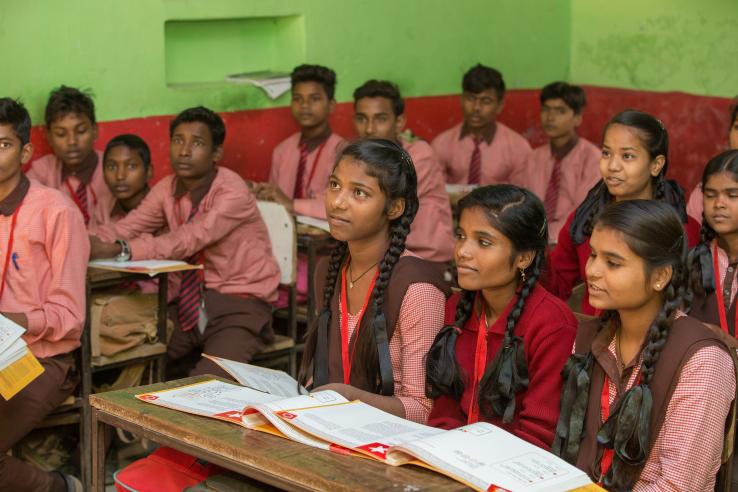 Chandigarh, India: The Government of Punjab’s Department of School Education launched a partnership today with Breakthrough and the Abdul Latif Jameel Poverty Action Lab (J-PAL) South Asia to integrate a gender sensitization curriculum for adolescents into the syllabus for all government schools in Punjab.

To change gender-biased perceptions and provide tools to enact behavioral change among adolescents, the Department of School Education will embed Breakthrough’s gender equality curriculum in schools during the upcoming academic year. The curriculum consists of a series of interactive, safe, and open discussions held over two and a half years to empower adolescents to transform their gender attitudes, aspirations, and behaviors.

In a randomized evaluation conducted by J-PAL South Asia in 314 government schools in Haryana, the curriculum was found to significantly shift the gender attitudes and behaviours of both boys and girls, and led students to enact more gender-equitable behavior. The evaluation was led by researchers Diva Dhar (University of Oxford), Tarun Jain (IIM Ahmedabad), and Seema Jayachandran (Northwestern University).

The Department of School Education will work with Breakthrough to train teachers to integrate the curriculum in grades 6,7, and 8. J-PAL South Asia will conduct an independent process evaluation to generate insights for sustained, high-quality, government implementation.

The partnership was launched by the Honourable Chief Minister of Punjab Captain Amarinder Singh on the occasion of International Women’s Day. To mark the event, Shri Krishan Kumar, Secretary of the Department of School Education, Punjab, said, “In service of our mission to transform gender outcomes in the state and achieve gender parity, I am delighted to launch this initiative to directly address gender discrimination and encourage the growth of gender equitable mindsets in our young citizens. The expansion of Breakthrough's gender sensitization program throughout Punjab will bring about a ripple effect as this curriculum begins to shift gender norms and behaviours of our students, who will grow to shape the fabric of our state."

Sohini Bhattacharya, CEO and President of Breakthrough, said, “Breakthrough is honored to partner with the Government of Punjab and J-PAL South Asia to bring systemic change to how we address gender equality. Applying a gender lens to the school syllabi and teacher training will lead to state-wide shifts in gender norms and go a long way in making sure that girls are valued and their dreams and aspirations are realized.”

Shobhini Mukerji, Executive Director of J-PAL South Asia, said, "Many gender gaps persist despite economic progress, making it important to intervene directly and early enough to change norms and attitudes in order to bring about a more gender equal society. In uniting the Government of Punjab’s commitment to improve gender outcomes with Breakthrough’s expertise in developing programs to change gender norms, this partnership offers tremendous potential to close the gender outcome gap by empowering every student with a gender equitable mindset and the tools to act upon it."

This initiative is part of an ongoing partnership between the Government of Punjab and J-PAL South Asia, wherein since 2017 J-PAL South Asia has worked with state departments to facilitate rigorous, policy-relevant research and the scale-up of successful programmes.