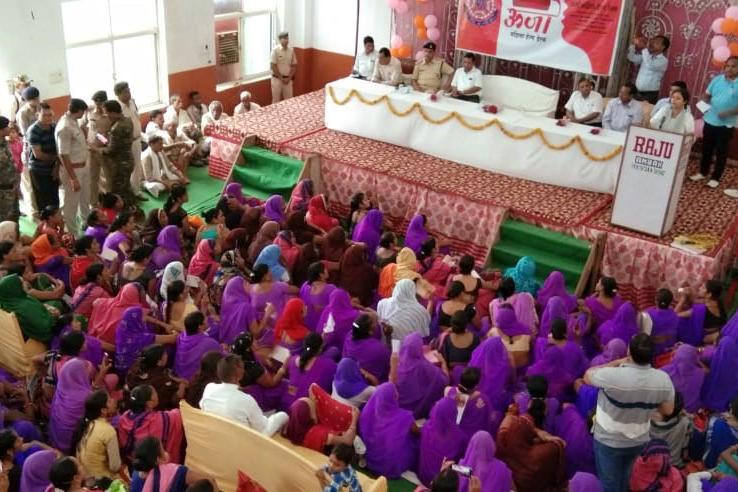 The study was funded primarily by the Crime and Violence Initiative of the Abdul Latif Jameel Poverty Action Lab (J-PAL), as well as the World Bank’s Sexual Violence Research Initiative, with supplemental funding provided by the University of Virginia’s Center for Global Inquiry and Innovation and the University of Oxford.

These findings, published on July 8 in Science, suggest that deliberate measures designed to make police officers more responsive to women’s security needs, and the presence of female officers in visible positions of authority, can be effective in making the police more accountable to women, and in increasing women’s access to the justice system.

India, which in a 2018 poll was named the “most dangerous country in the world to be a woman,” currently ranks 140 out of 156 countries on international measures of gender inequality and is home to some of the world’s highest rates of GBV. An estimated four in ten women in India report having experiencing domestic violence in their lifetimes.

Police reform is critical in addressing this crisis. A majority of crimes against women go unrecorded, thus inhibiting women’s access to the justice system. Women often hesitate to report violence, due in part to low levels of trust in the police. Even when women do report, the police are often dismissive, reflecting patriarchal norms that seek to “protect families” by minimizing legal cases, as well as political incentives to show lower crime rates.

From 2018 to 2020, researchers partnered with the Madhya Pradesh Police to evaluate the impact of a program that randomized the introduction of women’s help desks (WHDs) in 180 police stations serving 23 million people. WHDs offered a private space for women to make a complaint to an officer trained on gender sensitization and case registration procedures. Study police stations were randomly divided into three groups: control stations (without WHDs); “woman-run” WHDs assigned female officers; and “regular” WHDs that did not specify gender of the assigned officer (the majority of which were run by men).

Over the eleven months of the study, case registration of crimes against women and domestic violence increased significantly in police stations with WHDs compared to those without. Specifically, police stations with WHDs registered 1,905 more Domestic Incident Reports, which initiate civil court proceedings; and 3,360 more First Information Reports (FIRs), which initiate criminal proceedings. Notably, the increase in FIRs was driven entirely by the woman-run WHDs, highlighting the agency of female officers who appeared to be particularly responsive to WHD training. Female officers also exhibited a change in gender attitudes, becoming more likely to believe than dismiss the claims of women.

“These findings suggest that, to better serve women, we need women on the front lines in the police. But it’s not enough to simply add women; female officers need to be supported and valued for the critical work they do in increasing women’s access to justice,” said Sukhtankar.

“Crime against women is a major challenge for the Indian Police,” said Mr. Rishi Shukla, former Director-General of the Madhya Pradesh Police and former Director of the Central Bureau of Investigation. "Sincere systematic as well as innovative responses have been made over the years to encourage women to reach out to the police in times of need. In the state of Madhya Pradesh, we have been seeking evidence based policy making and implementation. J-PAL's research on this subject is significant, as it highlights the improved quality of response of the police to women needing assistance. The rigorous research has come up with excellent policy inputs which would improve access of women to the police and mainstream reforms at the Police Station level."

Shobhini Mukerji, Executive Director of J-PAL South Asia, said, “The study findings provide concrete and actionable insights to policymakers working toward reducing violence against women. Crimes against women are a major obstacle to development, especially in low- and middle-income countries. The ongoing scale-up and corresponding research will generate valuable insights on whether shifts in police attitudes and responsiveness to crimes against women can be sustained over time, which may be an important first step to encouraging increased reporting of these crimes.”

While these results suggest cautious optimism about the potential of gender-targeted policing, increased case registration is just a first step in increasing responsiveness to women’s security concerns and, ultimately, in addressing the epidemic of GBV in India. Sustained action to advance women’s cases through the justice system, as well as broader social and economic support for women, will be necessary to create deeper changes.

The Madhya Pradesh Police is currently scaling up the WHD program to 700 police stations serving most of the state, informed by the findings of the study. With continued support from J-PAL’s Innovation in Government Initiative, the researchers will examine whether the observed changes in police behavior can be sustained, as well as whether and how the program adapts at scale.

The Abdul Latif Jameel Poverty Action Lab (J-PAL) is a global research center working to reduce poverty by ensuring that policy is informed by scientific evidence. Anchored by a network of more than 260 affiliated professors at universities around the world, J-PAL conducts randomized evaluations to answer critical questions in the fight against poverty. We build partnerships with governments, NGOs, donors, and others to share this knowledge, scale up effective programs, and advance evidence-informed decision-making. J-PAL was launched at the Massachusetts Institute of Technology in 2003 and has regional centers in Africa, Europe, Latin America and the Caribbean, the Middle East and North Africa, North America, South Asia, and Southeast Asia.