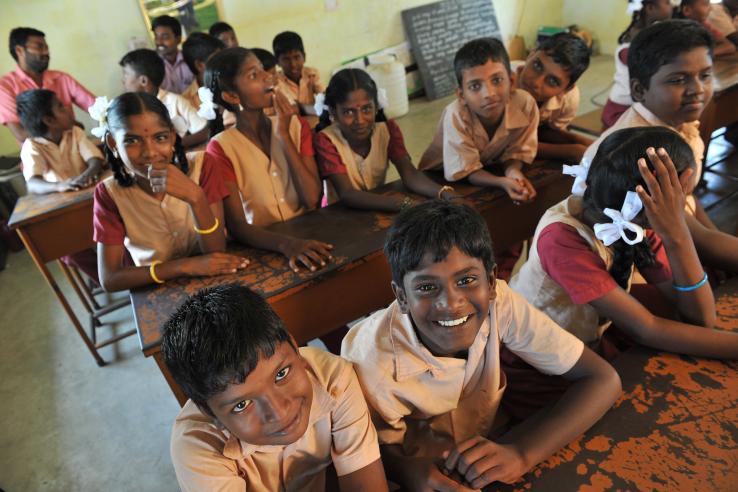 The Government of Odisha has identified education as one of its key priority areas under ASPIRE.
Photo: Marco Saroldi | Shutterstock.com

New Delhi, India: The Abdul Latif Jameel Poverty Action Lab (J-PAL) South Asia and Veddis Foundation announced the launch of the Alliance for Scaling Policy Impact through Research and Evidence (ASPIRE) today. ASPIRE aims to spur the adoption of anti-poverty policies rooted in scientific evidence and data. Veddis Foundation is anchoring ASPIRE with an investment of US$6.3 million.

ASPIRE is designed to bring together governments, donors and nonprofits to solve some of the most pressing challenges Indians living in poverty are facing today, building on J-PAL South Asia’s 15 years of work in poverty reduction in the country.

Over 100 million people across 20 Indian states have been reached by programmes and policies that have been informed by studies done by researchers who are part of J-PAL’s global network.

J-PAL is recognized worldwide for its work in using rigorous scientific evidence to help policymakers; J-PAL co-founders Abhijit Banerjee and Esther Duflo were awarded the Nobel Prize for Economics in 2019 for their pioneering work using randomised evaluations in alleviating global poverty.

ASPIRE will help J-PAL South Asia respond even more effectively to the policy priorities of governments, with the goal of rolling out innovative policy solutions that have been tested for effectiveness with randomised evaluations.

J-PAL South Asia will enter into long-term partnerships with governments and do a thorough examination of the policy challenges hindering poverty eradication. The alliance also plans to run pilot studies on prospective solutions and to scale up the most promising ones.

An initiative like ASPIRE is more urgent now than ever.

The economic crisis triggered by the Covid-19 pandemic threatens to undo the gains India has made over the years in poverty alleviation. It is vital for governments to implement policies with proven effectiveness to support the people whose lives have been upended by the pandemic.

Shobhini Mukerji, Executive Director, J-PAL South Asia said: “ASPIRE has been conceived to make scientific evidence and data the bedrock of policymaking in India. It is only by advancing policies that are backed by solid evidence of effectiveness can governments succeed in improving the lives of the poor and the vulnerable in a timely, holistic and effective manner. The grant from the Veddis Foundation opens up exciting new possibilities for us to establish new, long-term partnerships with multiple state governments and central agencies.”

Murugan Vasudevan, CEO, Veddis Foundation said, “Philanthropy can drive transformational positive impact by building stronger state capacity. We are glad to be partnering with J-PAL in setting up ASPIRE. J-PAL brings a rare combination of rigor, innovation, and demonstrated results in shaping data-driven policies that form the bedrock of good governance. We look forward to seeing ASPIRE become a trusted partner to governments and philanthropists looking to drive impact at scale.”

ASPIRE draws on one of J-PAL’s greatest strengths: the combination of groundbreaking research produced by its network of the world’s top development economists and the expertise of its local research staff and policy specialists. This model has enabled J-PAL South Asia to streamline the process of translating cutting-edge academic research insights into actionable policies for its government partners.

As a first step under ASPIRE, J-PAL South Asia will roll out the Taaron ki Toli programme across 23,000 state-run schools in Odisha. J-PAL South Asia will also assist the Government of Odisha in evaluating the efficacy of potential solutions to the biggest policy challenges in the areas of livelihoods and labour welfare, education, gender, distress migration, and early childhood development. These have been identified by the government as its top priority areas for poverty reduction.

The Abdul Latif Jameel Poverty Action Lab (J-PAL) is a global research centre working to reduce poverty by ensuring that policy is informed by scientific evidence. Anchored by a network of 262 affiliated professors at universities around the world, J-PAL conducts randomised impact evaluations to answer critical questions in the fight against poverty.

J-PAL was launched at the Massachusetts Institute of Technology in 2003 and has seven regional offices around the world. J-PAL South Asia, hosted by the Institute for Financial Management and Research (IFMR), Chennai, has formal partnerships with governments across 20 Indian states and union territories for the generation of new research and advancement of evidence-informed policymaking, as well as training partnerships with the governments of Nepal, Bhutan, Bangladesh, and Pakistan.

Veddis Foundation supports organisations working at the intersection of technology and policy to create lasting impact at scale. With a mission to create deep and irreversible social change, the Foundation also works directly with governments on effective public service delivery. The Foundation takes an evidence-based approach to supporting institutions doing radical work. It hopes to bring analytical rigour and a collaborative spirit to philanthropic investments with a goal to achieve measurable outsized impact.

Founded by Vikrant Bhargava, a successful tech entrepreneur and alumnus of IIT Delhi and IIM Calcutta, Veddis Foundation has worked directly (and indirectly) with multiple state governments and supported over 100 organisations, representing some of the most credible and innovative initiatives in the social sector. It also incubated LetzChange.org, which is now the tech platform powering GiveIndia’s retail fundraising platform.

Read more about the organisation here.