Can information lead to better voting decisions? Evidence from information campaigns in India 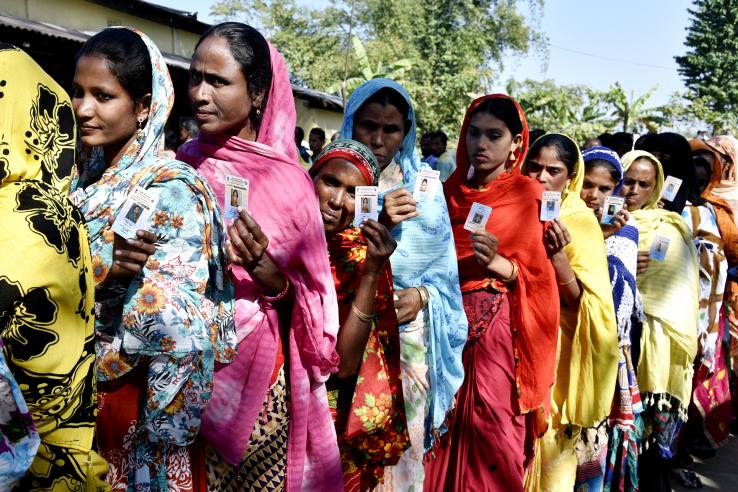 Women stand in a queue at a polling station in Barpeta, Assam, India in December 2018.
Photo: David Talukdar | Shutterstock.com

Out of 539 winners in India’s 2019 general election for the lower house of Parliament, 29 percent have, at some point, been charged with serious criminal cases, including cases related to rape, murder, attempt to murder, kidnapping, and crimes against women.

This represents an increase of 109 percent in the number of Members of Parliament (MPs) with declared serious criminal cases since 2009. Recent research suggests that MPs with criminal backgrounds reduce economic growth and increase poverty and crime in their constituencies.

So why do voters elect criminal politicians into office? Often, they aren’t aware of the charges against candidates running for office.

The information gap extends to other areas as well; many voters aren’t aware of candidates’ policy positions or voting records, and instead vote along caste lines.

An analysis of post-electoral surveys for national and state elections from 1962–2014 concludes that the main driver of voter choice during this period was caste and religious identification. Research suggests that this can negatively affect legislator quality, and lead to a higher incidence of political corruption.

How, then, can voter decision-making be improved? Evidence from randomized evaluations in India suggests access to information can drive voters away from voting along caste and ethnic lines, and towards choosing more qualified (less criminal) candidates who are more closely aligned with the voter’s preferences.

A possible cause for voting along caste and religious lines could be a lack of information about the quality of candidates. If this were the case, information about candidate performance and qualifications should allow voters to better determine who would serve their interests.

To test this, researchers published and distributed report cards on politicians in a random sample of slums in the run-up to the 2008 assembly elections in Delhi. These report cards contained information on the performance of incumbent legislators and the educational qualifications of all candidates, and were distributed through newspapers.

This supports the hypothesis that providing information about politicians can alter voting behavior, and can direct votes towards better performing and more qualified politicians.

In this intervention, the use of print media allowed the researchers to reach almost one million voters. While a large number, this is only a small fraction of the nearly 425 million newspaper readers in India, underscoring the potential to apply similar interventions at a national scale.

Can caste-based voting be reduced?

To examine whether providing information about the responsibilities or performance of elected officials can shift voters away from casting their ballot along ethnic or religious identity lines, researchers conducted a randomized evaluation in Uttar Pradesh, a state where caste plays a prominent role in voter behavior.

Researchers, along with the local NGO Sarathi, evaluated the impact of information campaigns, in the form of meetings, posters and a puppet show, on voter behavior.

The information campaigns led to an increase in voter turnout, a reduction in voting along caste lines, and a decrease in voting for candidates with criminal backgrounds.

This evaluation suggests that interventions which emphasize the importance of voting to enable development may reduce caste-based voting behavior by presenting a new evaluative criterion that voters can use, in this case one centered around development issues.

Adverse effects and the role of voter coordination

A distinguishing feature of the experiments summarized here is that both have focused on information related to either performance or educational qualifications and criminal histories, in contexts where voters were unlikely to have very strong prior beliefs.

In Mexico, reports about corruption by mayors distributed via leaflets leading up to the 2009 election actually reduced voter turnout. Researchers suggested that information that validated voters’ beliefs about the pervasiveness of corruption actually discouraged them from participating in the political process.

Additionally, the ability for voters to coordinate their response and act collectively to punish criminal candidates can play an important role in the success or failure of a particular intervention.

In an evaluation carried out before the 2017 assembly elections in Uttar Pradesh, where voters were given information about criminal charges against candidates via mobile phones, results were strongest when voters were notified that other voters were also receiving the same information, enabling citizens to coordinate a collective response.

While several factors influence voting decisions, information campaigns can address one barrier faced by voters, that of a lack of information.

Rigorous evidence from India and other developing countries shows that in general, information campaigns that provide information on candidates’ policy positions and performance lead to an increase in vote share for less corrupt and better performing candidates, and are most effective when the information is widely disseminated from a credible source.

Information can be a powerful accountability mechanism, by not only allowing voters to select higher performing candidates, but also by helping them monitor incumbents when they are in power.

The evidence shows that information campaigns tested rigorously through randomized evaluations can guide us to context specific solutions. It is time to leverage evidence to make every vote count.