Last updated:
Providing information on candidates’ qualifications, policy positions, and performance in office can affect voter turnout and who people vote for. In lower-income countries, this type of information has been most effective when it was widely disseminated from a credible source. 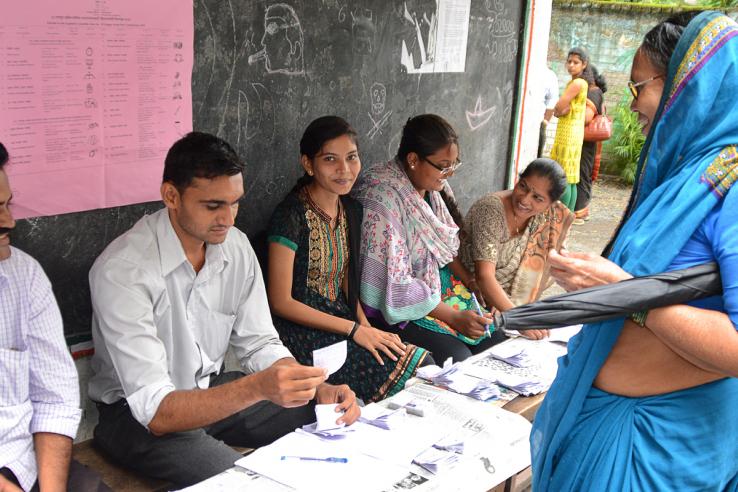 While democracy has expanded around the world in the last century, transparency and accountability for elected officials remain a challenge. Voters may lack information about the qualifications and policy positions of candidates, making it difficult to make an informed vote choice. Lacking information, voters may be offered gifts and special privileges in exchange for votes, or may opt to vote in line with identity groups. This can lead to electing officials who are not incentivized to be responsive to their constituents.

Several randomized evaluations of information campaigns designed and implemented by local and international NGOs find that information about candidates can impact who citizens vote for. But under certain conditions, information can have limited or negative impacts.

Taken together, evidence suggests that providing voters with information about candidates, when information is widely disseminated and credible, can lead to more qualified and accountable candidates being elected. In multiple cases this leads to more responsive governance and improved service delivery.

Information on policy positions: In Sierra Leone and Uganda, information delivered directly from candidates through public and private video screenings increased voters’ awareness of candidates’ policy positions. Also in both countries, voters who watched these videos were more likely to vote for a candidate who shared their policy preferences [5] [13].

In the Philippines, after two consecutive mayoral elections in which a local NGO distributed leaflets to households with information on the existence of public programs and candidates’ promises regarding those programs, voters in those households were more likely to vote for candidates whose promises were closest to their own preferences. This effect was not evident after just one election [8].

Information on performance in office: In Brazil, releasing public audit information about mayors’ corruption violations prior to elections initially decreased reelection rates of corrupt incumbents, and “clean” incumbents were reelected at a higher rate. Impacts were strongest in communities where information was shared via local radio, suggesting that more accessible information had a stronger influence [9].

Information about charisma and qualifications: In Sierra Leone researchers compared the impacts of radio reports of candidates’ policy positions to video screenings of debates featuring the candidates themselves. They found that while both radio reports and video debates increased voter knowledge, only debates led voters to change their policy views and vote choices. This suggests that general information related to candidates’ persuasiveness and charisma, combined with policy information, had a stronger effect than policy information alone [5].

In India, providing voters with information on candidates’ educational qualifications, financial assets, and criminal histories delivered via report cards to households led to more qualified candidates being elected to office [4].

Also in India, providing voters with information on candidates’ criminal histories delivered via voice and text messages to mobile phones led voters to change their vote choice away from candidates with severe criminal charges and toward “clean” candidates, and increased voter turnout. This information was most effective, as in the Adida et al. 2017 study in Benin, when recipients were also informed that the information had been shared widely with others in their area, enabling citizens to more easily coordinate their response [11].

In certain contexts and implementation conditions, information can have limited or negative impacts. Level of information dissemination, voters’ prior beliefs, and prevalence of vote-buying can lead to unintended effects.

Dissemination: In Uganda, information on incumbent politicians’ performance delivered via public scorecards had no effect on candidates' vote shares, in part due to limited dissemination (only one in eight citizens reported being aware of the scorecards), among other factors [12].

In Benin, information on incumbent politicians’ performance delivered via video screenings in households changed peoples’ vote choice only when it was widely disseminated and accompanied by a short explanation of the relevance of the information to citizens. This information was most effective—as in the George et al. 2018 study in India—when recipients were informed that others in the region had also viewed the videos, possibly because it enabled them to more easily coordinate larger-scale response. Information that was widely disseminated without explanation of its relevance had no effect on vote choice [1].

Voters’ prior beliefs: In Mexico, mayoral corruption reports delivered to households via leaflets leading up to the 2009 election reduced voter turnout. The reports may have confirmed voters’ negative beliefs about the pervasiveness of corruption in politics, and/or simply discouraged voters from participating in the political process [6].

Similar reports leading up to the 2015 election in Mexico had mixed effects: Information delivered to households via leaflets that revealed levels of corruption that was unsurprising to voters led to lower voter turnout and actually increased support for (corrupt) incumbents. In contrast, reports that revealed extreme corruption that surprised voters led to higher voter turnout and less support for incumbents. This underscores the importance of voters’ prior beliefs in anticipating how information affects voter behavior [2].

Vote-buying: In the Philippines, information about candidates’ policy positions delivered to households via leaflets by a local NGO in the week prior to a mayoral election did not affect vote shares or turnout, and voters who received leaflets were more likely to be targeted for vote-buying than those who did not. The information may have raised voters’ expectations of incumbents, and because incumbents did not have sufficient time to attempt to attract votes through better performance (improving service delivery, for example), they turned to vote-buying, a common practice in this context [7].

Time and context were also factors: After receiving this information in two consecutive mayoral elections, voters were more likely to vote for candidates whose promises were closest to their own preferences. This may be because incumbents put more effort into providing public goods, voters became more aware of local policies, and voters and incumbents had reason to believe that voters would “punish” incumbents who did not fulfill their policy promises [8].

Providing information about candidates to voters prior to elections can change the behavior of elected officials, but evidence of long-term effects on public officials’ behavior change is mixed.

Provision of information can create incentives for officials to perform differently once elected. In Sierra Leone, politicians elected in areas where debates were screened increased development assistance spending in their constituencies, a proxy measure for service delivery and responsiveness to constituents’ needs. This was likely due to a combination of factors, including politicians’ increased perceptions of the ability of voters to hold them accountable, and increased media scrutiny in areas where debates were viewed [5].

In Brazil, publicly released audits containing information on incumbent mayors’ use of federal funds reduced corruption levels in audited municipalities over a ten-year period. This effect, however, was not the result of electoral accountability, but of legal accountability. This suggests that electoral accountability alone may not be sufficient to change elected officials’ corrupt behavior in the long run, especially if public officials are able to adjust their electoral strategies or find alternative forms of corruption. Channeling resources to effective legal systems is thus an important step toward sustainable reduction in corruption [3].