When implementing targeted food programs, governments might choose to provide transfers either in-kind or via vouchers, which could lead to different outcomes. Researchers partnered with the Government of Indonesia to measure the impact of replacing the delivery of their food assistance program from in-kind transfers to electronic vouchers on household welfare. The reform was more effective in delivering assistance to targeted beneficiaries and helped reduce poverty among the poorest households at lower costs.

Targeted food programs, which aim to provide nutritional assistance to low-income households, are one of the most common forms of social welfare programs in the world.1  When implementing such policies, governments can choose between providing in-kind transfers, such as food baskets, or vouchers, which can be used to purchase food on the market. Although policy actors might expect both forms of delivery to have similar outcomes, evidence has shown that is not the case.2 On one hand, vouchers usually offer more flexibility for beneficiaries’ consumption choices compared to in-kind transfer, allowing households to adjust the mix of items consumed. On the other hand, in-kind food transfers could reduce overall prices relative to voucher programs, especially in remote and isolated areas. Furthermore, in-kind transfers could help screen for eligibility for those who are poor given the lower quality of the food provided.

Besides these main outcomes, a government’s ability to administer the program on the ground can also vary greatly, especially in areas with low state-capacity. Vouchers and in-kind transfers both present different logistical challenges including connectivity, authentication system, or the local government’s control over how resources are distributed. That said, what is the most effective way to provide food assistance to vulnerable populations in order to reduce poverty?

In 2017, Indonesia began to reform its largest in-kind food assistance program, Rastra, by replacing it with a voucher program, the Non-Cash Food Assistance (BPNT), now known as Program Sembako. The Rastra program provides subsidized food assistance to 15 million households every month and had an annual budget of US$1.5 billion in 2012. In the Rastra version, eligible households received 10kg of free rice per month, which was distributed door-to-door by the local level officials. Under BPNT, households receive a monthly voucher of IDR 110,000 (US$8) per month, added to a debit card issued to the female adult in the household. They can then redeem the value for rice and eggs at any registered retailers. The program identifies eligible households through proxy-means testing (PMT), which is used to predict consumption distribution by collecting information about households’ assets and composition (see more information here).  In order to receive the transfer, households must have a PMT smaller or equal to 30.

The reform was carried out in order to solve challenges faced by the Rastra program, such as many non-poor households receiving rice and eligible households receiving only a fraction of their entitlement.3 Rastra was also well-known for high levels of overall leakages4 and low quality of rice.5 By moving to electronic vouchers (or e-vouchers), the government also believed it could improve program satisfaction by increasing rice quality and food diversity, as households are allowed to purchase eggs. Understanding how this reform affects the quality of social assistance and beneficiary welfare is of key importance for the Government of Indonesia. 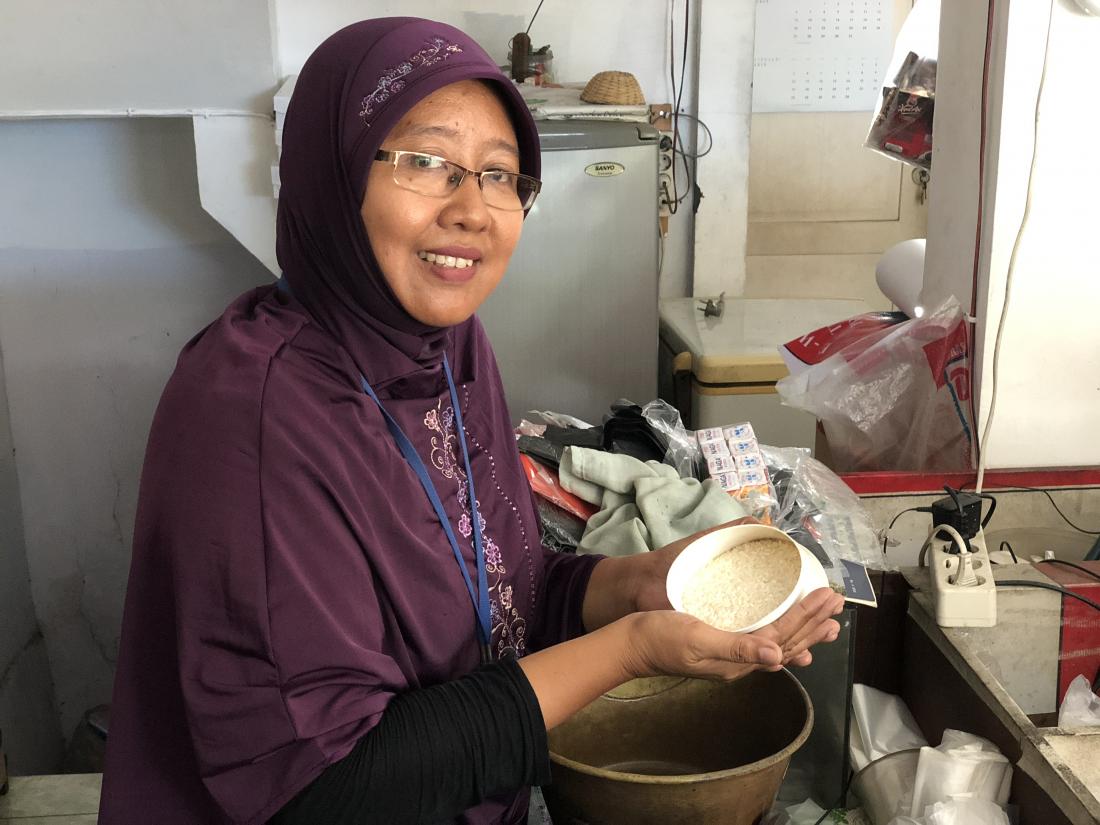 Researchers partnered with the Government of Indonesia to compare the efficacy of vouchers versus in-kind transfers in reducing poverty and improving program delivery. In 2018, during the second phase of the reform, budget constraints prevented the government to follow the plan of converting 105 new districts from Rastra to BPNT. This allowed researchers to randomly assign 42 of these districts to receive the new program that year, while the remaining 63 districts were assigned to receive the program in 2019—serving as a comparison group. This resulted in a sample of 53 million individuals and about 3.4 million households–about a fifth of Indonesia’s population. Researchers used administrative data, including the Indonesian national household survey (SUSENAS), to collect information on program recipients, amount, price, and quality of subsidized rice and eggs, as well as poverty measures.

The change from in-kind food transfers to vouchers led to an increase in subsidies received by eligible households, thanks to better targeting. As a result, poverty fell by 20 percent among the poorest households. Vouchers also allowed households to purchase higher-quality rice, and led to increased consumption of egg-based proteins.

The new BPNT program increased value of subsidy received among poorest households: On average, eligible households, or households with PMT <= 30, in BPNT districts received about 45 percent more in subsidy in voucher districts, e.g., IDR 13,235 (US$0.94) additional per month, compared to IDR 29,200 (US$2.14) per month in in-kind districts.

The reform was also effective in improving the quality of rice received: Recipient households rated the voucher rice substantially higher quality. The quality improvements in the voucher program were likely a result of households having more flexibility to choose where they could get the rice from, instead of it coming from only one provider as in the in-kind transfer.

The BPNT voucher improved the targeting of the food assistance program: Relative to the in-kind distribution, vouchers helped concentrate aid to targeted groups. There was a reduction in the number of people who received any subsidy under BPNT, but the reduction was larger for those who were above the eligibility cut off. The probability of receiving any assistance fell by 10.5 percentage points from a comparison group average of 66.9 percent (a 16 percent decrease), while non-eligible households had 49 percent less chance of getting the subsidy (a 14.4 percentage points decrease from a comparison group average of 29.3 percent).

The reform reduced poverty among poor and near-poor households: The increase in the subsidies received reduced poverty among low-income households. For households with PMT <= 15, the BPNT program reduced poverty by 20 percent (a 4.3 percentage points reduction from a mean of 21 percent in comparison group). The reduction in poverty was even greater, 24 percent, for the poorest households, i.e. with PMT < 5 (a 6.5 percentage points reduction from an average of 26.7 percent in the comparison group). In addition, poverty reductions appear to come from a shift in how aid was distributed, not from reductions in overall leakage levels.

Aggregate rice price was not affected, although in remote villages it did increase modestly: Overall, there was no observable impact on the average rice prices, except for the most remote villages, where the voucher led to a 3.6 percent increase in prices compared to areas with in-kind transfers. However, this was not enough to negate the benefits gained from BPNT, as the increase in overall rice spending in these remote areas was lower than the increase in benefits received by eligible households.

The Government of Indonesia continued the reform to expand the coverage of the BPNT program, reaching over 18.8 million of households across the country, and increase the amount to IDR 200,000 (US$14.3) in 2020. The result of the research has provided evidence for the government to move forward with the digitization of the social protection system and the involvement of financial service providers in the social protection program delivery.