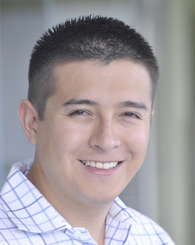 Marco Gonzalez-Navarro is an Assistant Professor in the Department of Agricultural and Resource Economics at the University of California, Berkeley. His research area is development, focused on basic infrastructure in developing countries. His ongoing work examines the effect of sustainable rural clean water access in Brazil on children's health and adults' labor decisions.

I would love to implement a randomized evaluation in which people who live in areas experiencing negative economic shocks, or who simply happen to be born in places with very limited economic opportunities, are offered either grants, network support, or information in order to help them move to places that are more economically vibrant.

Growing up in both Mexico and the United States made me confront from a very young age starkly different living standards, government services, and even individuals’ aspirations between the two countries. Once in college, it was clear to me that economics was the discipline most adept at answering and understanding these issues. I stumbled upon Robert Lucas’ 1988 paper, “On the Mechanics of Economic Development,” in which he makes the point that once you start thinking about the issue of comparative development, it is hard to think of anything else. This rang very true to me.

It was not until graduate school, however, that I came to know applied microeconomics research. After taking Angus Deaton’s course at Princeton, I was certain that I wanted to pursue a career in development economics.

I’m very excited about a new paper with Gustavo Bobonis (University of Toronto), Paul Gertler (UC Berkeley), and Simeon Nichter (UC San Diego) on how citizens’ vulnerability to negative shocks heightens their willingness to engage in clientelism (the exchange of contingent private benefits for political support) with local politicians—a phenomenon with important implications for democratic accountability and responsiveness.

In our paper, we use a randomized evaluation in northeast Brazil to show that when households are less vulnerable to economic shocks like crop losses or unexpected medical expenses, they decrease requests for private benefits from local politicians in exchange for their electoral support.

Importantly, we also show that reduced household vulnerability undermines the electoral performance of incumbent mayors during their reelection campaigns. Since political clientelism is especially common among incumbents—given their ability to more easily access government coffers, programs, and employees—it confers an unjust incumbency advantage which makes it hard to defeat sitting mayors. The findings of the study show that improving households’ ability to deal with economic shocks can also improve democratic functioning.

I would love to implement a randomized evaluation in which people who live in areas experiencing negative economic shocks, or who simply happen to be born in places with very limited economic opportunities, are offered either grants, network support, or information in order to help them move to places that are more economically vibrant. Understanding the frictions underlying these decisions may have tremendous implications over generations, and in the face of shocks from climate change or local economic disruptions from trade or technological changes, it seems to me like an attractive policy tool that has not been studied or explored sufficiently. Some recent work, such as Bryan, Chowdhury and Mobarak (2014), shows that there may be large gains from these types of policies.

I was once entering Brazil for the above-mentioned evaluation with a big suitcase containing a lot of materials for the household survey. Unfortunately, for the first time in my life, I was stopped coming into Brazil for a customs check. The officer opened up my suitcase and immediately became suspicious. What were all these funny dice, poker chips, and colored bags in the suitcase?

I began to worry that these materials, crucial for the survey that we were launching that same week, would be lost and this would prevent some major components of the survey from being carried out! I started nervously mumbling that I was doing a survey and these were materials to conduct it. “But what were the chips for?” the customs officer asked.

I explained that we would play games with participants, to which the officer rightly objected by informing me that gambling is illegal in Brazil. I kept explaining that it was not real gambling, but rather a game, and explained the mechanics of a public goods game. I started getting a sinking feeling that I was doomed. Actually hearing myself explaining this, I felt ridiculous and thought the officer was right not to believe me.