Political clientelism is often deemed to undermine democratic accountability and representation. This study argues that economic vulnerability causes citizens to participate in clientelism. Researchers tested this hypothesis with a randomized control trial that reduced household vulnerability through a development intervention: constructing residential water cisterns in drought-prone areas of Northeast Brazil. This reduction in vulnerability significantly decreased requests for private benefits from local politicians, especially by citizens likely to be involved in clientelist relationships. Researchers also show that this reduction in vulnerability decreased votes for incumbent mayors, who typically have more resources to engage in clientelism. The evidence points to a persistent reduction in clientelism, given that findings are observed not only during an election campaign, but also a full year later.

Many low- and middle-income countries have adopted democratic forms of government with a primary objective of heightening political representation. However, democratic political institutions have often failed to provide broad representation of poor and vulnerable citizens, who are frequently the majority of constituents. Substantial research suggests that clientelism—the exchange of contingent benefits for political support—is an important reason why many elected politicians are neither accountable nor responsive to their constituencies. Among the numerous pernicious consequences, many argue that clientelism exacerbates governmental allocative inefficiencies and undermines the functioning of democratic institutions, leading to both reduced political competition as well as the under-provision of public goods and social insurance.

This study focuses on ongoing clientelist relationships in which politicians provide private benefits to citizens conditional on their political support. Why would citizens participate in such clientelist arrangements? Of the many possible factors, perhaps none is more widely discussed than poverty. Economic theory suggests that low-income households may place greater value on private consumption than on political preferences or public goods provision, relative to wealthier households. In addition to the level of income, the uncertainty of income also contributes to overall economic vulnerability. How does economic vulnerability affect citizens’ participation in clientelism and what are the consequences of clientelism for electoral outcomes?

This study focuses on Brazil’s semi-arid zone, the vast majority of which is located in the country’s Northeast region. The zone spans over one million square kilometers, and its population of over 28 million residents is disproportionately low-income and rural. It is characterized by far lower average precipitation and higher rainfall variation than the rest of Brazil. In 2012, the zone’s average precipitation was just 57.2 centimeters (cm), compared to 153.1 cm in the rest of the country. A fundamental source of vulnerability is the region’s exposure to recurring droughts; rain falls only sporadically and evaporates quickly due to the topography and temperature. With limited financial resources and poor access to healthcare, the region’s 28 million residents have scant tools to protect themselves from economic and health shocks.

Local politicians in Brazil, including mayors and councilors, have substantial discretion over local public spending, and access to local services is often contingent on past electoral support. Such forms of clientelism are a longstanding feature of Brazilian politics. A 2014 survey by the Latin American Public Opinion Project (LAPOP) found that 10.7 percent of Brazilians were offered a benefit in exchange for their vote in that year’s state and federal elections. In this study’s context, researchers found that voters were more likely to publicly declare support for politicians and more likely to request private help from politicians when they experienced droughts, suggesting that vulnerability increases clientelism in this region. 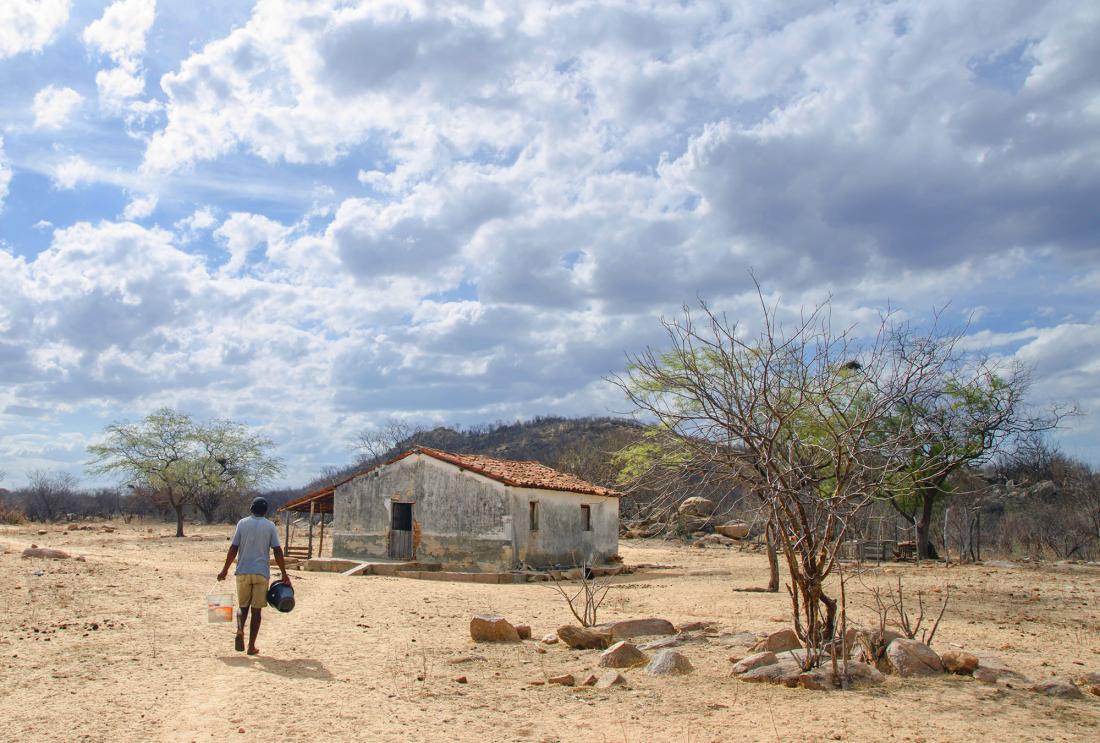 In partnership with the NGO Brazilian Semi-Arid Articulation (ASA), researchers conducted a randomized evaluation of a household water cistern construction program to test the impact of economic vulnerability on clientelism. From the government’s registry of social program beneficiaries, researchers randomly selected 425 neighborhood clusters (logradouros), including 1,308 households, from forty municipalities in Northeast Brazil to participate in the evaluation. 615 households were randomly assigned to receive water cisterns for free; the other 693 households formed the comparison group and were assigned not to receive cisterns. ASA constructed the cisterns starting in January 2012,  before the October 2012 municipal elections.

The rain-fed water cisterns were intended as a strategy for low-income, rural households to cope with droughts by allowing them to collect and store rainfall from the roofs of their houses. Households could also purchase and store water in the cisterns, in case rainfall was insufficient for their needs. The cisterns aimed to reduce households’ vulnerability to water shortages and their need to depend on politicians for water supplies.

The water cistern program reduced economic vulnerability among households with cisterns, reduced clientelism in these clusters, and negatively impacted the performance of incumbent mayors vying for reelection.

Impact on Vulnerability: On an index of vulnerability including measures of depression, child food security, and self-reported health, households assigned to receive water cisterns were 0.13 standard deviations less vulnerable than households in the comparison group.

Impact on Clientelism: The intervention reduced requests for private goods from local politicians by 17 percent (3.0 percentage points). These effects were concentrated among citizens who frequently interacted with politicians (at least once per month before the electoral campaign started), and were thus more likely to be in clientelist relationships. Among this group, requests for private assistance from local politicians were 10.9 percentage points lower (including requests for water, construction materials, or medical intervention), a 38 percent reduction relative to frequent interactors in the comparison group. These reductions in clientelist interactions persisted through the following year, after the elections. Among those who did not interact with politicians frequently, the water cisterns did not have an effect on requests.

Impact on Voting Behavior: In municipal voting machines where more households received cisterns, incumbent mayors received fewer votes; for each person assigned to intervention in a municipality, the incumbent mayor received approximately 0.1 fewer votes. Challengers to the incumbent, meanwhile, received 0.25 more votes per person that was assigned to receive a cistern, indicating that voters were changing their minds and expressing support for an opposition candidate rather than choosing not to vote.