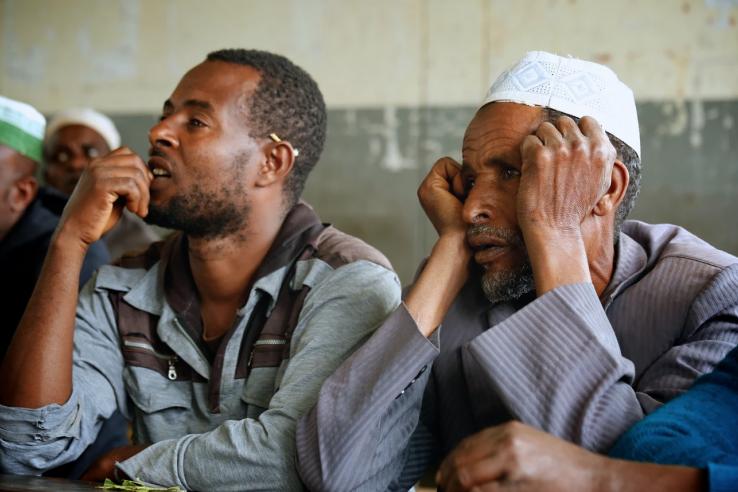 Men participating in one of the UBL program sessions in Ethiopia.
Photo: Garrick Ng | Studio Amarelo

Globally, 30 percent of women will experience physical and/or sexual violence by an intimate partner in their lifetime. The well-documented health consequences of intimate partner violence (IPV) include injuries, unintended pregnancies, sexually transmitted infections, long-lasting mental illnesses, and, in the most extreme cases, death. IPV survivors are also subject to economic and social costs, such as reductions in income and productivity and social stigma.

Moreover, with the spread of COVID-19, many countries are witnessing a rise in cases of IPV. Lockdown measures have restricted women’s mobility and increased economic strain and familial stress, thus exacerbating the threat of violence within households (learn more about the impacts of COVID-19 on IPV here).

Over the past decade, researchers and practitioners have been increasingly dedicated to designing and evaluating programs focused on preventing and reducing IPV and its consequences. A growing body of evidence suggests that gender inequality, especially social norms that endorse violence against women, is one of the main drivers of IPV. Across Africa and Asia, for example, between 30 and 60 percent of women agree that a husband is justified in beating his wife under certain circumstances. There remain important questions, however, on how to shift these norms.

What programs can effectively build more gender equitable attitudes and behaviors, and do these behaviors translate into reductions in violence against women by intimate partners?

Unite for a Better Life

In order to answer this question, Drs. Vandana Sharma and Jessica Leight partnered with EngenderHealth, Addis Ababa University, and the Ethiopian Public Health Association to design a program that would help address the issue of IPV in rural Ethiopia—where over 70 percent of women have experienced physical and/or sexual violence in their lifetime.

This partnership resulted in Unite for a Better Life (UBL), a gender-transformative, participatory intervention delivered to men, women, and couples in the context of the coffee ceremony—a traditional forum for community-based discussion in rural villages in Ethiopia.

In order to maximize the potential effectiveness of UBL, the researchers developed the content and implementation strategy through consultations with community members and held workshops with village leaders and government officials to ensure buy-in and support from the local communities. Most importantly, the exercises and discussions around gender and power were integrated within an existing cultural practice—the coffee ceremony—that served to connect the intervention to participants’ daily lives.

The coffee ceremony is an integral part of social and cultural life in Ethiopia, as well as a forum for discussions and conflict resolution. Traditionally, women prepare and serve the coffee during a ceremony of several hours. The ceremony thus provided a practical opportunity for UBL facilitators to start discussing gender norms and model more equitable behaviors as men were challenged to take part in what is traditionally perceived as a “female” task.

Researchers then conducted a randomized evaluation to understand the impact of UBL on IPV and HIV behaviors. Villages in rural Ethiopia were randomly assigned to one of four groups: men’s UBL, women’s UBL, couples’ UBL, or the comparison group.

This design allowed the researchers to compare the relative effectiveness of UBL when delivered to women only, to men only, or to couples. A summary of the evaluation is forthcoming, and the full evaluation can be read here.

What makes UBL an innovative program?

The UBL program was developed between 2013 and 2015. At that time, few gender training programs had been evaluated in rural or low-income settings. UBL differed from pre-existing programs in the following ways:

The UBL intervention reduced IPV when delivered to men

When estimating the impacts of the UBL program on IPV, researchers found a somewhat surprising result: reductions in IPV occurred only in households where men participated in the program with other men. In communities where the men’s UBL program was implemented, men reported perpetrating less sexual IPV in the previous year, and their partners also reported fewer instances of sexual violence during that same time period. As to physical IPV, the researchers only observed reductions in male perpetration of this type of violence among the highly adherent sample in the men’s UBL group, who participated in at least 12 of the 14 UBL sessions.

Previous evidence has stressed the importance of engaging women and men in social norms and behavior change interventions in order to reduce IPV. However, little is know about how changes can be achieved when participants engage in such programs with same-sex peers, compared to mixed groups. This evaluation finds UBL was effective when delivered in men-only groups, suggesting participants might need sufficient time to engage with their peers in same-sex groups, especially when discussing sensitive topics, in order to enable reflection, challenge norms, and support and reinforce desired outcomes.

The program also led to healthier and more equitable relationships

While UBL did not lead to impacts on IPV indicators when delivered to groups of women or couples, it did increase support for gender equitable norms and behaviors among men and women in all groups. For instance, participants reported increases in male involvement in childcare and household tasks. In the men’s and couples’ UBL groups, the results also suggest that household decision-making became more equitable between men and women due to the program. Finally, men in the male UBL group also reported significantly improved knowledge of IPV.

In addition, across all UBL treatment groups, both men and women reported improvements in a range of HIV-related outcomes, including condom use at last intercourse, HIV testing, and discussing sex and HIV risk with their partner.

What can UBL teach us about preventing IPV?

The ongoing COVID-19 pandemic has imposed an array of unprecedented challenges globally.  As existing inequalities are exacerbated and the delivery of development and humanitarian programming is impeded or altered, women and girls have been disproportionately affected. In this context, response efforts, including those to address IPV, should draw on insights from rigorous impact evaluations such as the UBL evaluation—even if conducted pre-pandemic.

Evidence from UBL has widened our understanding of effective strategies to build gender equitable attitudes and behaviors, and reduce violence against women by intimate partners. One key insight generated from this research is the importance of including men in gender training programs in order to achieve transformational changes in IPV outcomes.

In addition, leveraging local traditions to bring men and women together to discuss issues related to gender roles, household dynamics, and sexual health can be an effective way to shift norms and promote healthier relationships. However, further research is needed to understand the mechanisms through which gender transformative norms can lead to reductions in IPV.

Even more important, interventions like UBL have the potential to be adapted to a variety of settings. The program’s podcast version, for example, leverages low-cost technology to bring the same information and build the same skills as the in-person program to people who are not able to physically meet. Lessons like these can inform creative adaptations of evidence-based solutions to problems such as IPV in order to generate lasting impact during the COVID-19 pandemic and beyond. 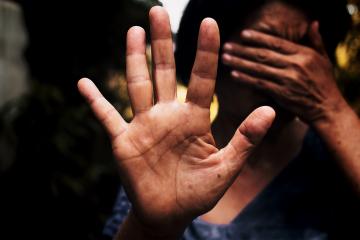 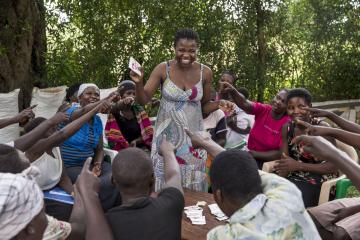