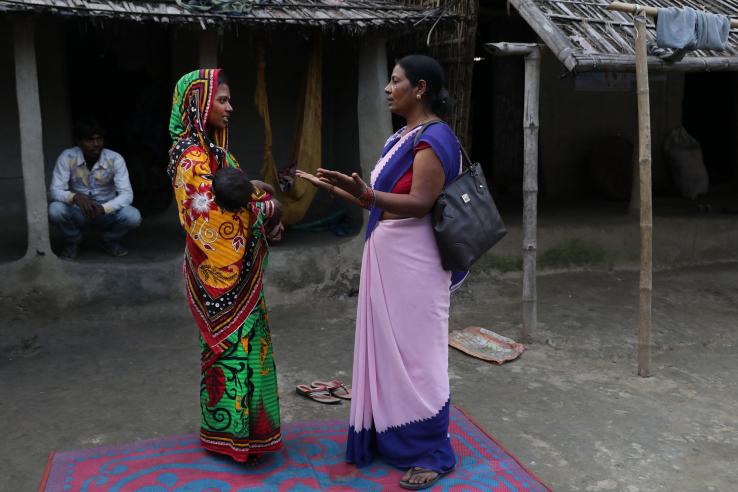 According to the World Health Organization, 1 in 3 women worldwide have experienced physical or sexual violence in their lifetimes. Low rates of reporting pose a barrier to addressing this form of violence, especially as it is commonly perpetrated by an intimate partner within the home. Recent global estimates suggest that fewer than 40 percent of women seek help after experiencing violence, and among those that do, fewer than 10 percent report such cases to the police. Individuals affected by this violence—victims and bystanders alike—may be reluctant to speak out to friends, family, or police.

In recent years, a growing number of randomized evaluations have been launched to help identify concrete measures to increase reporting and reduce the incidence of violence against women. This is just one potential response—other approaches intentionally target instead the behavior of perpetrators of this violence, while a growing strand of research is examining how cash transfers can be effective in reducing intra-household violence. We review here recent studies that have focused on two different approaches to increasing reporting, as part of a broader effort to reduce violence against women:

These studies are starting to build up evidence that it is indeed possible to change norms and behaviors around reporting violence against women (even when norms about the violence itself may be difficult to shift), and that increasing women’s access to the police—including through staffing stations with trained female officers—may also be an important part of the solution.

There are a number of potential reasons why women may choose not to report cases of violence. For instance, they might fear retaliation by their partner or have little faith the police will take action. Social norms may also play a role: across Africa and Asia, between 30 and 60 percent of women agree that a husband is justified in beating his wife under certain circumstances.

Trying to shift these norms could ultimately help reduce incidence in two ways: either by directly shaping the behavior of those who engage in such violence or by reducing the perceived costs of speaking out and reporting these crimes. Interventions that focus on the latter would ideally be matched by efforts to ensure that reporting leads to meaningful action by public authorities.

An earlier study from India provides promising evidence of how a shift in women’s political representation had a dramatic effect on reporting behaviors. Lakshmi Iyer (Notre Dame) and co-authors examine the impact of a 1993 constitutional amendment that called for a random third of village council positions to be reserved for women. They find that the reservation led to a 46 percent increase in the number of documented crimes against women.

They further show that this rise appears to have been primarily due to an increase in reporting of incidents to police rather than any increase in incidence—as there was no significant change in the level of crimes not targeted against women or in crimes against women such as murder that are unlikely to be affected by reporting biases. More encouragingly, the increase in women elected to these village council roles also led to heightened police responsiveness and increased arrests for crimes committed against women. (Learn more about insights from J-PAL studies on the wide-ranging effects of gender quotas in local government here.)

Witnesses of violence against women may withhold information due to fear of community censure or being branded as a gossip. Encouraging bystanders to report violence may require shifts in norms about what it means to report it.

J-PAL affiliate Donald Green (Columbia), and co-authors Jasper Cooper (UCSD) and Anna Wilke (Columbia), evaluated the effectiveness of using a mass media intervention in rural Uganda to encourage reporting of violence against women. They held a film festival in 112 villages and, in a randomly selected subset of those villages, they screened education-entertainment videos addressing crimes against women during the festival intermissions. The short vignettes depicted violence by a husband towards his wife and appealed to viewers to speak out about these crimes, despite norms against meddling in the private affairs of others.

Following the intervention, women in villages where the videos were screened were 18 percent less likely to believe that they would face social sanctions for reporting violence against women and 22 percent more likely to say they would make a report. The researchers also found a reduction in some measures of incidence: they estimate that the likelihood of women experiencing violence in treatment communities fell by five percentage points (from a baseline of 20 percent in control communities). However, the researchers found no effects on community members’ acceptance of violence against women. Building on these results, Donald Green, Dylan Groves (Columbia), Rachel Jones (Innovations for Poverty Action), and Constantine Manda (Yale) are conducting a similar evaluation in Tanzania to measure the impact of radio programming on both attitudes and behaviors.

Researchers in Peru have partnered with the government to ask whether a locally driven intervention could lead to shifts not only in reporting but also in attitudes towards violence. J-PAL affiliate Erica Field (Duke), and co-authors Ursula Aldana (Instituto de Estudios Peruanos) and Javier Romero (Duke), are partnering with the Ministry of Women and Vulnerable Populations to evaluate the effectiveness of an intensive training for rural village leaders designed to reduce acceptance of gender-based violence and provide practical methods for community members to identify and report these crimes.

The five-session training course for village leaders covers topics such as stereotypes surrounding gender roles, norms regarding violence, and strategies to identify and prevent violence against women. These leaders–both men and women–develop and execute an action plan that includes regular awareness-raising activities within the village, house-to-house visits, and additional trainings. The idea behind the program is to engage individuals with local influence to drive changes not only in reporting of cases, but also in behaviors and attitudes that perpetuate gender-based violence more generally, leading to a reduction in incidence.

Another way to encourage reporting of violence against women is to make it easier to approach the police. A recent evaluation by Jasper Cooper considered the impact of introducing uniformed auxiliary police officers in rural areas of Bougainville, Papua New Guinea, where previous police presence had been limited. Cooper finds that the introduction of a permanent police presence in the village leads to increased crime reporting by women, and that this is particularly true when the officer is female.

Adding female police officers without specialized training or strategic roles, however, may not be an effective way of addressing this issue. A recent lab-in-field experiment by Sabrina Karim (Cornell) and co-authors estimated the impacts of randomly varying the proportion of women officers in teams of the Liberian National Police. Teams with heavier concentrations of women exhibited greater cohesion but were no more sensitive to sexual and gender-based crimes than teams with fewer women.

In light of this, new research is examining a different question: can increasing the representation of female officers in dedicated public-facing roles, combined with special training, increase both the reporting of crimes against women and their effective prosecution?

A quasi-experimental study by Sofia Amaral (University of Munich) and co-authors presents suggestive evidence from the rapid expansion in “all-women” police stations in India from 2005-13. They find that the introduction of these units, staffed entirely by female officers trained in handling crimes committed against women, led to a 22 percent increase in reporting. There was no increase in non-gender-specific crimes, suggesting again that what changed was women’s willingness to report these crimes.

Taken together, the studies above provide some initial insights into promising approaches for addressing violence against women. Although influencing the core attitudes around gender-based violence may be challenging, rigorous evidence has shown that it is possible to shift both victims’ and community members’ behaviors towards reporting these crimes to police. Research currently underway, as well as new studies in this field, can provide valuable insight into the most effective ways to structure police response and on the potential approaches for changing attitudes towards violence against women, in the hopes of reducing its incidence.