How should policing powers be structured to maximize the state’s capacity to deliver legal protection to its citizens? Researchers are using a randomized evaluation in Papua New Guinea to study the impact of the Community Auxiliary Police (CAP), a program that devolves policing powers to carefully selected community members.

In some developing countries, the state is often unable to deliver the protections of the law to all its citizens. When the state’s reach is limited, the few interactions citizens have with police are often marked by corruption, absenteeism, or abuse, contributing to dissatisfaction and distrust. These citizens sometimes instead rely on informal security providers, such as chiefs, families, or mobs, who may not deliver justice fairly. Transferring the state’s policing power to carefully selected community members could help extend state capacity in such areas, but empowering local actors may create adverse power inequalities. How should policing powers be structured to maximize the state’s ability to deliver legal protection to its citizens?

During a resource conflict in the 1990s, young male combatants completely took over certain areas of the autonomous region of Bougainville, Papua New Guinea. These events undermined the power of the state police and chiefs to police remote villages. As a result, members of some communities lack access to policing of any type, either informal or state-provided. In areas that do have informal policing, norms about justice and sentencing can often diverge strongly from those contained in the state law and Human Rights charters. For example, mobs frequently kill those accused of sorcery, while perpetrators of sexual assault against women often simply compensate their victims’ families with material goods.

To deliver legal protection to citizens in remote areas in Bougainville, the Community Auxiliary Police (CAP) program transfers policing powers to individuals who are well-respected and accountable to their communities. The New Zealand Police helps recruit, train, and manage the CAP. There are presently 320 CAP officers located throughout Bougainville’s roughly 8,000 villages. While only around 2 percent of all central police officers are women, approximately 20 percent of CAP officers are women, due to a deliberate drive to recruit female officers. In a context where tradition typically prohibits men from gathering thorough evidence from female victims of assault, having female police officers may improve reporting of gender-related crimes and victims’ satisfaction with policing outcomes. 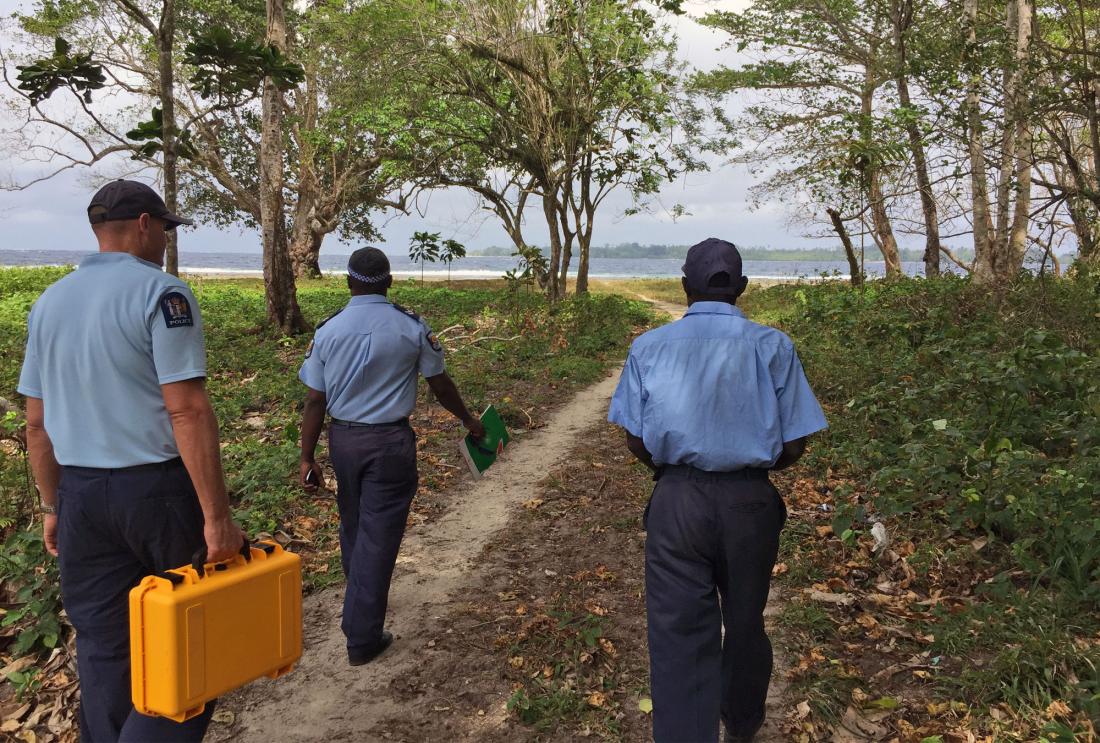 In partnership with the Bougainville and New Zealand Police, researchers are using a randomized evaluation to study the impact of the Community Auxiliary Police (CAP) program on deterring crime and increasing citizen trust in the state. In December 2015 and January 2016, researchers introduced a lottery system into the recruitment of 35 new CAP officers. In the recruitment process, the Council of Elders (COE), an elected local-level government representing the chiefs of around 40 villages, nominates candidates for CAP. The applicants then go through a screening procedure to determine eligibility, including passing literacy tests and interviews. Typically, COEs nominate around 20 CAP candidates and have around eight eligible candidates pass the screening, each from different villages. COEs are allotted a given share of new recruits, usually one or two officers. Within the eligible shortlist, the Bougainville Police Service randomly selected the actual recruits from each COE using a lottery. Selected recruits work in the villages they are from. Thus, the villages whose candidates were randomly selected for recruitment formed the treatment group, while the remaining villages whose candidates were not selected formed the comparison group. Overall, researchers will interview 2,000 individuals in 40 village clusters randomly assigned to either have or not have a CAP officer recruited in their village.

Treatment villages who received CAP will have a uniformed officer that works in their villages as full time police, conducting arrests, dispelling tension, investigating crimes, and mediating conflicts. CAP officers also receive monthly trainings from the New Zealand Police on human rights and dispute-resolution. Villages in the comparison group will maintain the status quo. Researchers will conduct two waves of surveys: six months after and one year after the CAP officers have been present in the treatment villages. Researchers will examine the impact of the program on the quality of local policing service, such as the reporting of crime, and changes in attitudes towards the state and other behaviors, such as domestic violence.