On paper, both secular and religious law guarantees women specific rights related to financial provisions and exiting a bad marriage in their marriage contract. However, in reality, most women are not involved in deciding the terms of this contract or not informed about the contract’s terms before signing it. In this way, marriage registrars, who are also government officials, can play a significant role in advising the family on terms which may benefit the woman during marriage and in case of divorce. Researchers are partnering with the Punjab Commission on the Status of Women to evaluate the impacts of a training program for registrars on their knowledge of and adherence to the law.

Women’s rights to make key life choices are intrinsically important to human wellbeing. These rights, such as decision-making about marriage, divorce, and property, also affect economic development.1 However, in some contexts laws may be more progressive on paper than in practice, particularly when public officials have discretion over how to interpret and implement laws. Thus, legal reforms may have no effect unless officials’ behaviors and practices change.

Across the Punjab province of Pakistan, over 600,000 marriages and 93,000 divorces were registered in 2016.2 This corresponds to a 10 percent decrease in the marriage rate and a 17 percent increase in the divorce rate from the previous year.3 Men filed the vast majority of divorces, with 77 percent by men compared to 23 percent by women.4 The denial of a woman’s right to divorce has been observed in families from a range of socio-economic backgrounds, including families of highly educated women. Despite legal reforms on the minimum age of marriage, child marriages also still occur.

Approximately 40,000 individuals are officially designated as marriage registrars in Punjab. These individuals may choose to follow their own judgment or respond to pressure from others when filling out marriage and divorce contracts, rather than strictly following the law. They are not full-time government employees, but often are religious leaders or community members. There is no minimum educational requirement nor required training for registrars. Data shows that registrars have limited knowledge of the law, with an average score of 47 percent on researchers’ baseline assessments during a pilot. 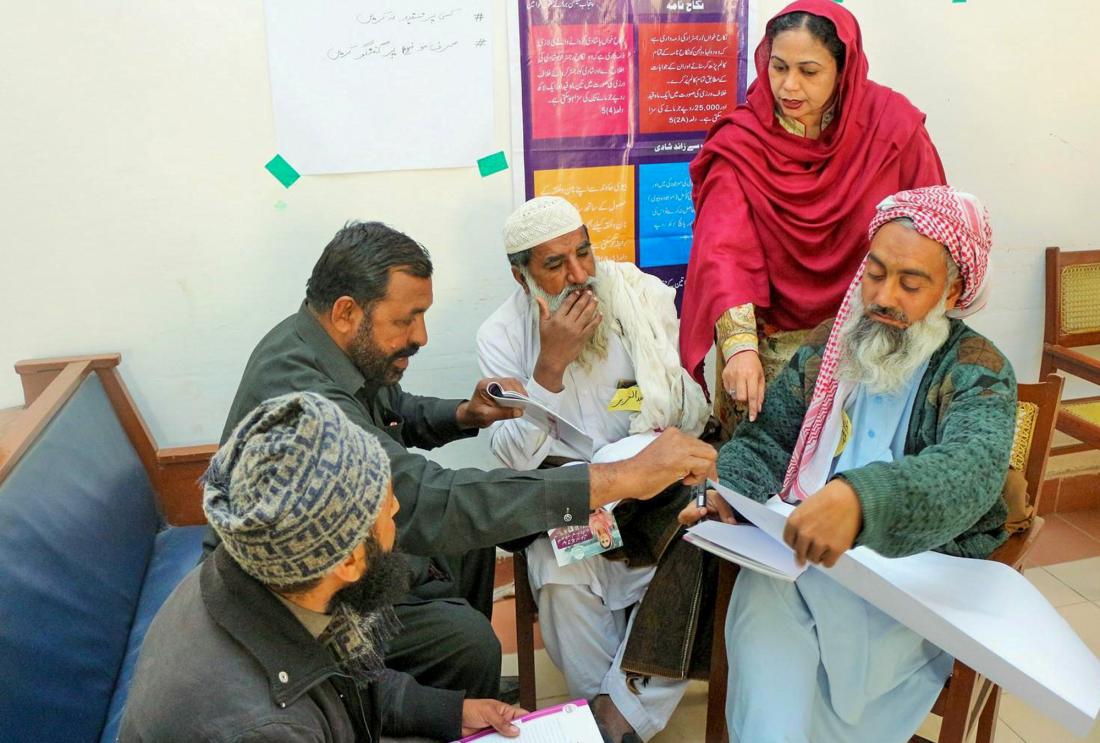 In close collaboration with the Punjab Commission on the Status of Women (PCSW), researchers are evaluating the impact of training programs for marriage registrars on their knowledge of and adherence to the law. PCSW is partnering with the Punjab Local Government Department to implement training sessions through approximately 2,000 Union Council offices, which administer registrars and house marriage records. The Local Government Department will ensure that trainings are mandatory for registrars to retain marriage licenses, and will revoke licenses if registrars do not comply. Trainings were implemented across the province in 2017 and 2018.

Due to budget constraints, PCSW has the funds to train approximately 75 percent of Union Council offices, so it is randomly selecting a subset of offices to participate in training. Researchers will survey registrars before and after training to assess their knowledge of the law, personal attitudes and behavior on gender norms and marriage rights, and perception of community norms. Researchers will also collect data on participants’ socio-economic status, such as age, level of education, and religious role in the community, in order to assess whether the training has different impacts on registrars with different characteristics.

Additionally, researchers will utilize the Union Council’s administrative data to analyze marriage contracts conducted by the registrar before and after the training. These contracts provide evidence of registrars inappropriately crossing out sections of the contract, responses to key options like the amount of dowry to be transferred to the wife after divorce, and other changes to the forms.

If researchers find significant preliminary results, they plan to conduct additional household surveys to evaluate the impacts of the training on household dynamics and economic outcomes. The results of this study will help PCSW plan future requirements and trainings for registrars across Punjab province and, potentially, nationwide.