The Role of Students’ Mindset in Improving Educational Outcomes in France

Psychosocial skills, such as motivation, perseverance and self-discipline, are increasingly considered to be at least as important as cognitive skills for educational attainment and labor market outcomes. Researchers evaluated the impact of a series of class discussions in middle school that emphasized the importance of these skills on student behavior and test scores. The program improved participating students’ academic achievement, particularly among girls, well-behaved students, and non-recipients of financial aid. The researchers find evidence that this impact is driven by a change in students’ mindsets, improved school behavior, and higher professional aspirations.

Students' psychosocial skills, such as motivation, perseverance and self-discipline, are increasingly considered to be key determinants for educational attainment and labor market outcomes. Fostering such skills can be particularly beneficial for children from disadvantaged backgrounds,1 hence investing in the development of psychosocial skills at school could help close the attainment gap between schools. However, little is known about the malleability of students’ mindset, and the impact of policies that aim to improve students’ psychosocial skills on educational achievement.

Since 1981 the French government has been providing additional resources to schools in disadvantaged neighborhoods, known as Zones d’Éducation Prioritaire, to reduce class size and provide extra hours of teaching.2 However, a survey revealed that students from lower socio-economic backgrounds, with less-educated parents or of immigrant descent, still tend to have lower academic performance.3 To close this gap, the French government has encouraged non-profits such as Energie Jeunes, the partner in this evaluation, to implement a range of programs in schools in disadvantaged neighborhoods. 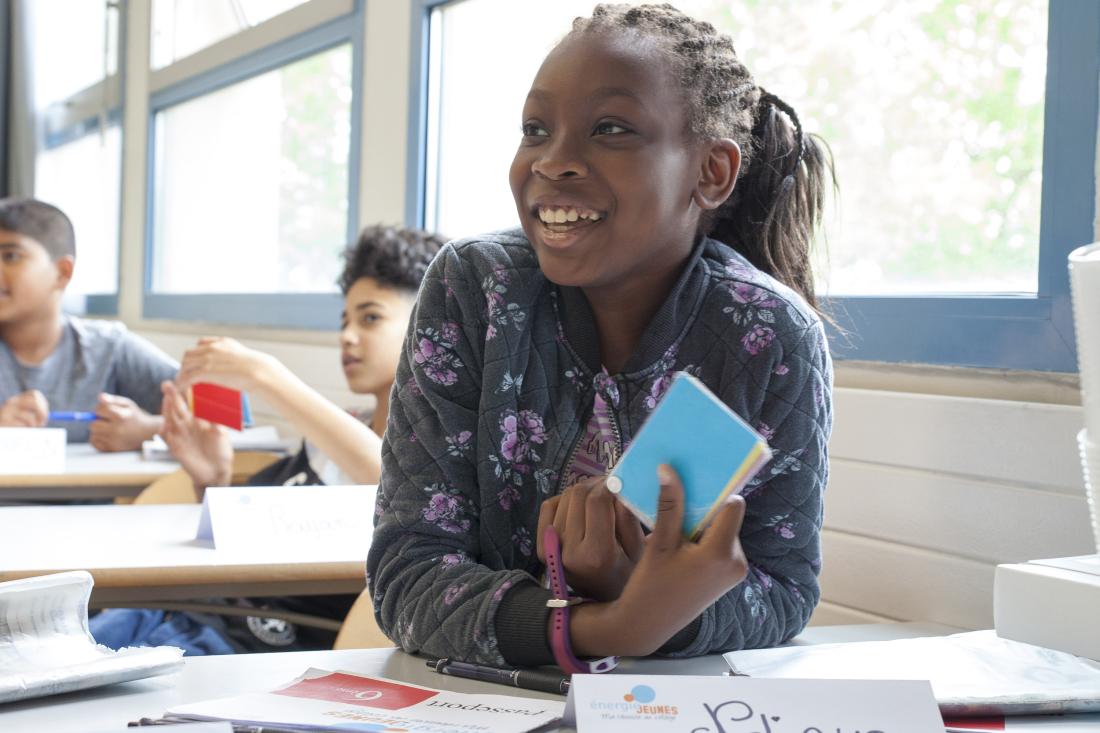 Researchers partnered with Energie Jeunes to measure the impact of the program Exploiter tout son potentiel (“Reaching your full potential”) on student behavior and academic achievement (GPA and national exam scores). The program consists of three 55-minute sessions per year over the four years of middle school. These sessions, informed by the psychological literature, were designed to encourage a growth mindset of intelligence among students, emphasizing the importance of perseverance in shaping one’s intelligence. The program also included a yearly goal-setting exercise designed to foster students’ own sense of agency by committing to reaching a specific objective during the school year (e.g., improved grade in a given subject).

97 disadvantaged public middle schools volunteered to participate in the program. The program was offered to sixth-grade students at the beginning of the 2014/2015 and 2015/2016 school years. In each school, one cohort was randomly assigned to receive the Energie Jeunes program for four years, while the other cohort did not receive the program and served as the comparison group.

To measure the impact of the intervention, researchers used school administrative data to capture students’ academic performance and reported behavior (e.g., lateness, absenteeism, disciplinary sanctions), while teacher surveys were conducted to measure students’ character across various traits (intellectual, social, achievement). Additionally, researchers measured students’ perceived return to effort and self-reported diligence through a tailored survey. Finally, researchers used the results of the national middle school exam to measure the impact of the program on an objective measure of academic achievement.

The program improved participating students’ academic achievement, particularly among girls, well-behaved students, and non-recipients of financial aid. The researchers find evidence that this impact is driven by a change in students’ mindsets, improved attitudes, and higher professional aspirations.

Increased grade point average (GPA): Students who participated in the Energie Jeunes program had a 0.07 standard deviation (SD) increase in GPA after four years. This corresponds to a 0.2-point increase in average grades (out of 20 points) or 20 percent of the difference between children from lower-income households and their counterparts. The program had an immediate impact in Grade 6 and larger effects on the academic performances for girls (0.08 SD by Grade 9), non-recipients of financial aid (0.8 SD by Grade 9), and well-behaved students (0.10 SD by Grade 9). However, these positive effects on test scores did not materialize until Grade 9 for boys and aid recipients, and the intervention had no impact on the school grades of poorly-behaved students (based on absenteeism, lateness, and school discipline).

The program’s impact on students’ GPA may be interpreted as a mere consequence of teacher grading behavior whereby teachers would overestimate students’ achievement either because they know they are being observed or because they reward better behaviors in class. Researchers used the results from the national middle school exam to show that this is not the case. The program also impacted the performance of students at the national test (0.028 SD) with results essentially concentrated on humanities: French (0.045 SD), History and geography (0.028 SD) oral examination (0.034 SD).  These national exam results show that the program had actual impacts on students’ scholastic competencies, either through improved knowledge or skills or because treated students exerted more effort while taking the test.

The heterogeneity in the timing and magnitude of the program’s impact on GPA scores is likely attributable to variations in the program’s take-up, as girls, non-recipients of financial aid, and well-behaved students were more likely to participate than their respective counterparts. This may be because boys, aid recipients, low-achievers, and poorly-behaved students were more likely to be absent and miss parts of the intervention.

Researchers find evidence that the students’ improved academic performances were driven by a change in students’ mindsets, improved character and behavior, and higher professional aspirations.

Change in students’ mindsets: The program was effective in developing a growth mindset among participating students and prompted them to reassess their chances for academic success. The intervention led to a 0.04 SD increase in students’ perceived return to effort. In line with the differential impacts on GPA, girls, non-recipients of aid, and well-behaved students were more responsive to the intervention in terms of adjusting their perceived return to effort.

Improved student character and behavior: Students’ character (as evaluated by their teachers) improved throughout middle school as a result of the intervention, with an overall increase of 0.039 SD. While girls gained more in intellectual and achievement character (e.g., curiosity, grit, optimism), boys improved more in social character (social intelligence, interpersonal self-control).

The intervention also had a positive impact on students’ behavior, although this effect did not materialize until the end of the four-year program. The timing of the impact suggests that behavior may be a key driver for academic achievement among students for whom an improvement did not materialize until the last year of the intervention. Behavioral improvements were particularly pronounced among low-achievers and poorly-behaved students prior to the intervention; for these two groups, the program reduced the behavior gap in comparison to their counterparts by about 20%.

Higher professional aspirations: The program had a positive impact on students’ professional aspirations. The share of students aspiring to a low-skilled job decreased by two percentage points, while the share of students aspiring to a medium-skilled job increased by the same magnitude as a result of the intervention. The impact of the program on students’ aspirations was concentrated among girls, aid recipients, low-achievers and well-behaved students.

Taken together, these results suggest that developing a growth mindset intelligence among students can be an effective approach to improve their educational outcomes and reduce between-school inequalities. Moreover, the intervention proved to be a cost-effective alternative to programs with comparable effect sizes, costing only €65 per student. However, given the higher responsiveness of well-behaved students to the intervention, mindset interventions may widen within-school inequalities in academic achievement, at the same time that they contribute to reducing the performance gap between schools.