In low- and middle-income countries, even well-designed social policies can face implementation challenges when it comes to the actual delivery of government services like teaching or disbursing benefits. Researchers conducted a large-scale randomized evaluation to test the impact of a cell phone-based monitoring system on the delivery of government payments for 5.7 million farmers in Telangana, India. Phone-based monitoring significantly improved the likelihood of farmers ever receiving their payments as well as receiving them on time, indicating improved performance by on-the-ground service providers. Researchers found this program was highly cost-effective—costing 3.6 cents for each additional dollar delivered—suggesting that phone-based monitoring can be a cheap, simple, and flexible tool for improving last-mile service delivery at a large scale.

In low- and middle-income countries, even well-designed social policies can face implementation challenges when it comes to the actual delivery of government services like teaching1 or disbursing benefits.2 One reason implementation can be challenging is that it can be difficult for governments to monitor the performance of the public workers in charge of delivering services to beneficiaries. Front-line workers are typically located across thousands of (often remote) communities, and government workers at all levels may misreport performance.

One possible solution is to ask beneficiaries themselves if they are receiving what the program promises, and to use that information to monitor the performance of the public workers responsible for the delivery of benefits. The widespread adoption of mobile phones—62 percent of people in low-income countries had a mobile subscription in 2017, up from one percent in 20023—offers a new avenue to contact program beneficiaries at low cost. There is little evidence, however, on whether phone-based monitoring, also known as high-frequency monitoring, can actually improve last-mile delivery of social programs.

In May 2018, the government of the Indian state of Telangana introduced the Rythu Bandhu (“Friend of a Farmer”) program, which disbursed USD$900 million (around seven percent of the state’s annual budget) to farmers in each of the two cropping seasons that year. These transfers were delivered as checks and were meant to finance farmers’ investments in seeds and fertilizer and reduce their debt ahead of the planting season—making timely delivery of the transfers important.

The Telangana Department of Agriculture oversaw the distribution of checks in all 548 mandals (sub-districts) in Telangana. Local Mandal Agricultural Officers (MAOs) convened one meeting in each village to distribute checks to landowners. The program aimed to reach every farmer registered as a landholder in the government’s digital land registry—a total of 5.7 million farmers—with a payment of Rs. 4000 (US$55) per acre.

Meanwhile, as in most low- and middle-income countries, mobile phone penetration rates in this setting have grown in recent years. Among the 5.7 million farmers included in the Government of Telangana’s land registry, 61 percent listed a contact cell phone number. 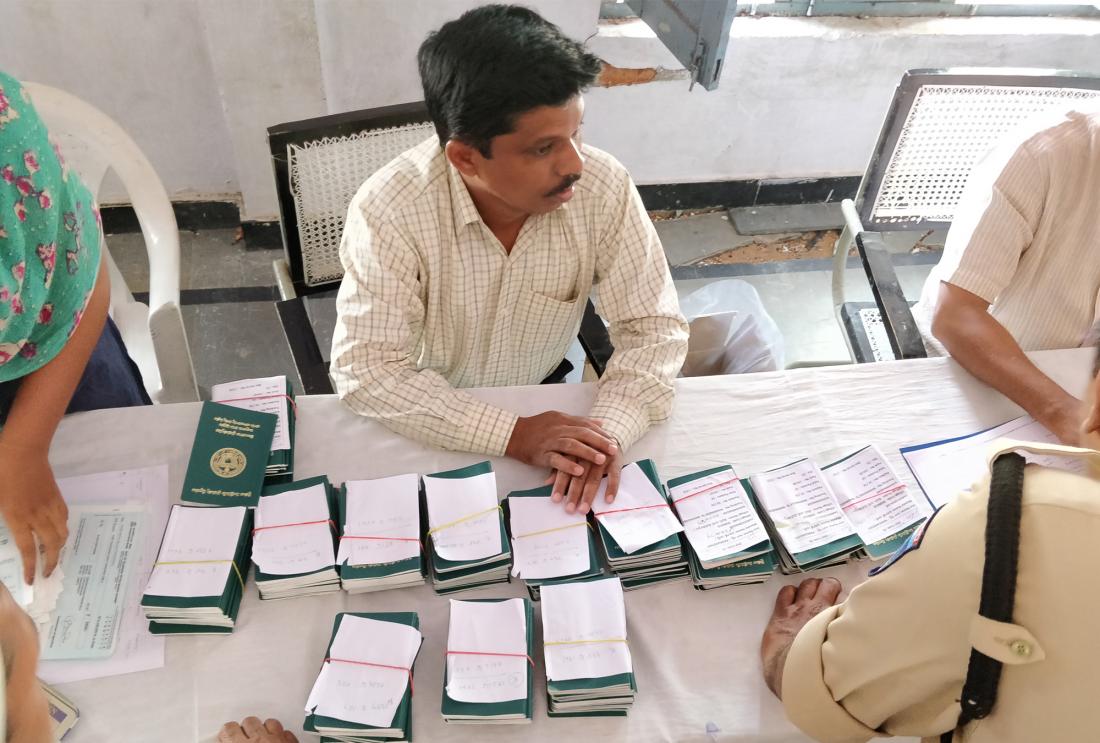 In partnership with the Government of Telangana, researchers conducted a large-scale randomized evaluation to test the impact of a cell phone-based monitoring system on the delivery of government transfers to farmers. They randomly assigned 122 of the state’s 498 MAOs—responsible for 1.3 million farmers—to learn about the cell phone-based monitoring system. In a webinar and a follow-up letter, the Department of Agriculture informed these MAOs that researchers would call at least 100 of the farmers for whose payments they were responsible and ask questions about the implementation of the program. The Department of Agriculture also informed these MAOs that they and their supervisors would receive performance reports based on information from these calls.

The government contracted a call center to reach farmers and obtain information about their payments. Researchers complemented information from calls with bank and check distribution records to determine whether and when farmers received checks. This administrative data allowed the researchers to evaluate whether calling farmers and sharing call information with MAOs led to verifiable changes in MAO performance. Researchers also complemented this data with a short phone survey of MAOs themselves.

In part because call center services are cheap and readily available, the intervention was quick to set up and implement. Researchers first met with the government of Telangana in early April 2018, and shared performance reports with MAOs in July.

The study design raised two main ethical concerns. First, one possible response to the intervention was the diversion of bureaucratic attention from individuals who do not have phones towards those who do and thus could be surveyed. Households without phones are typically poorer, and this intervention had the potential to harm them by making them less likely to receive their checks. A second concern was that the intervention may divert bureaucratic effort away from implementing other public programs. Researchers collected data on both concerns, but did not find evidence for either. However, policymakers considering the use of phone-based monitoring should carefully consider the possibility of these issues occurring in their contexts.

Likelihood of ever receiving payments: Farmers in the cell phone-based monitoring group were 1.3 percentage points more likely to cash a check from the program (a 1.6 percent increase over a likelihood of 83 percent in the comparison group). Expressed differently, the intervention led to a 7.8 percent reduction (1.3 percentage points on a base of 17 percent) in the number of beneficiaries who did not receive their benefits. This effect was largest for farmers with the smallest landholdings: farmers in the bottom quartile of landholdings saw an increase of 2.2 percentage points (a 3.3 percent increase from 68 percent in the comparison group) in the likelihood of cashing a Rythu Bandhu check. Farmers without cell phones saw equal improvements in overall check cashing rates, indicating that MAOs did not seem to focus their improved efforts only on farmers who had phones.

On-time payments: The cell phone-based monitoring scheme increased the likelihood of farmers receiving their payments in time to buy seeds and fertilizers for the planting season by 2.4 percentage points (a 3.5 percent increase on a base of 69 percent in the comparison group). Farmers without phones saw equal improvements in on-time check cashing relative to farmers with phones. Considering the entire group of 1.3 million farmers covered by MAOs that received the intervention, this resulted in nearly 32,000 additional farmers cashing their checks before the monsoons that mark the start of the planting season.

Quality of data obtained from phone calls. In 88.6 percent of cases, farmers’ self-reports on whether they had cashed checks were consistent with bank records. This suggests phone calls can be a reliable tool to monitor service delivery in settings where administrative data is not available. However, phone data was less accurate in ranking MAOs against their peers. This suggests that phone-based monitoring can be used to push workers for more effort, but should not be used to make decisions about promotions or dismissals.

Timing of performance reports: The performance reports were only published after the vast majority of the MAOs’ work on the payment program was completed (95 percent), meaning that impacts of the cell phone-based monitoring were driven by MAOs’ knowledge that they were being monitored, rather than changes to their performance based on feedback. This suggests any impacts might be even greater if MAOs also improve their future performance in response to feedback.

These results suggest that phone-based monitoring can be implemented by governments at a large scale and deliver significant improvements in service delivery across millions of beneficiaries—including in dispersed and remote communities—in a cost-effective manner. Compared to more specialized tools for monitoring public service delivery, such as smart-phone applications or time clocks, phone call-based monitoring can be inexpensive, quick to deploy, and easy to adapt to changing circumstances.

Following this evaluation, the phone-based monitoring system has been used in two other Indian states. First, researchers worked with the Government of Delhi on a high-frequency monitoring system to track the use of mohalla (primary care) clinics in Delhi, and subsequently to monitor COVID-19 relief efforts during the first nationwide lockdown in April-June 2020. The system generated a real-time dashboard on food security, economic well-being, and self-reported symptoms that was used to inform policy. The research team is also working with the Government of Odisha on implementing phone-based monitoring in the context of the Public Distribution System. The evaluation, which is designed to feed back into policy decisions, is expected to roll out later in 2022.