Last updated:
Evidence from 11 low- and middle-income countries shows that encouraging caregivers to play and interact with children aged 0–3 in a stimulating way improves children’s cognitive development. These programs can increase the time and resources parents invest in their children’s development. However, open questions remain on how to effectively deliver these programs at scale. 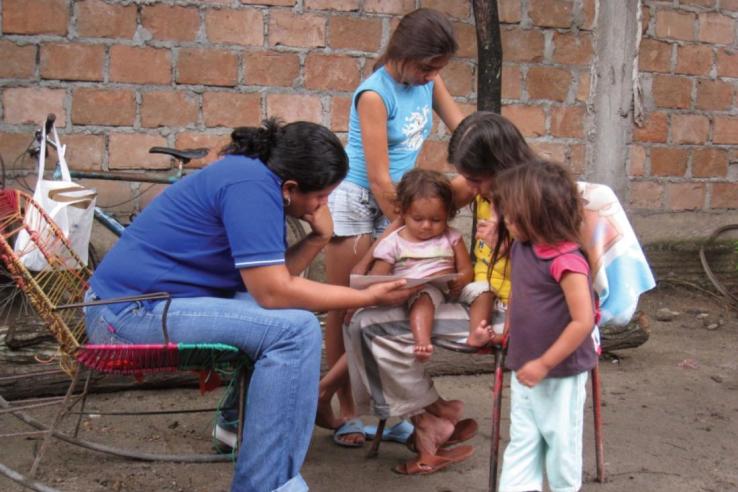 Available estimates suggest that 43 percent of children under 5 in low- and middle-income countries are at risk of not reaching their developmental potential [1].  Due to high levels of brain plasticity and neurogenesis, early childhood, from 0–5 years of age, is an extremely important period for long-term cognitive and psychosocial development [1][2][3].

Simple activities such as playing, reading, and singing with children are core components of early childhood stimulation (ECS). ECS can improve young children’s ability to think, communicate, and connect with others [1][4]. However, many children are not getting enough stimulation during this critical time [1]. Some of the most common ECS programs focus on encouraging caregivers to play with children: volunteers or community health workers visit caregivers at their homes or deliver group sessions in health clinics, homes, or other community spaces.

A review of 17 randomized evaluations from 11 low- and middle-income countries 1 finds that programs that teach and encourage caregivers to implement ECS with children aged 0–3 can improve the quality and quantity of play in children’s home environments and can improve children’s cognitive development [5][6][7][8][9][10][11][12][13][14][15][16][17][18][19][20][21][22][23][24][25][26][27][28][29]. Whether the effects persist beyond the intervention period varies, however. In Jamaica, a small-scale study was able to follow participants for 20 years: it found that increased stimulation at home during early years led to long-term gains in cognition, academic achievement, employment, mental health, and adult earnings [5][6]. In Colombia, impacts of a large-scale program on child development faded two years after the program ended [7]. ECS programs may have the greatest impacts for the most disadvantaged children, such as those who are stunted or underweight or have lower cognitive outcomes before an intervention [8][9][10][11][12]. While results to date are overall promising, there are many open questions on how to deliver these programs at scale to sustain cognitive development, including how to best incentivize program facilitators and monitor programs to maintain quality implementation.

Programs promoting psychosocial stimulation between caregivers and children, delivered by trained individuals in one-on-one or group settings, improved developmental outcomes for children. In each program, staff encouraged mothers to play and interact with their children in ways that stimulate cognitive development and often promoted responsive parenting, using various implementation models (see Table 1). All of the 16 studies that measured developmental outcomes found that these programs significantly improved child development in the short-term [8][9][10][11][12][13][14][15][16][17][18][19][20][21][22][23][24]. In one Jamaica study, stunted children who received the 24-month program had large improvements in cognitive, language, and motor development, including a 0.88 standard deviation increase in cognitive development [8]. In Bangladesh, child cognition improved by 1.3 standard deviations, in addition to large gains in language and motor skills [9]. Additional programs, including those in Antigua [13], Bangladesh [14][15][16][17][18], Colombia [11][19] China [10], Ethiopia [20], India [21], Jamaica [13][22][23], Mexico [12], St. Lucia [13], and Uganda [24], had smaller impacts on developmental outcomes (0.15–0.55 standard deviations). The smaller impacts seen in most studies may have been due to implementation challenges [7], focusing on a less disadvantaged population pre-intervention in terms of nutritional status or poverty level [7][11] or less specific information in group meetings with children of broader age ranges [12], among others.

Programs to promote ECS can have the largest gains for children who are most disadvantaged. Children with malnutrition and/or low socioeconomic status at the start of an intervention may benefit most from increased stimulation at home. In Jamaica and Bangladesh, where short-term improvements in development were largest, programs were in low-income, disadvantaged neighborhoods and focused on stunted and underweight children, respectively [8][9]. In the group model in Colombia, children’s cognitive development in the poorest half of households increased by 0.22 standard deviations, while children in households with above average wealth in the study area saw no significant improvement [11]. In both China and Mexico, short-term impacts were greatest for children who had lower development at the start of the intervention [10][11]. Results in Mexico were also driven by improvements in indigenous communities, where attendance at formal or informal preschools was lower at follow-up, and thus children were less likely to be receiving cognitive stimulation outside the home [12]. These results suggest that programs to encourage ECS at home may have larger impacts in contexts where children may already have developmental disadvantages.

Only one study to date has studied long-term impacts. It found that impacts persist into adulthood, leading to improved outcomes in school, employment, and earnings. In Jamaica, children in the small-scale ECS program continued to outperform children from the comparison group on IQ tests at 7, 11, 17, and 22 years of age [5][6][25][26][27]. In the most recent follow-up at age 22, the average IQ was 0.6 standard deviations higher than the comparison group and individuals had attained, on average, 0.6 more years of schooling [5][6]. Not only did children stay in school longer, but they also performed better: young adults who received ECS scored 25 and 27 percent higher than the non-stimulated group on standardized math and reading tests, respectively [5]. As they entered into full-time jobs, they earned 25 percent more than those in the comparison group [6]. ECS had positive socio-emotional impacts as well: adults who received the ECS program reported less depression and social inhibition and engaged in less violent behavior, but reported similar anxiety levels as those in the comparison group [5].

One large-scale study in Colombia has looked at the medium run [7]. Initial impacts on child development at the end of the program were smaller than in Jamaica, and two years after the program ended, impacts on child development had faded. Faded impacts may have been due to implementation difficulties, focusing on a less disadvantaged population, shorter program duration relative to the Jamaica study, or subsequent school engagement.

Programs promoting ECS changed the way parents interacted with their young children at home and improved children’s home environments. Eight studies found that parents who received these programs invested more time and resources in stimulating play activities for their children [6][9][10][11][21][22][24][28]. In Jamaica, home visits led to a 16 percent higher score on a “home inventory index” than the comparison group, based on observations of parents’ interactions with their children and specific aspects of the home environment [6]. Home visits in Colombia led families to invest in 21 percent more play materials, such as toys and books, relative to the comparison group [28]. Caregivers additionally spent 32 percent more time on educational activities with children and engaged in a greater diversity of activities such as telling stories, going for a walk, and spending time naming things. Additional programs in Bangladesh [9], China [10], Colombia [11], India [21], Jamaica [22], and Uganda [24] also improved child stimulation at home. One study in South Africa found that mothers interacted with their children in a more sensitive and responsive way [29]. One study in Antigua, Jamaica, and St. Lucia found no impact on parental behavior [13]. However, this program showed short videos in health clinic waiting rooms and had shorter discussion, modeling, and practice of stimulating play.

Together, this evidence suggests that changes in children’s home environments contributed to improved developmental outcomes, rather than having developmental improvements driven simply by direct stimulation from practice play sessions with parents led by program facilitators.

ECS programs can increase parental knowledge and understanding of child development. In seven studies from Antigua [13], Bangladesh [9][14][16], China [10], Jamaica [13][22], St. Lucia [13], and Uganda [24], programs significantly increased parental knowledge of child development. For example, parenting programs increased parents’ knowledge of child rearing and the importance of play by 0.4 standard deviations in three Caribbean countries [13] and 1.7 standard deviations in Bangladesh [9]. Two studies in Colombia and India found that the parenting intervention had no impact on maternal knowledge [11][21]. Eight studies either did not measure or report impacts on parent knowledge [8][12][15][17][18][19][20][29]. This evidence suggests that in most cases programs provided new information rather than solely reminding parents of the importance of ECS. These programs also emphasized practicing play activities to support the application of new knowledge.

Though ECS parenting programs hold tremendous potential, motivating consistent program delivery has proven challenging at scale. Three large-scale studies highlight that achieving and sustaining impact at scale requires persistent caregiver engagement as well as strong monitoring systems [7][11][12]. In two group session models in Mexico and Colombia, researchers believed program attendance was a key factor influencing impacts of the ECS programs [7][12]. Understanding the motivations and barriers for participation is thus an important consideration for the potential success of a program at scale.

In a home-visiting program in Colombia where impacts faded two years after the intervention ended, staff turnover and reduced support for program staff2 highlighted challenges of implementation at scale [7]. It is also possible only large impacts are sustained post-intervention or that effects could potentially become apparent later on, as the benefits may accrue over time [7]. Continuing to follow children involved in ECS programs is an important area of future research.

There are many open questions on how to best design interventions for cost-effective, sustainable shifts in parenting behavior and impact at scale. Leveraging existing government program infrastructure may be needed to scale up ECS programs, as was done in Antigua [13], Bangladesh [9], China [10], Colombia [11][19], Jamaica [13], Mexico [12], and St. Lucia [13]. The results so far also highlight important tradeoffs across delivery models. Home-based delivery could be more accessible than group meetings, which are often delivered in a community center or health clinic [9][11]. However, home-based delivery is also expensive and could be more difficult to scale [19][23]. Group models could make mothers feel more comfortable or build more social support but should also consider how to motivate reliable attendance from participants [9][11][14]. Given tradeoffs in accessibility, group delivery may be best suited for contexts in which attendance at health centers is already high.

More cost data is also vital to inform scaling decisions. In the programs reviewed here, cost information is available from five programs in Colombia [11][19], Jamaica [23], and India [21] with different implementation models and costs ranging between US$134.40–$500 per child per year. Open questions remain on program duration/intensity, group versus individual meetings, the role of technology, at what age the intervention should begin, and how to incentivize and maintain high-quality implementation at a large scale.

Policymakers interested in improving early childhood development should consider programs that support parents and caregivers to invest more in stimulating play. These programs may be best targeted in areas where children are most disadvantaged, such as locations where there is a lack of other early childhood programs or where there are high rates of stunting or malnutrition. There may also be scope to incorporate these programs into existing social program infrastructure to potentially make implementation more feasible. Given the many questions on maintaining program quality at scale and improving cost efficiency, more research is needed on how to best structure these programs to achieve long-term improvements in cognitive skills.

Shonkoff, Jack P., Deborah A. Phillips, and National Research Council. "Neighborhood and community." In From neurons to neighborhoods: The science of early childhood development. National Academies Press (US), 2000. Research Paper

Nores, Milagros, and W. Steven Barnett. "Benefits of early childhood interventions across the world: (Under) Investing in the very young." Economics of education review 29, no. 2 (2010): 271-282. Research Paper

Aboud, Frances E., and Sadika Akhter. "A cluster-randomized evaluation of a responsive stimulation and feeding intervention in Bangladesh." Pediatrics 127, no. 5 (2011): e1191-e1197. Research Paper

Walker, Susan, Sally Grantham-McGregor, Christine Powell, and Susan Chang. 2000. "Effects of Growth Restriction in Early Childhood on Growth, IQ, and Cognition at Age 11 to 12 Years and the Benefits of Nutritional Supplementation and Psychosocial Stimulation." The Journal of Pediatrics 137 (1): 36–41. Research Paper