Early childhood is an important time for both physical and neurological growth and development, but many children fail to reach their development potential. Researchers introduced an early childhood development program in Colombia to test the effects of psychosocial stimulation and micronutrient supplementation on cognitive, behavioral, and physical growth and development. Psychosocial stimulation initially showed positive effects on cognitive growth, although the micronutrient supplementation had no effect. However, a follow-up study showed that the results on cognitive growth disappeared two years later.

Early childhood is a critical time for cognitive, social, and physical development. For children under the age of five, good nutrition and psychosocial stimulation—physical and emotional engagement—may be especially important for physical and neurological growth. Unfortunately, many children under five fail to reach their developmental potential, due to poverty and the often associated poor nutrition and lack of psychosocial stimulation. Previous research has shown that nutritional supplements early in life can increase a child’s income as an adult1 and that encouraging parents to play with their children more can promote greater emotional and intellectual development.2 Yet there is little evidence on how to successfully scale up early childhood development programs while maintaining impact and cost-effectiveness. To address this gap, researchers used the existing administrative capacity and community networks of a national cash transfer program in Colombia to evaluate the impact of a program that trained low-income mothers to provide their young children with psychosocial stimulation, micronutrients, or both.

In Colombia, as in many other countries, children from low-income households often accumulate delays in cognition and language, which can be detected as early as twelve months of age. A 2014 study found that, by age three, the cognitive and language differences between children from middle- and low-income households in Colombia were as large as one standard deviation of a standardized score. In addition, 31 percent of children in the country’s lowest socioeconomic category were anemic, an indicator of malnutrition, in 2010. At baseline, in the comparison group in this study, 46 percent of children were anemic and 16 percent were stunted.

Participating mothers were about 27 years old on average and had slightly more than a primary school education. 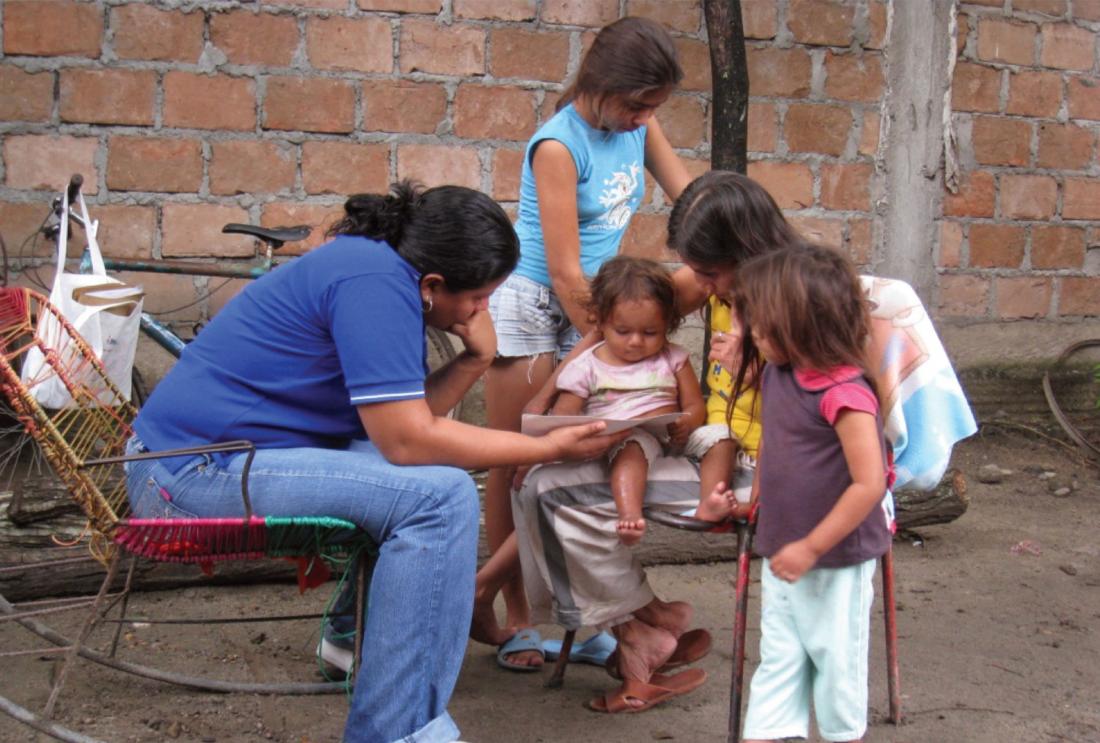 Researchers conducted a randomized evaluation to measure the impact of two early childhood development interventions on cognition and physical health, implemented through an existing national welfare program that could facilitate a cost-effective scale-up of these interventions. They randomly assigned 96 Familias en Acción municipalities near Bogotá to one of four groups: a psychosocial stimulation program, a micronutrient supplement program, both programs, or the comparison group. In each municipality, three mother leaders were randomly selected to administer the programs through home visits. Within each mother leader’s constituency (about 50 households), researchers randomly selected five families with children aged 12–24 months to participate in the study, for a total of 1,419 children.

The interventions began in 2010 and lasted 18 months. In municipalities assigned to the stimulation program, home visitors visited mothers every week and demonstrated appropriate play and learning activities for their children using low-cost or homemade toys, picture books, and form boards. In micronutrient municipalities, mother leaders distributed micronutrient supplements to households every two weeks and monitored their use. Municipalities in the third treatment group received both interventions. Home visitors were trained for several weeks by experienced social workers, who also provided home visitors with ongoing support and monitored their performance. 81 percent of scheduled home visits were completed, and 73 percent of scheduled micronutrient supplements were recorded as having been distributed.

Researchers used the Bayley-III scale of infant and toddler development to measure cognitive development. The scale has indicators on cognition, receptive language,3  expressive language,4 and motor skills.5 Researchers also surveyed the mother or head of household to gather socioeconomic data, such as age, education level, and employment status of all household members. measured children’s weight, height, and hemoglobin levels.

The stimulation program had positive impacts on children’s cognitive development immediately after the intervention, but these results were not sustained. The micronutrient program did not have child development impacts.

The stimulation program increased children’s cognitive development outcomes in the short term. Results collected immediately after the intervention demonstrated that encouraging mothers to interact and play more with their children improved children’s cognitive development by 0.26 standard deviations and receptive language by 0.22 standard deviations, relative to children in the comparison communities.

To understand what drove these initial improvements, researchers used the data from the randomized evaluation to model how different factors affected the development of the children in the study. This analysis demonstrated that the improvements in cognitive development were driven by increased parental investment, encouraged by the home visits. Researchers projected that relative to the comparison group, parents in households that received the stimulation program increased play materials and time spent with their children by 20.4 and 33.3 percent, respectively. Results demonstrated that material investments were the primary driver of children’s improvement in cognitive skills, and time investments were important in improving socio-emotional skills.

However, these cognitive improvements were not sustained over time. Researchers found no statistically significant improvement in any cognitive and behavioral measures at the two year follow-up: children assigned to the program had no better development outcomes compared with children in the comparison group. These findings ran contrary to results from other studies, such as those in Jamaica6  and Pakistan,7 which found positive medium or long term impacts of similar programs on child development.

The researchers provided several possible explanations for the lack of sustained cognitive impacts. First of all, the short-term improvements captured immediately following the intervention may have been too small to be sustained into the medium term. The evaluation was also conducted over a shorter timeframe and with a slightly wealthier population than the other studies. Furthermore, changes in parenting practices and the home environment were not sustained after the evaluation period. Additionally, the researchers suggested that effects could potentially become apparent later on, as the benefits may accrue over time and become apparent in a later period.

Inadequate resources led to poor program implementation. Researchers modelled this program off a similar one from Jamaica, which showed significant effects on children’s cognitive and receptive language skills. However, they were unable to pilot test the program in Colombia first to test and resolve implementation issues and instead immediately launched a large-scale program. Ultimately, staff received limited support due to resource and capacity constraints. Supervisors were supposed to meet with home visitors every six weeks, which was already less than the weekly visits in the Jamaica program. In reality, they only met every nine weeks. The supervisors themselves also had little support after an initial six-week training course.

Micronutrient supplements had no impact on children’s outcomes in either time frame. Researchers hypothesized that feeding practices, such as introducing semi-solid foods instead of breastfeeding, could have been a factor. In addition, mothers’ iron levels during pregnancy could have impacted how much iron the babies had at birth. The researchers found that mothers who had taken iron supplements for at least four months of pregnancy had higher rates of blood iron than those who did not. This iron supplement intake during pregnancy correlated with the babies being born with higher amounts of iron in their systems.