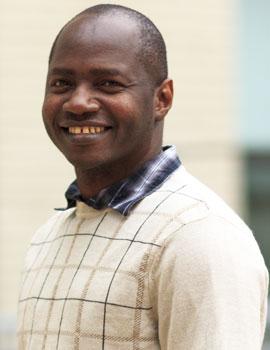 Tom Bangura joined J-PAL Global as a Research and Training Associate in July 2015, where he assists in the development of research content, fine tuning J-PAL's existing resources, and preparing them for publication online.  He also manages the J-PAL research newsletter that features new working and published papers by our affiliates and those funded by J-PAL. Future academic interests include experimental research, development and policy.

Tom received a Bachelor of science degree in Education from Njala University Sierra Leone in 2004 with a major in Geography. After graduating, he worked on multiple projects collecting data for Statistics Sierra Leone. As he became particularly interested in research, he became a Research Assistant of the Innovations for Poverty Action (IPA) in Sierra Leone in 2009, where he assisted in the implementation of a large scale agricultural survey in collaboration with Statistics Sierra Leone and the Ministry of Agriculture. This project was overseen by the president of that country and the nation's strategic policy unit with the aim of assessing and improving agricultural activities and productivity in the country critical to alleviating poverty. In 2011, he started working on a recently concluded evaluation that identifies and addresses the cost of early adoption of improved rice varieties.