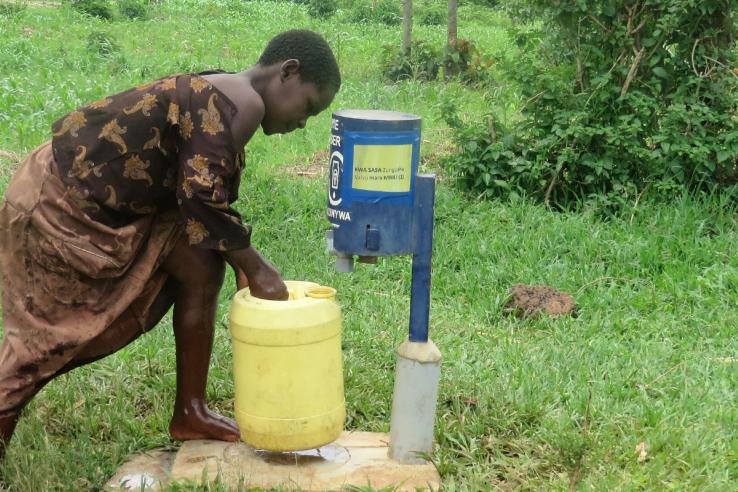 Point-of-collection chlorine dispensers are a low-cost, evidence-based innovation to increase access to safe drinking water. Research by J-PAL affiliates Michael Kremer (Harvard University), Edward Miguel (University of California, Berkeley), and Sendhil Mullainathan (University of Chicago), along with Clair Null, Jessica Leino, and Alix Zwane, has shown that point-of-collection water chlorination, in combination with encouragement from community promoters, can dramatically increase access to safe water compared to marketing bottled chlorine through retail outlets. Drawing on these results, Evidence Action has worked closely with local authorities to scale up point-of-collection chlorine dispensers in east Africa, reaching 4 million people over the course of the project.

Globally, more than 840 million people lack access to safe drinking water, putting them at risk of contracting a number of waterborne diseases, such as cholera, numerous worm diseases, typhoid, and dysentery. Access to safer drinking water, alongside improved sanitation and hygiene, can help prevent diarrhea, a leading cause of death among children under five years of age.1 Adding chlorine to drinking water can disinfect it against most bacteria and protect water from recontamination. Chlorinating water also eliminates the need to boil water to disinfect it, saving time and natural resources.However, encouraging take-up can be a challenge under distribution models that rely on households to purchase individually packaged chlorine. In Kenya, for example, 60 percent of households that were given free chlorine bottles used chlorine to treat their drinking water, compared with less than 10 percent who had to pay KSh 20 (US$0.30).2

From 2004 to 2008, J-PAL affiliated researchers and colleagues conducted a suite of randomized evaluations to investigate households’ use of chlorine in rural Kenya. Specifically, they measured how variations in price, marketing, and packaging of individual bottles of chlorine affected demand for chlorine in retail outlets and when sold door-to-door. They found that the use of chlorine was not sustained over time.

In a second phase of the evaluation, researchers designed and tested a point-of-collection chlorine dispenser system that provided a free supply of chlorine at local water sources. The dispenser system was designed to boost take-up by making water treatment convenient, providing a visual reminder, and encouraging peer learning and habit formation by making the decision to use chlorine public. Chlorine dispensers, in combination with paid promoters, increased take-up by 53 percentage points. Take-up was sustained 30 months into the program, even after payments to promoters had ended.

[…] Two years after installing the dispenser, 61 percent of sampled households had chlorine in their water, compared to less than 15 percent of households in the control group.

Based on research conducted by J-PAL affiliates and coauthors, more than 27,000 chlorine dispensers have been installed across Kenya, Malawi, and Uganda, providing access to clean water for 4 million people.

The Dispensers for Safe Water Program was first incubated in Kenya by Innovations for Poverty Action (IPA) after research showed the effectiveness of point-of-collection chlorination. The program has since transitioned to Evidence Action, an organization dedicated to scaling up proven interventions to improve the lives of the poor in Africa and Asia. Evidence Action works closely with local authorities and trained staff to manufacture, install, and maintain chlorine dispensers at community water sources in rural districts of Kenya, Malawi, and Uganda. At every water point, a local promoter is selected to take care of the dispenser, educate families on its use, and monitor usage. The chlorine supply is regularly delivered by motorbikes from central storage points.

Cost estimates from Kenya, Uganda, and Malawi suggest that the full cost of the chlorine dispenser system could be as low as US$1.28 per person per year. This cost includes both hardware and the recurring costs of chlorine refills, dispenser management, and maintenance, making the dispenser highly cost-effective.

Evidence Action is still exploring avenues for increasing the financial sustainability of this work at scale. An innovative carbon credit financing scheme was developed in the program’s early stages to cover the costs of service delivery. Chlorination allows people to drink safe water without having to boil it, which in turn averts carbon emissions from burning firewood. Raising funds through this channel has nevertheless remained challenging.

Efforts are underway to raise funds through two alternative sources: domestic government financing—drawing on cost savings from health budgets generated by safer drinking water—and village self-help group financing. This village-pooled funding method is now being used in a pilot partnership with Millennium Water Alliance and CARE to expand chlorine dispenser use in Ethiopia, where communities are already paying small amounts for water access.

12 result(s)
Doing good scientifically
Tricking people into being healthy
Social good = scale x impact (Who knew?)
Evidence-based development: A trend whose time has come?
Peer pressure can be a lifesaver
To Solve a Social Problem, You Need More than a Theory—You Need a Randomized Controlled Trial
A surprising barrier to clean water: human nature
Dispensers for Safe Water Wins Stone Prize for Innovation and Entrepreneurship in Water
For Clean Water, An Approach That Works
Water In The Time Of Cholera: Haiti's Most Urgent Health Problem
Small Changes, Big Results
Water Technologies: What Works Best in Poor Countries

1 result(s)
Cleaner Water at the Source