Last updated:
After research found that school-based distribution of deworming pills in areas with high infection rates boosted health and school attendance, the approach has been scaled to reach over 280 million children in 2019. 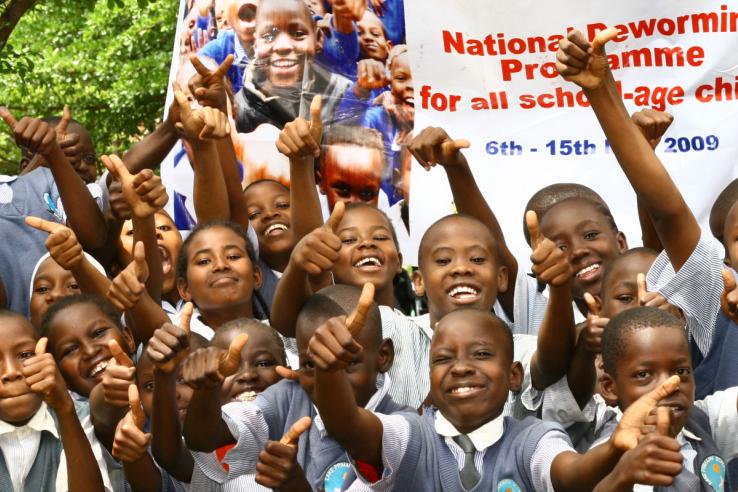 School-based deworming is a low-cost intervention that takes advantage of existing school infrastructure and trains teachers to administer deworming treatment—safe tablets—to all primary school students on dedicated “deworming days,” once or twice per school-year. Because the tablets are inexpensive relative to diagnosis, which requires analysis of a stool sample in a laboratory, the World Health Organization (WHO) recommends periodic mass treatments in areas where more than 20 percent of children have worm infections. Research by J-PAL affiliated professors Michael Kremer (Harvard University) and Edward Miguel (University of California, Berkeley) has shown that school-based deworming of students improved health and school attendance in Kenya. Subsequent research has shown that deworming also increased the percentage of girls who passed a primary school exam and attended secondary school, and increased hours worked for men who were in treatment schools as children. Research conducted by J-PAL affiliates has led to the launching of school-based deworming campaigns in Ethiopia, India, Kenya, Nigeria, and Vietnam.

The World Health Organization (WHO) estimates that over 835 million children are in need of treatment for intestinal worms, which are transmitted through contact with water or soil contaminated with fecal matter.1 Worm infections can reduce the absorption of nutrients in the body, leading to anemia and malnutrition, and weaken the body’s immunological response to other infections such as malaria. Infected children may become too sick to attend school or too tired to concentrate in class. Because intestinal worms are most prevalent in low-income countries where diagnosis is relatively costly, the WHO recommends periodic mass administration of anthelmintic drugs to groups of people in worm endemic areas. Oral deworming drugs are extremely effective with a single dose, at a cost of a few cents per tablet, and are safe for those without worm infections. Periodic administration every 6–12 months addresses reinfection and the health problems associated with high worm load.

Intestinal worms are pervasive in the developing world and can have devastating effects. But there is growing awareness about how easy and inexpensive it is to treat worms, as well as surprising longer-term socioeconomic benefits. Research shows deworming to be extremely cost-effective: you get a lot of bang for your buck.

School-based deworming improved school attendance in the short term, productivity in the long term, and benefited neighbors and siblings.

From 1998 to 2001, Kremer and Miguel evaluated the Primary School Deworming Project in Kenya. This program provided deworming tablets for soil-transmitted intestinal worms and schistosomiasis, as well as instruction on how to avoid worm infections, to children in 75 primary schools in rural Busia, Kenya.

At a cost of less than US$0.60 per child per year, school-based deworming reduced serious worm infections by 61 percent and reduced school absenteeism by 25 percent. There were positive spillovers in the form of reduced disease transmission among untreated children within treatment schools and for children who attended schools within three kilometers of treatment schools. Unlike previous studies, researchers quantified these spillover effects and showed that previous studies had underestimated the benefits of deworming.

A long-term follow-up found that deworming also improved school performance and future earnings. Deworming led to large academic gains for girls, increasing the rate at which girls passed the secondary school entrance exam by 9.6 percentage points over the comparison group mean of 41 percent. Men who were dewormed as children worked 3.5 more hours per week, spent more time in entrepreneurial activities, and were more likely to work in higher-wage manufacturing jobs than their untreated peers.

For more information about this project, see the evaluation summary.

Based on research conducted by J-PAL affiliates, school-based deworming campaigns have been adapted and scaled in Ethiopia, India, Kenya, Nigeria, and Vietnam.

Following a presentation of the evidence on the impact of school-based deworming by Kremer and Esther Duflo (MIT) at the 2007 World Economic Forum, Deworm the World was launched as an independent organization to coordinate technical assistance and advocacy efforts for sustainable, large-scale school-based deworming programs.

In 2009, Kenya’s then-Prime Minister, Raila Odinga, announced the start of the National School-Based Deworming Programme at the World Economic Forum Annual Meeting. The program is a collaboration between the Kenyan ministries of Education, Science, and Technology, and Health. Kenya’s National School-Based Deworming program is now in its seventh year since being relaunched in 2011, consistently treating over six million children across the country. Even during the Covid-19 pandemic, the program reached 2.8 million children two months after schools reopened.

In 2010, J-PAL hosted a conference with the government of the Indian state of Bihar to share evidence on school-based deworming and other promising programs. Following these discussions, the Bihar government, with support from Deworm the World, launched a state-wide deworming campaign, reaching 17 million children in 2011. Other large-scale deworming programs followed in Andhra Pradesh, Delhi, and Rajasthan in subsequent years and, in February 2015, the Government of India launched a national deworming program. This program now reaches 260 million schoolchildren each year. When schools were closed during the Covid-19 pandemic, the government adapted the program to be delivered by frontline health workers.

The Deworm the World Initiative is now a program of the nonprofit organization Evidence Action, which builds long-term partnerships and provides technical assistance to help governments including in Kenya and India launch, monitor, and sustain school-based deworming programs. Incorporating best practices from India and Kenya, the Government of Ethiopia also launched a national school-based deworming program in 2015 with support from the Deworm the World Initiative and the Schistosomiasis Control Initiative. In 2017, the program treated nearly 15 million children.

In 2016, a national-level survey was conducted in Pakistan to map worm prevalence and intensity. The survey indicated the need for annual deworming treatment for an estimated 17 million school-age children in 45 at-risk districts across the country. With support from Evidence Action and partner Interactive Research & Development, the Federal Ministry of Planning, Development and Special Initiatives incorporated the deworming program into the Government of Pakistan’s five-year plan in 2019. In 2021, the government launched its first national deworming awareness campaign in order to achieve widespread national recognition for the Pakistan Deworming Initiative. That year, 8.3 million children in Pakistan received deworming treatment.

Beyond these national-level strategies, the World Health Organization has also cited this research in informing the expansion of their deworming program.

The study by Michael and colleagues essentially confirmed the benefits of deworming, advocated for and facilitated the expansion of the programme that in 2018 alone treated over 450 million schoolchildren worldwide.

— Antonio Montresor, head of the control programme for soil-transmitted helminthiases, WHO 2019

54 result(s)
WHO: Nobel prize recognizes deworming’s contribution to improving children’s health and school performance and alleviating poverty
We Need to Talk about Intestinal Worms
From instincts to evidence: a policymaking journey
Ideas help no one on a shelf. Take them to the world.
Deworming: Now more than ever, a best buy for development
The scientific case for deworming children
Deworming: An informed debate requires a careful look at the data
Mass deworming: (Still) a best buy for international development
The author of a contentious study on deworming speaks out
India deworms 50% of schoolchildren; achieves WHO target
Outsized outcomes
Doing good scientifically
Worms win, kids lose? Our statement
The positive impact of deworming in Kenyan schools: the evidence untangled
Commentary: Deworming externalities and schooling impacts in Kenya: a comment on Aiken et al. (2015) and Davey et al. (2015).
Understanding deworming impacts on education
The most efficient way to save a life: malaria nets
Getting rid of the worms
Delhi government to deworm 3.7 million kids
School for scaling
India starts deworming campaign to protect young population
Tricking people into being healthy
Deworming improves child cognition. Eventually.
Social good = scale x impact (Who knew?)
To Solve a Social Problem, You Need More than a Theory—You Need a Randomized Controlled Trial
Delhi government launches mass deworming to cover 3.6 million kids
Deworming Delhi: A project-management perspective
Elephantiasis, Snail Fever, Roundworm, More: Eliminating 7 Neglected Diseases that Affect World's Poorest by 2020
In India, a Small Pill, With Positive Side Effects
Deworming to stay in school
Evaluating The Best Ways to Give to the Poor
Millions of Children in Indian Capital to Be Dewormed
Kenya Launches Scheme to Deworm 5 Million Children Annually for Next Five Years
J-PAL Partner Deworm the World Featured at World Economic Forum in Davos
Indian state implements record-breaking school health campaign for 17 million children
Mass De-Worming Drive for Bihar Children from Monday
State Takes Up Children's Deworming Exercise
Indian State of Bihar Makes History with World’s Largest School-Based Deworming Program
Deworming makes history: From research to action in India
Raila Wants School Health Drives Back
To Use or Not to Use: Getting People to Adopt New Health Technologies
Getting Smart on Aid
Small Changes, Big Results
Tummy Worms? Cure in School
Deworming Drive for Children of Over 900 Government Schools
Deworm the World Comes to India
Deworm the World, Deworm the Children…
MIT Professor Works to "Deworm the World"
Kenya Commits to Deworm Children
Young Global Leaders' Deworming Programme Reaches Millions of Children
Clinton Honors Global Deworming Effort
Cherie Blair Wants to Kill the World's Intestinal Worms
Attack of the Worms
State to Spend sh70m to Deworm Children