Intimate partner violence (IPV) is widespread and common around the world with many consequences, including physical and mental harm for women. Several studies have shown that cash transfer programs can decrease IPV, with existing evidence focused on transfers directed to women in programs in Latin America and East Africa. Cash transfer programs may offer a promising approach to reduce IPV worldwide, as over 130 countries are implementing such programs, reaching approximately 718 million people globally. However, there is limited evidence on how impacts on IPV differ across program features, like when targeted to mostly male household heads, and contexts where polygamy is prevalent. This is an important knowledge gap as cash transfer programs throughout Africa often target male household heads and polygamy is a common practice in West Africa. Can cash transfers to household heads impact IPV, and does the effect depend on whether the household is polygamous?

In Mali, rates of intimate partner violence are high: as of 2012, nearly 40 percent of women ages 15-49 had experienced physical IPV in their lifetime, and about a quarter of women had in the past year. Polygamous marriages are also legal and common. According to national surveys, about 35 percent of married women aged 15-49 were in a polygamous union. Compared to monogamous ones, polygamous marriages may face additional challenges to coordinate decisions, share information, and monitor household members, and these tensions may increase the risk of IPV.

Of the households that participated in the evaluation, women were on average 32 years old and about 5 percent were literate. Their male spouses were on average 12 years older than them with higher literacy rates (12 percent in the comparison group and 17 percent in the program group). Nearly 40 percent of participants were in a polygamous marriage. The average household size included about 10 people with the vast majority of household heads identifying as Muslim. 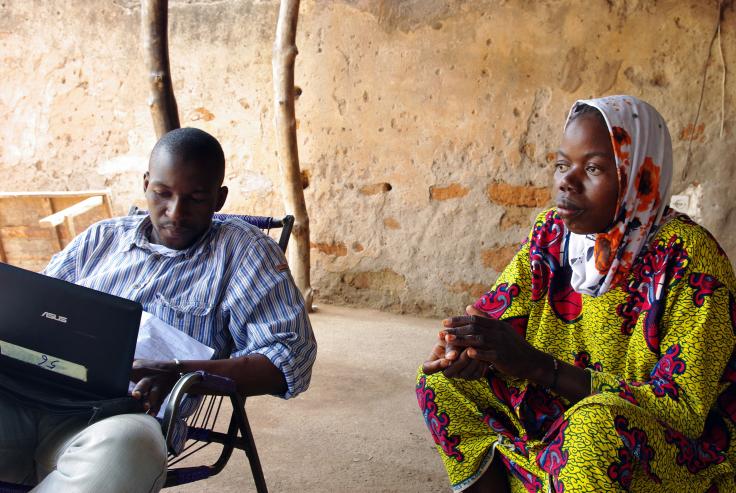 In partnership with the Government of Mali, researchers conducted a randomized evaluation in five regions of Mali to test the impact of an unconditional cash transfer program on household well-being, including intimate partner violence. In 2014, the government began implementing a new national cash transfer program (Programme de Filets Sociaux or Jigisémèjiri) that provided low-income household heads with a transfer valued at 10,000 CFA per month (equivalent to US$18 or about 9 percent of the household’s monthly consumption) and paid quarterly for three years. In addition to the cash transfer, the program also provided optional training sessions covering a range of topics including women’s nutrition and children’s rights, as well as preventative nutrition packages (PNP) to a subset of young children and pregnant women. However, the optional trainings were reported to have low attendance and the PNP component had not been implemented at the time of the evaluation.

Of 96 eligible communes, the Government of Mali and researchers randomly assigned 76 to receive the Jigisémèjiri program and the remaining twenty communes served as the comparison group, which received access to the program after two years. Households in the program communes were chosen to receive the cash transfer on the basis of food security, agricultural assets, income stability, and household composition.

Researchers surveyed participants before the evaluation and two years after the start of the program. To understand effects of the program on IPV, surveys asked one woman per household (usually a spouse of the household head) about the occurrence of various abusive acts, including emotional violence, physical violence, and controlling behaviors, in the past twelve months. In addition, surveys with the household head and others assessed family dynamics, economic well-being, women’s empowerment, and men’s emotional well-being.

Overall, the results add to existing evidence demonstrating that cash transfers can reduce IPV and illustrate that transfer design and context shape results. With governments increasingly implementing cash transfer programs, this study demonstrates that targeting primarily male household heads can also reduce IPV, even without impacting women’s empowerment, and impacts can differ by household structure. However, policymakers should consider that targeting male household heads may reinforce gender norms and impacts on IPV may not be sustained if effects on men’s emotional well-being dissipate.