Are Agricultural Traders Colluding? Testing the Degree of Competition Among Maize Traders in Kenya

Agricultural traders and intermediaries operating in rural markets in Africa play a defining role in the price and availability of staple commodities like maize. Researchers conducted three randomized evaluations to measure the degree of competition among wholesale maize traders, understand the implications for social welfare, and test whether new traders could make a market more competitive.  Researchers found that traders did not pass through much of a randomly administered cost reduction by lowering prices to consumers and, instead, colluded with other traders to maximize their profits. Incentives to encourage traders to enter new markets resulted in trader entry but did not have a meaningful effect on market prices.

Prices of staple crops in rural markets is a key policy concern for food security and agricultural livelihoods. Well-integrated agricultural markets can tackle both sides of this food-price policy dilemma, by pulling crops out of surplus areas (to boost prices received by farmers) and pushing food into deficit areas (to reduce prices faced by consumers). Agricultural traders and intermediaries play a defining role in these markets. Leveraging their market power, traders can influence the price and quantity of goods sold at market. For example, when traders collude, or coordinate among themselves to set a common price, they can elect to reduce the value passed onto farmers and consumers, resulting in higher prices to consumers and lower prices for agricultural goods paid to farmers. In competitive markets, price gaps could be purely due to high transactions costs and policies that reduce these costs would yield savings that traders would pass on to farmers and consumers. However, if markets are imperfectly competitive, policies aiming to address commodity prices may need to explicitly target enhanced competition among traders and intermediaries and reduce barriers for newcomers to enter the market to reduce the potential for collusion. Understanding the degree to which traders can influence market prices, implications for social welfare, and whether market entry incentives can make markets more competitive can inform policies with the potential to improve competition, thereby benefiting both farmers and consumers. However, more research is needed to understand how traders in these markets operate and what could prevent markets from being competitive. Can providing incentives to traders and consumers shed insight on the presence of market influence by traders, can new traders increase competition in a market, and how does increasing market competition affect welfare?

Staple crops, like maize, are important for income generation and food security in Kenya, where household expenditure on maize was about 9 percent overall and 14 percent among households in the lowest income bracket in 2015. Maize is produced across Kenya and Uganda and purchased by traders who store, transport, and then sell it in markets. These traders sell the maize to a variety of consumers, including households, grain millers, other traders, and larger companies.

Traders eligible to participate in the evaluations mainly worked in open-air markets across six counties near Bungoma, Kenya. The average trader completed some secondary school, and only 58 percent kept written records. Most traders were a one-person business, and only 37 percent had an employee. Traders often worked in the same market every week, and only 6 percent said that they did not know other traders in the market very well. While only 30 percent of traders reported engaging in an explicit price agreement with other traders, 72 percent of traders worked in markets where at least one trader reported the existence of a price agreement in a given day. 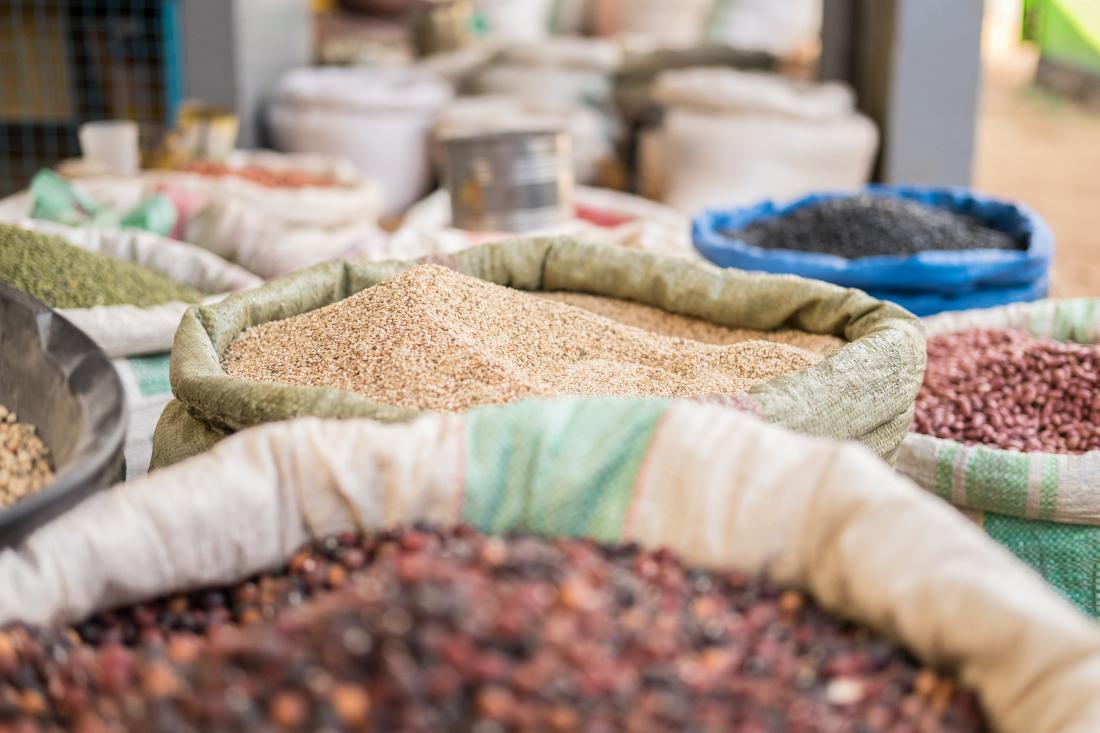 Sacks of grains in an open air market in Kenya.
Photo: Shutterstock.com

Researchers partnered with Innovations for Poverty Action to conduct three randomized evaluations to assess the level of competition among wholesale traders in Kenyan maize markets. In collaboration with the Directors of Trade for six counties in Western Kenya, researchers identified sixty eligible markets (forty markets within 50 kilometers of Bungoma and twenty markets outside this radius).

During a period of twelve weeks from March to July —which constitutes the “lean season” when traders sell maize to consumers in the region—researchers randomly assigned markets to schedules alternating between the following three interventions. Each intervention targeted to traders lasted for four weeks.

Throughout the study period, researchers conducted surveys to collect data on prices and quantities sold, transactions, price negotiations between consumers and traders, payment methods used, traders’ profits, revenues, and costs, their relationships to other traders in the market, and whether traders knew of price agreements in the market.

Traders did not pass through much of experimental cost reduction via a discount to consumers, suggesting that traders – perhaps tacitly -- coordinate with other traders to maximize their profits.  Researchers also found that market entry had a limited effect on prices.

Value pass-through and consumer demand experiment: Traders who were offered either the high or low maize subsidy reduced the price per kilogram of maize offered to consumers by 22 percent, suggesting that traders absorbed more of the surplus afforded by the subsidy, rather than passing it onto consumers through a price reduction. This rate does not vary substantially between traders, meaning that many traders reduced the price per kilogram by the same margin.

In terms of market entry, traders entered new markets during 38 percent of all intervention days when subsidies were offered, and more than one new trader entered a market in 26 percent of market days. When a trader entered a new market, the price of maize offered to consumers in that market decreased by KES 0.28 (US$ 0.003), or about 1 percent, suggesting limited impact on prices. There were bigger effects on price when a trader without an existing contact entered the market, but it was hard to convince these traders to enter.

Welfare: The researchers estimate the consequences of this market structure for the division of surplus generated by trader sales to consumers.  Consumers receive 18 percent of the total surplus, while traders get about 82 percent. However, the typical trader captures a fairly small fraction of his revenue as profits. There was substantial variability in traders’ profit margins, where some traders sold very large quantities of maize at high price mark-ups. Specifically, participating traders’ average daily profits were approximately KES 13,000 (US$ 127.41), while 8 percent of traders earned more than KES 40,000 (US$ 392.04) in daily profits. Researchers suggest that while the typical trader is not making large profits, the typical consumer is being served by a trader who is earning large profits.

Taken together, these results suggest that traders exhibited a high degree of power in determining prices at market by coordinating – perhaps tacitly -- with other traders. Policies that seek to address market structures or the prices of staple goods should target markets where there are larger-scale, high-margin traders.