Assessing the Impact of Microcredit in Ethiopia

Microcredit is widely believed to create opportunities for entrepreneurs and families to improve their economic and social well-being. Researchers analyzed the introduction of microcredit programs in parts of rural Ethiopia to evaluate the effect of improved credit access on economic and social outcomes. They found that introducing microcredit programs increased the frequency of borrowing and amount borrowed by rural households in Ethiopia, but found mixed evidence that microcredit improved economic well-being or socio-economic indicators.

Microcredit is widely believed to create opportunities for families and entrepreneurs to improve their economic well-being by achieving stability in spending and earnings, as well as enabling investment in business inputs. While microcredit has received praise and criticism for its poverty-fighting potential, this recognition is often based on generalizations about the microfinance movement or on less-than-concrete evidence such as simple comparisons of borrowers and non-borrowers. Attempts to determine the true impact of microcredit programs are complicated, for example, by the fact that the choice to become a microfinance borrower may itself be a sign of increased ambition and ability to improve one' s economic situation. To date, few studies have rigorously quantified the impacts of microcredit loans on the beneficiaries and their communities, particularly in Africa.

Amhara and Oromiya are rural areas in Ethiopia. Study populations in both regions were poor, with approximately 85 percent of households depending on agriculture as their main source of livelihood. Agriculture and animal husbandry activities were sometimes coupled with small-scale retailing or day labor as an added source of income. The level of education was low, and more than 70 percent of household heads had not attended school. Food scarcity was common, with households lacking enough food for more than two months a year on average. Less than 3 percent of households had any ties to a formal financial institution, and only 13 percent of households had an outstanding loan at baseline. The study was conducted in collaboration with two microfinance institutions, the Oromiya Credit and Savings Share Company (OCSSC) and the Amhara Credit and Savings Institute (ACSI). Both offer microloans to small, self-formed groups of borrowers who are collectively responsible for loan repayment. Repayment periods are generally for one year at an average interest rate of 12 percent. Both institutions reported repayment rates higher than 95 percent in the years prior to the evaluation. 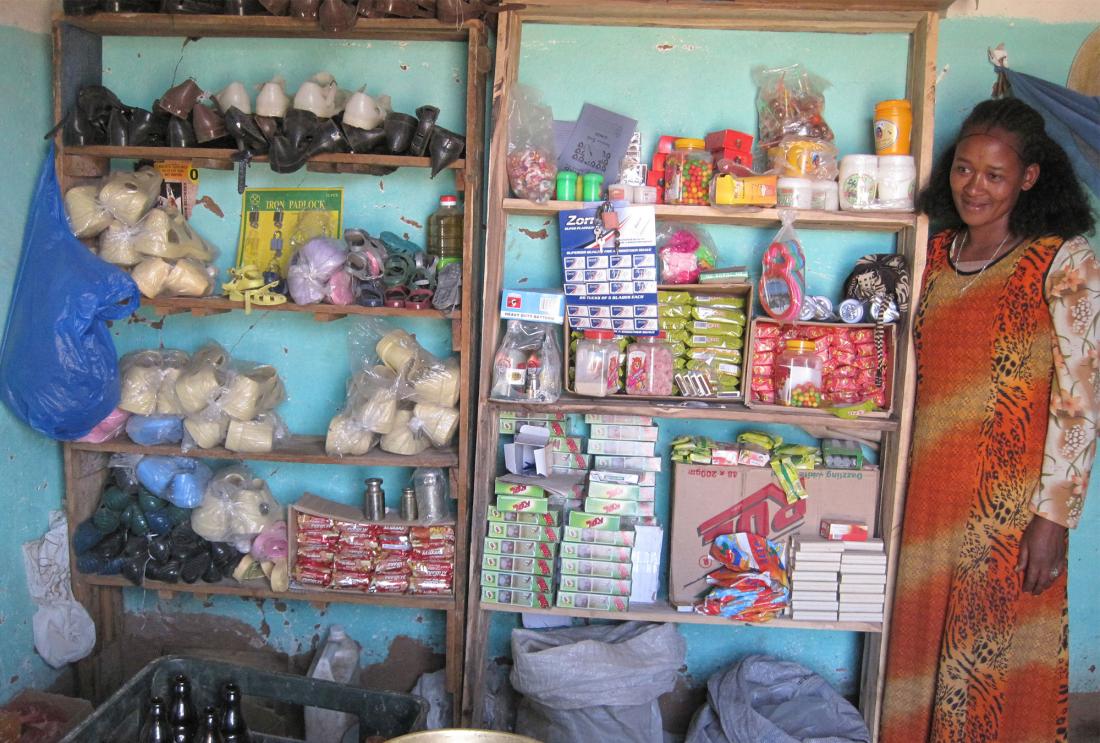 Researchers identified parts of Amhara and Oromiya in which the David and Lucille Packard Foundation intended to expand its family planning and microlending activities through the OCSSC and ACSI. A total of 133 "peasant associations," or PAs (large administrative units in Ethiopia) covering 353 villages, were randomly assigned to one of four groups:

Data were collected on a broad range of outcomes, including income generating activities, asset ownership, schooling, and decision-making power of women about three years after lending began.

Overall, the program led to a substantial increase in both the probability of borrowing and the loan size, but there is limited evidence that it increased household income, improved school attendance or empowered women in household decision-making. An earlier study showed that the family planning program components had no impact on contraceptive use or fertility either in isolation or when coupled with the microcredit program.

Microcredit take-up: In peasant associations (PAs) where the microcredit program was offered, borrowing rates rose from 22.3 percent to 47.5 percent. This expansion in credit access was largely driven by an increase in the fraction of households that borrowed from OCSSC or ACSI. Despite the lack of enforcement in targeting women, the proportion of loans initiated by women increased in villages where microlending became available. Households offered microcredit also reported larger loan amounts, on average. Those in microcredit offer areas reported an average 589 Birr (approximately US$206) in total loans, compared to 200 Birr (approximately US$70) in comparison villages.

Business activity and household finances: While those assigned to the microcredit program showed some increases in their revenues from non-farm businesses and from crops, land cultivated, and livestock owned and sold, relative to the comparison group, these changes were not statistically significant. This lack of statistically significant impact could be due to the relatively small number of PAs participating in the study. More research, with large treatment groups, will be needed to obtain conclusive results.

Education and women' s empowerment: The introduction of microcredit had no impact on school attendance or women' s decision-making power as reflected by the fraction of household decisions that women were involved.

Similar to other recent randomized evaluations on the impacts of microcredit, this study found that microcredit programs may not have the anticipated transformative effects on economic and social well-being, at least in the short-term. However, the results are also consistent with some benefits from increased access to credit, and the lack of statistically significant program impacts may be due to the relatively small number of PAs that participated in this study.