Prices of staple foods like maize, beans, and rice vary substantially in sub-Saharan Africa, depending on the season, country, and region. Barriers that prevent buyers and sellers from easily finding each other in a marketplace can contribute to large variations in prices of goods across markets. Researchers conducted a randomized evaluation in Uganda to test the impact of a mobile phone-based marketplace for agricultural commodities on local market prices, entry of traders, farmer revenue, and trader profits. Overall, the platform increased trade flows and decreased price variation across markets, especially among markets close to each other. Revenues of farmers in surplus areas increased and there was a significant reduction in average trader profits.

Prices of staple foods like maize, beans, and rice vary substantially in sub-Saharan Africa, depending on the season, country, and region. The inability of markets to efficiently move food from surplus to deficit regions has large effects on welfare. For producers, access to output markets is critical because agricultural sales can comprise the majority of their income. For consumers, well-functioning food markets are necessary to direct food to locations where it is most needed.

While the imbalance of food supply in markets is often attributed to high transportation costs—which in Africa are the highest in the world—other factors likely limit the movement of crops across markets as well. In particular, there is growing attention to the role of “search costs,” or barriers that prevent buyers and sellers from easily finding each other in a marketplace. Although the introduction and rapid spread of mobile phones has improved the information available to buyers and sellers, it remains unclear how to best utilize these mobile platforms. For instance, recent studies that focus on the dissemination of stand-alone price information to farmers via mobile phones have had mixed results. Can a more comprehensive mobile-based marketplace that connects buyers and sellers reduce search costs and encourage greater competition among intermediaries of agricultural commodities?

A large portion of people in Uganda face food insecurity, though rates vary regionally. More than one-third of Ugandans have low dietary diversity, consuming mostly staple crops, but, in the western region, where there are also the highest rates of childhood stunting, this increases to 55 percent of the population. Maize is a major staple food for Uganda’s population, though market prices vary substantially across regional markets and time of year. Maize farmers and traders often cite a lack of updated and timely information, such as market prices and connections to buyers or sellers, as a barrier to profitable trade. Access to this information can help farmers expand their options, selling to a wider range of buyers and allow traders to take advantage of previously unexplored markets. Mobile phones are used frequently as a medium for sourcing price information. In addition to phones, traders also use radio broadcasts and SMS services to identify local and regional prices. Relative to traders with access to some technologies, farmers may be less informed about prices: in this context, only 6 percent of farmers reported discovering prices through radio broadcasts, and 8 percent through SMS.

Responding to this demand for information, Kudu, a digital platform, was developed in partnership by Makerere University and Microsoft Research to provide a new way for buyers and sellers to connect, with the goal of reducing search costs. Users could post requests to sell or purchase maize onto the Kudu platform using a smartphone, SMS, or through a call center. Buyers and sellers would then be matched based on price, quantity, and location. The average participating market (permanent trading centers) had six traders, though a few were larger regional trading centers with up to fourteen traders per market. Traders in these markets had low turnover, meaning they continued to work in the same markets throughout the study, and sold maize at high profits; for example, before the start of the study, traders sold their maize for 29 percent more than they purchased it from farmers. 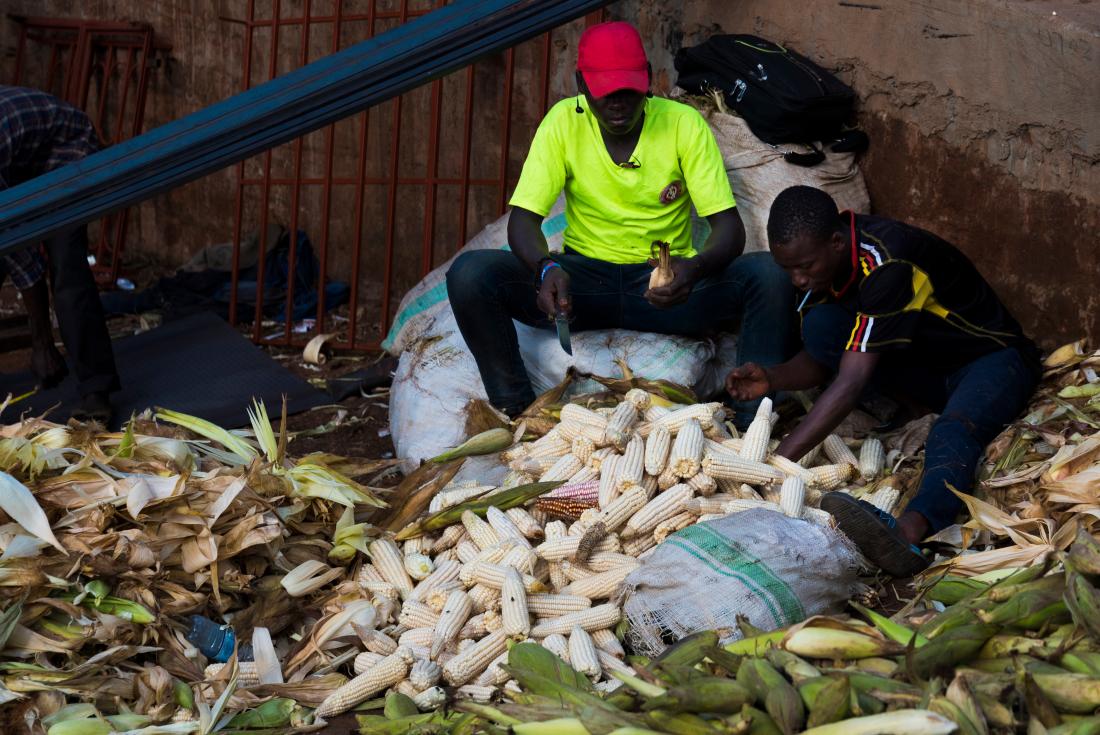 Researchers conducted a randomized evaluation to test the impact of a mobile phone-based marketplace for agricultural commodities on local market prices, entry of traders, farmer linkages to markets, and profits. They rolled out the mobile platform in 110 sub-counties within eleven districts in Uganda that produce maize and had a strong potential for commercialization. First, among the 110 sub-counties (with 236 markets), 55 were randomly assigned to receive access to the core mobile platform called “Kudu” while the other half served as the comparison group.

To deploy Kudu, researchers worked with AgriNet to recruit and train 210 Commission Agents (CAs) from existing traders in the study area to promote the mobile marketplace. However, CAs were not reliable promoters of the platform (though they used it quite heavily for their own trading needs). Instead, full-time staff were hired to promote the platform to other traders and farmers. In addition to this, an SMS system that distributed high-frequency price information and promoted the platform was set up to target all traders, CAs, as well as a random three-quarters of the farming households in the sub-counties with access to Kudu.

Participants received access to the Kudu platform from 2015 to 2018, spanning six major agricultural seasons. A subset of traders were surveyed to analyze how the intervention drove their trading behavior, prices offered, and profits. Researchers also surveyed a subset of farming households to study the impacts of the platform on farmer revenue and welfare.

Overall, use of the platform led to increases in the flow of trade and decreases in price dispersion across markets, especially among markets close to each other. Revenues of farmers in relative surplus areas (where there was a larger supply of maize) rose, and average trader profits decreased.

Platform usage: Over the three years that the Kudu platform was operational, about 7,300 tons of grain were successfully transacted, worth about US$2.3 million. Platform usage was concentrated among traders; only the largest farmers found it profitable to use the system. Specifically, 80 percent of traders in the Kudu group posted to the platform at least once and 22 percent successfully conducted a trade. However, only 26 percent of farmers posted to the platform, and a mere 2 percent successfully traded on the platform.

Trade flows: Access to Kudu increased the probability of any trade occurring and the volume of trade flowing between participating sub-counties. The platform also increased trader entry, driving a larger number of traders to engage in trade along routes with access to Kudu. However, these effects were strongly concentrated among sub-counties and markets that were close to each other, with almost no effect of the platform on direct trading between markets over 200 kilometers apart. This suggests that the platform fell short in connecting remote farmers directly with urban buyers in distant markets, despite its success in generating additional short-distance trade.

Price convergence: Markets close together saw a reduction in price variation of 8 and 15 percent when one and both markets were in the Kudu group, respectively. A smaller decrease in price variation was observed even for markets that were further apart. Prices in relative surplus areas (where prices tended to be low) increased, and prices in relative deficit areas (where prices tended to be high) fell. There was no change in the average price across all markets, suggesting that the gains from the intervention came from moving grain from places of relative abundance to places of relative need, rather than from increasing prices everywhere.

Profits: Traders in Kudu sub-counties experienced a 14 percent reduction in profits stemming from lower trader markups (the difference between the price at which a specific trader buys and sells). On the other hand, markups increased among traders who did not substantially mark-up prices prior to the evaluation, suggesting that Kudu may have advantaged these traders at the expense of initially higher-markup traders. Among farmers, the platform increased the revenues of farmers in surplus areas, where prices increased.

Together, these results suggest that while search costs inhibit trade in many sub-Saharan African markets, mobile-based agricultural trading platforms can reduce price variance and facilitate greater trade. However, the large costs associated with operating the platform and the lack of impact on the smallest as well as more remotely located farmers, suggests that further research is needed to understand how to make such platforms more profitable and equitable.