Many developing countries have achieved very high rates of primary school enrollment. However, student attendance on a day-to-day basis remains a challenge because families may have to choose between sending their children to school or to work. Researchers analyzed the effects of a small conditional cash transfer for education in Honduras on school enrollment and child labor. School enrollment increased by 12 percent and child labor decreased by 30 percent among all students eligible for the transfers, with even greater impacts on the poorest students.

Over the past decade, many developing countries, energized by initiatives such as the United Nations Millennium Development Goals, which call for achieving universal primary education by 2015, have expanded primary school access. Many countries, like Honduras, have achieved very high rates of primary school enrollment. However, student attendance on a day-to-day basis remains a challenge because families can face opportunity costs in sending their children to school. Both enrollment and attendance issues are thought to be more pronounced among girls, low income families, and older children, because families might be less willing to invest in their daughters than their sons because of future returns, low income families are more immediately cash constrained, and older children have the potential to earn more. Conditional cash transfer programs have proven effective at improving education outcomes in some settings (notably Mexico's PROGRESA/Oportunidades program); however, little is known about their impact on these specific segments of the population.

Honduras is the second poorest country in Central America, and suffers from both an extremely unequal income distribution, as well as high underemployment.1 The program targeted 70 of the poorest municipalities in Honduras. For those municipalities in the treatment group, cash transfers were made available for children aged 6-12, who had not yet completed 4th grade. Though the average primary school enrollment rate in Honduras is above 90 percent, of the children who were eligible for this program, only 65 percent on average were attending school. Additionally, 10 percent of the eligible children were working outside of the home and 14 percent were working inside the home.

The Programa de Asignacin Familiar (PRAF), or Family Allowances Program, was started in the early 1990s to distribute cash subsidies to families with children in early primary school as well as pregnant mothers. Subsidies were conditioned on regular school attendance and health center visits. The program was re-launched as PRAF-II in the late 1990s in order to address some of the weaknesses of the existing program. PRAF-II featured stricter enforcement of the conditionalities of subsidy distribution, direct investments in schools and health centers to complement the distribution of cash to families, improved poverty targeting mechanisms, and an evaluation embedded in the program roll-out. 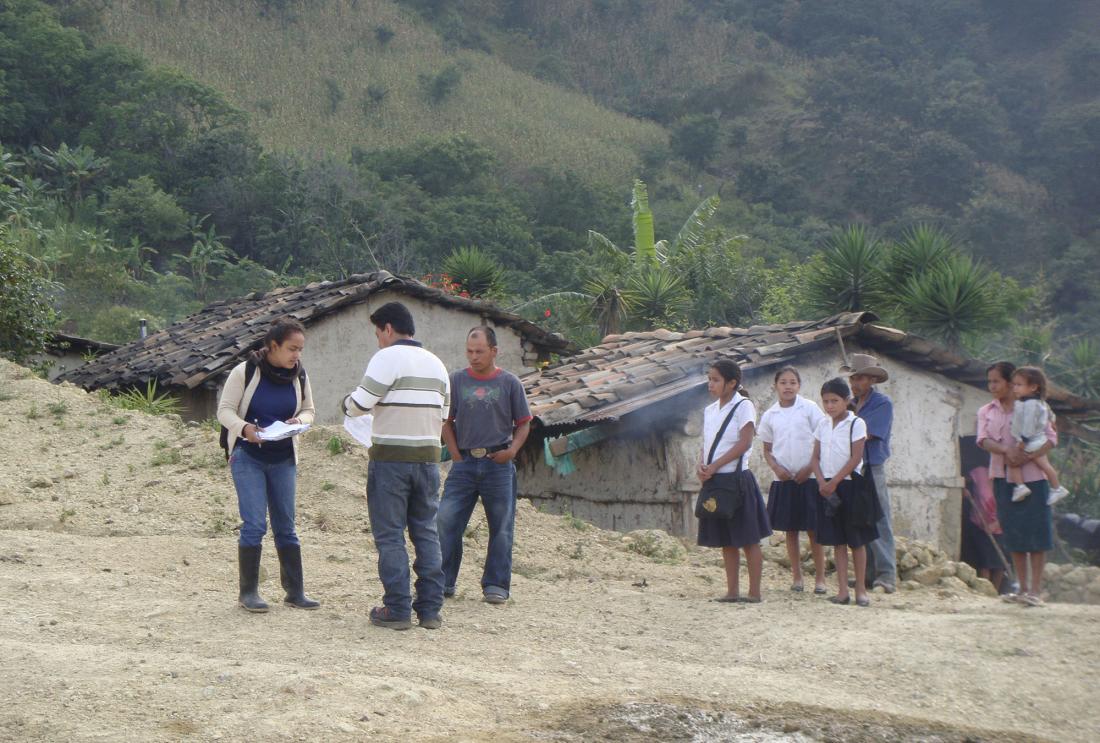 Villagers gather around a survey team in Lempira, Honduras.

PRAF-II also planned to give cash transfers to schools and health centers of US$4,000 and US$6,000 respectively . However, the distribution of these funds was extremely limited in practice, mostly due to legal hurdles in forming community groups authorized to administer funds.

For all children eligible to receive the education transfer, school enrollment increased by 12 percent and reduced child labor by 30 percent and work inside the home by 29 percent.

Lowest income families: The impacts of the program were highest among the lowest income families. Child height-for-age was used as a poverty proxy to determine which municipalities would be eligible for the CCT program. This same proxy was used to determine the poorest households within the municipalities. Among the bottom forty percent of households, enrollment increased by 16 to 32 percent, child labor decreased by 50 to 55 percent, and work inside the home decreased by 38 to 46 percent.