A number of low-income countries subsidize the price of staple foods such as rice in an effort to improve nutrition, and these programs generally enjoy great public support. However, subsidizing staple foods may cause households to shift to their spending to better-tasting foods that are actually less nutritious. In China, researchers analyzed the impact of food subsidies on nutrition and found no evidence of a positive impact. In fact, the subsidies may even have caused some households to consume fewer calories and important vitamins and minerals.

A number of low-income countries use consumer price subsidies in an effort to protect or improve the nutrition of the poor. Such food-based welfare programs often enjoy greater public and political support than other welfare programs, such as unconditional cash transfers, because of the general presumption that they can be counted on to improve nutrition. However, little empirical research has been done to actually assess the nutritional impacts of consumer price subsidies. It is theoretically possible that price subsidies for staple foods could actually have detrimental impacts on nutrition if, by lowering the cost of the staple foods, subsidies free up funds and allow households to substitute away from the now cheaper staples and towards foods that are more appealing but less nutritionally dense. If such effects, often called "Giffen effects" by economists, do exist, they would call into question the effectiveness of food subsidy programs at improving nutrition, health, and related non-health outcomes.

Approximately 90 million people in China are officially designated as "urban poor," including the households in this sample. Each of these households falls below the Di Bao (a national cash transfer program) urban poverty line of US$0.41 to US$0.82 per person per day. Additionally, surveys indicate that these households are very undernourished by international standards: the average daily caloric intake at baseline among adults aged 18-60 years in this sample was roughly 2,020 calories for men and 1,720 calories for womenfar below even the low range of international standards (roughly 2,330-3,160 calories per day for adult men and 1,840-2,150 calories per day for adult women). At baseline, intake of several key nutrients was extremely low: people consumed 11 percent less than the daily recommended intake (DRI) for protein; one third or less of the DRI for calcium, potassium, sodium, and Vitamin B12; and about one half of the DRI for magnesium, phosphorus, zinc, and Vitamin A. Overall, these urban poor live very close to the boundary of subsistence: in Hunan, surveyed households received on average 64 percent of their calories from the local staple (rice), while in Gansu, households received on average 69 percent of their calories from the local staple (wheat flour). 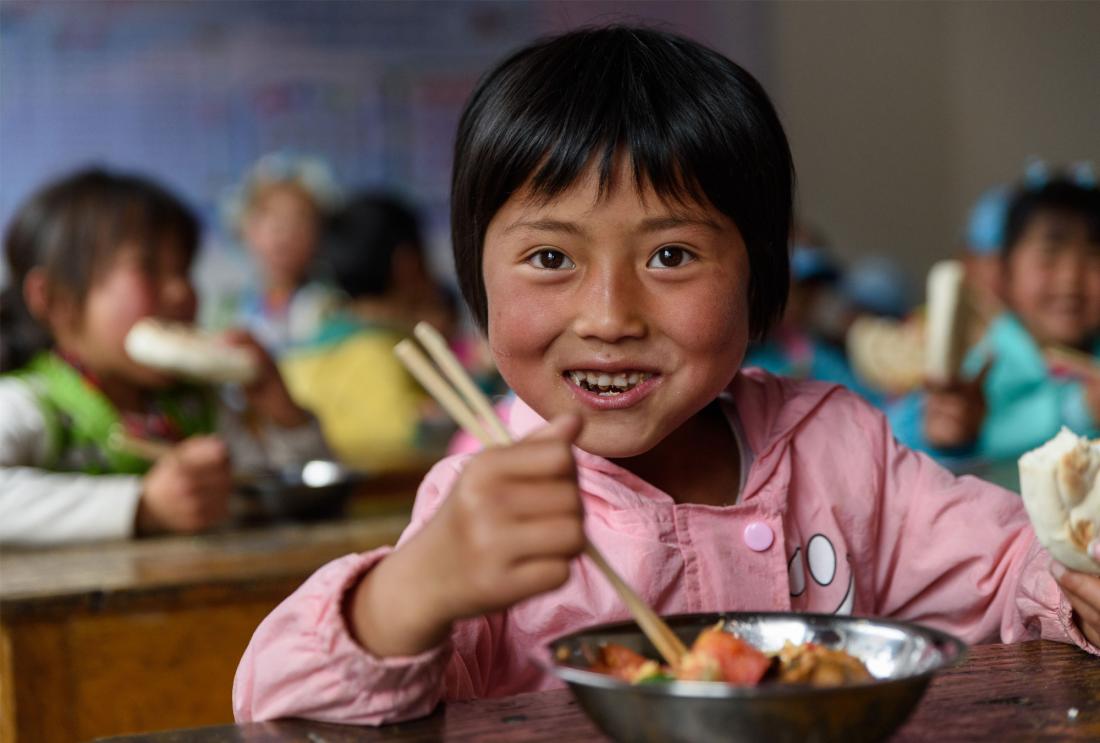 Provincial-level agencies of the Chinese National Bureau of Statistics randomly selected 1,300 households in Hunan and Gansu provinces to participate in this study, and then randomly assigned them to either a comparison group or one of three treatment groups. In the three treatment groups, households received vouchers entitling them to a price reduction of 0.10 yuan, 0.20 yuan, or 0.30 yuan respectively off the price of each 500 grams of the staple good (rice in Hunan and wheat flour in Gansu) over the next five months. These subsidies represented substantial price reductions: the average pre-intervention price of rice in Hunan was 1.2 yuan per 500 grams, while the average price for wheat flour in Gansu was 1.04 yuan per 500 grams. The month's supply of vouchers was distributed at the start of each month, with each household receiving vouchers for 750 grams per person per dayabout twice the average per capita consumption of these staples prior to the intervention. All vouchers remained valid until the end of the intervention.

Data was collected through a standard income and expenditure survey, as well as a 24-hour food recall diary that was to be completed by each household member. Respondents were asked to report everything they ate and drank each day by listing the components of all things consumed in the diary. Diary entries were then compared to official data on the nutritional value of foods in order to more fully understand any changes in nutritional intake caused by this intervention.

There was no evidence that the consumer price subsidy improved nutrition, and results suggest that it may have actually reduced the intake of calories and several important vitamins and minerals in Hunan. In Hunan the price subsidy on rice caused households to exhibit Giffen behavior; they cut back on their consumption of rice, vegetables (primarily cabbage and spinach), pulses (bean curd and tofu), and fats (primarily cooking oil), and increased their consumption of seafood. A great deal of calories were lost from the reduced consumption of rice and pulses in particular, and only part of this loss was recovered through the increased consumption of seafood, leading to a net decline in calories consumed. Additionally, large declines in other nutrients such as Vitamin A resulted from the reduced consumption of vegetables such as spinach.

In Gansu, there was less evidence of Giffen behavior; but nutritional intake did not increase for any nutrient group. One interpretation of this result is that as in Hunan, subsidized households in Gansu sought to add taste to their diets, but since they still could not afford meat or seafood, they opted for the lower-cost option of increasing edible oils, which are often eaten with bread made from wheat flour, the staple good. Since increased consumption of oil did not correspond to decreased consumption of other foods, overall average caloric intake did not decline; however, because oil is largely devoid of nutrients, nutritional intake did not increase either.

While food-based welfare programs such as price subsidies enjoy certain advantages such as superior targeting, ease of administration, and political acceptability, the primary justification for choosing subsidies over other policy instruments is the presumption that they can be counted on to improve nutrition. If Giffen behavior, of the kind of observed in this study, is widespread, then policymakers may need to reconsider when food-based subsidies are appropriate.