Demand for Rainfall Insurance in India

Farmers in developing countries often rely on highly variable seasonal rains, which means that when droughts threaten, farmers may not generate enough income to support their families. Rainfall insurance can help to insure against unpredictable weather risk, but take-up is low. In the Indian states of Andhra Pradesh and Gujarat, researchers tested how demand for weather insurance responded to different marketing schemes and price discounts. They found that demand was very price sensitive, but that poor understanding of the product, distrust of insurance agents, and liquidity constraints also limited take-up.

Despite the gradual introduction of irrigation technology, agriculture in developing countries remains highly dependent on natural sources of water, meaning that farmers rely on erratic seasonal rains. Crop yields vary with rainfall, affecting the incomes of both farmers and agricultural laborers. When droughts threaten, they are often forced to borrow from relatives, friends, and neighbors. Informal risk-sharing arrangements are of limited value, however, because everyone engaged in agriculture in a given area is subject to the same productivity and revenue shocks from poor rainfall. Rainfall index insurance is an innovative financial product that may help reduce the risk associated with erratic seasonal rains, but take-up has been low. In this evaluation, researchers explored the barriers limiting the adoption of rainfall insurance.

The Indian states of Andhra Pradesh, in the southeast, and Gujarat, in the west, have large rural populations, drought-prone areas, and a high reliance on rain-fed agriculture. Gujarat is wealthier and more fertile than Andhra Pradesh. However, in this evaluation, the sample from Gujarat was poorer because it included agricultural laborers who did not own land, while the sample from Andhra Pradesh included only landowners. Roughly half of the Gujarat sample belonged to a scheduled caste or tribe, compared to about 12 percent of the Andhra Pradesh sample. In both samples, the average household size was about six people, average household savings were around Rs. 1,000 rupees (US$25.521 ), and 44 percent of land under cultivation was irrigated.

Rainfall index insurance is a fairly new financial product that attempts to insure against unpredictable and uncontrollable weather risk. Index insurance is generally sold in advance of the upcoming monsoon season. In this study, policies were sold in unit sizes as small as US$1, making the product accessible even to relatively poor households. Payouts were made based on rainfall recorded at a local weather station, with a maximum potential payout of Rs. 3,000 (US$76.56). In Andhra Pradesh, the rainfall insurance was sold by BASIX, a microfinance institution, and in Gujarat, the product was sold by SEWA, a local NGO. 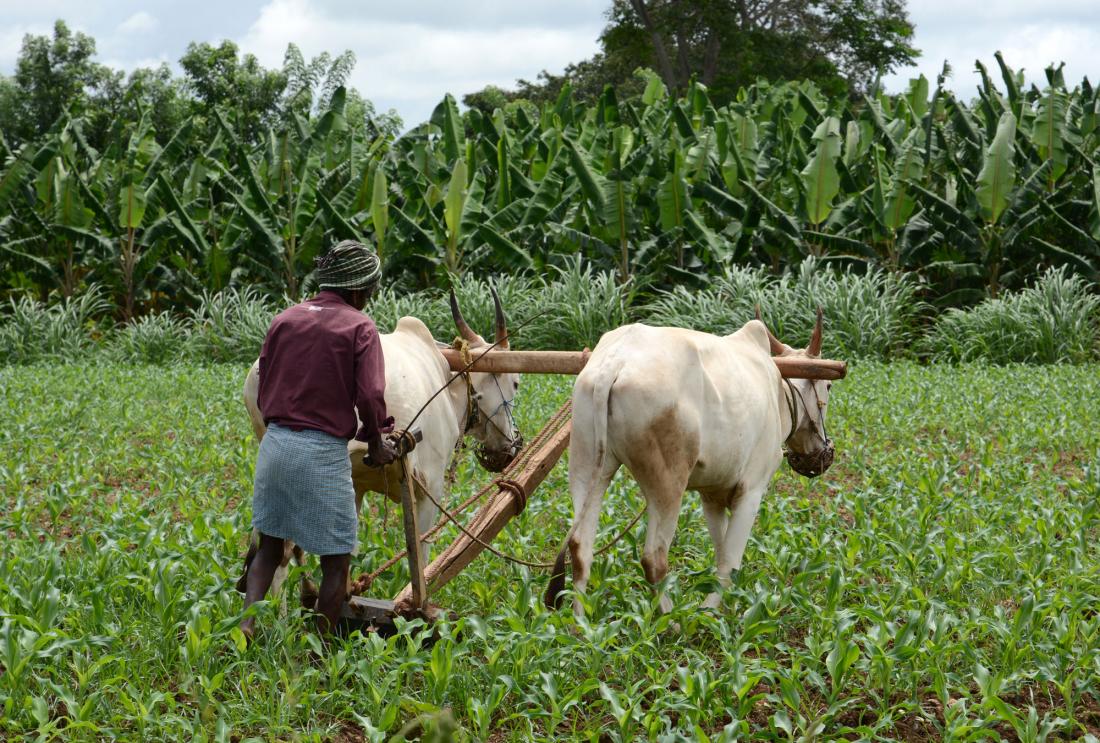 Andhra Pradesh: Before the 2006 monsoon season, 700 landowner households in 37 villages were randomly selected to be offered a rainfall insurance policy, and another 347 households were randomly assigned to the comparison group. Insurance salespeople successfully visited 660 households in the treatment group. During each visit, the insurance educator described the features of the rainfall insurance policy and answered any questions. Households could purchase insurance policies at that time or later. The exact content of the visits was randomized along three dimensions: (i) whether the educator was introduced by the locally known BASIX agent; (ii) whether the household received cash compensation of Rs. 25 or Rs. 100 (US$0.64 or US$2.25) after the visit, regardless of whether they made a purchase; and (iii) whether the educator provided additional education about how millimeters of rainfall convert into soil moisture.

Gujarat: In 2006, SEWA began offering rainfall insurance in 30 randomly selected villages. A year later, they began offering the same insurance product in 20 additional randomly selected villages. SEWA ran two different marketing campaigns in advance of the 2007 monsoon season. Households in the villages that had been offered insurance in 2006 received flyers with one of six randomly assigned messages. The flyers emphasized the benefits of insurance, with variations in wording to test the effect of emphasizing religion (Hindu, Muslim, or religiously neutral) and individual vs. group mentalities.

Households in the villages that were offered the insurance product for the first time in 2007 were randomly assigned to view a video. These video messages were randomized along four dimensions: (i) whether or not the prominence of the SEWA brand (SEWA was a well-known and well-respected NGO in the area) was emphasized; (ii) having a local farmer vs. a teacher endorse the product; (iii) presenting the probability of receiving a payout as a two in ten chance of receiving a payout vs. an eight in ten chance of receiving no payout; and (iv) emphasizing the safety of having insurance vs. the vulnerability of not having insurance. Households were also randomly assigned to receive a coupon for a discount of Rs. 5, Rs. 15, or Rs. 30 (US$0.14, US$0.41, or US$0.82) off the price of an insurance policy, which normally cost between Rs. 44 and Rs. 86 (US$1.20-2.34).

The results from both Gujarat and Andhra Pradesh showed that demand for rainfall insurance was price-sensitive, suggesting that high insurance prices contribute to low demand. Price reductions generated through greater efficiency, competition, or subsidies would significantly increase take-up, but given current take-up rates, price reductions alone would likely not be sufficient to generate widespread use of insurance. Non-price barriers, such as poor understanding of the product, distrust of insurance agents, and liquidity constraints also limited demand.

Andhra Pradesh: Among households that received a visit from an insurance educator, take-up of the rainfall insurance product increased by 11 percentage points, relative to the comparison group take-up rate of 28.2 percent. Receiving a large cash reward (Rs. 100) for participating in the survey increased take-up by approximately 40 percentage points. For households familiar with BASIX, the microfinance institution offering insurance, endorsement from the local BASIX agent increased take-up by about 10 percentage points relative to the comparison group, but the endorsement had no effect on households that were not already familiar with BASIX.

Gujarat: The average take-up rate among households that received any flyer was 23.8 percent. None of the flyer variations were distinguishable from each other in terms of their effect on take-up. However, the flyer that emphasized group mentality had a positive effect on take-up when combined with a neutral religious message, and a negative effect on take-up when combined with a Muslim religious setting. Together, these results suggest that emphasizing the shared benefits of insurance increased demand, but not if those cues emphasized group members different from the household.

Across households assigned to view one of the marketing videos, the average take-up rate was 29.4 percent. Emphasizing the SEWA brand had a positive effect on take-up when combined with a discount. None of the other variations on the video message had a significant effect on take-up. The size of the discount offered to households that viewed one of the videos mattered: a 10 percent discount in the insurance price increased the probability of purchase by about 3 percentage points (10 percent of the average take-up for all video treatments).

Rainfall in Gujarat was not low enough to trigger payouts in 2006 or 2007. However, there were payouts in subsequent years, and by analyzing SEWA’s insurance offerings from 2006 to 2013, researchers found that demand for insurance increased significantly when there were payouts in a household’s village in the previous year. A payout of Rs. 1,000 per policy increased the probability of purchasing insurance by 29 to 50 percentage points in the following year.