Diminishing the Effectiveness of Vote-buying in India

Vote-buying, a widespread electoral practice in many low- and middle-income countries, may undermine the accountability of elected officials, especially to the needs of low-income individuals. To diminish the effect of bribes on voter behavior, researchers designed and evaluated a non-partisan anti-vote-buying radio campaign during the 2014 Indian general election. Researchers assessed whether voters in areas that were randomly assigned to receive the radio campaign became less likely to vote for the reputed vote-buying parties. Researchers found that the radio campaign decreased the vote share of vote-buying parties by 3.5 to 7.1 percentage points.

Elections are designed to make political leaders accountable for their performance and responsive to citizen demands. The monitoring function of elections is particularly important in low- and middle-income countries, where formal watchdog institutions play a limited role. Vote-buying, the practice of bribing votes before elections, may constrain economic development through under-provision of public goods such as education, public health, and infrastructure. Further, since low-income individuals are the primary targets of vote-buying, it may also undercut their political voice. Vote-buying remains prevalent even though almost every country uses the secret ballot, which means that parties cannot ensure that the voters they pay off vote “correctly.” Vote-buying could still be effective in the presence of the secret ballot, however, if it appeals to voters’ intrinsic feelings of obligation to reciprocate a gift from a political party or candidate. Educating voters about the secrecy of their ballots may cause them to vote in line with their interests, regardless of whether they receive a payoff, thereby making vote-buying less effective. This evaluation is the first to test the effect of anti-vote-buying radio messages.

The 2014 India general elections to elect state assembly members and national Parliament members took place between April 10 and May 12; exact polling dates varied from place to place. Approximately 120,000 federal police were deployed during the election period to prevent the procurement and transportation of resources for vote-buying and to enforce other anti-vote-buying measures such as bans on liquor sales and surveillance of campaigning candidates. Despite these efforts, media observers leveled allegations of widespread vote-buying. Cash bribes reportedly ranged from Rs. 1000 to 2500 (US$17 to US$43 in 2014).

Though official rules prohibited campaigning in the 48 hours before polling began, researchers were permitted to broadcast non-partisan anti-vote-buying messages through All India Radio (AIR) stations during this time. AIR, also known as Akashvani, is the national public radio broadcaster of India. AIR’s transmissions covered 95 percent of the country by area and 99 percent by population. In comparison to other media sources, AIR had the highest audience reach in rural areas with high rates of poverty and illiteracy, which were also the areas most likely to experience vote-buying. 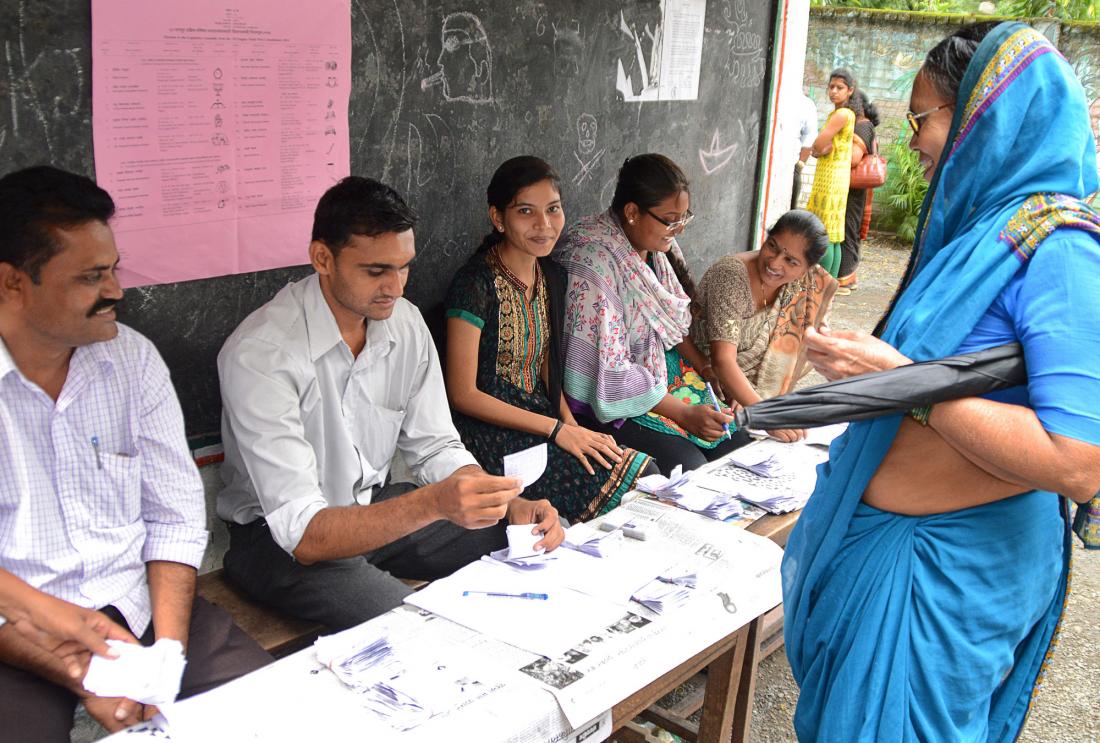 Researchers tested the effect of an anti-vote-buying radio campaign on voter turnout and the vote share of the top vote-buying parties. Researchers followed election outcomes in constituencies covered by 60 of AIR’s 194 radio stations in 10 states. They identified stations that served rural areas and broadcast in five languages that could be understood by the largest listener populations - Hindi, Kannada, Marathi, Odiya, or Telegu. Researchers randomly divided the 60 selected radio stations, which covered 67 percent of the country’s population and 62 percent of parliamentary constituencies, into two groups; one receiving broadcasts of the anti-vote-buying radio campaign, and one comparison group, which did not receive the broadcasts.

Researchers produced three 60-second radio ads in each of the five languages, which consisted of a satirical vignette about the hidden social costs of vote-buying. The vignettes portrayed the inconsistency between the vote-buyers’ election promises to provide public goods and their anticipated future corrupt behavior, and encouraged voters to choose an honest candidate.  Stations in the radio campaign group aired each of the three ads in the two days before the election and on the election day, when it was too late for party members to change their vote-buying strategy.

Since vote-buying is difficult to observe by outsiders who are unfamiliar with local politics, researchers interviewed over 400 local journalists in 10 states (including reporters for English, Hindi and local language newspapers, correspondents at national and state-level news channels, and freelancers) to determine which parties engaged in vote-buying.  Researchers then used official election returns to compare voter turnout and vote share for vote-buying parties in constituencies with and without the information broadcasts.

Voters in districts that received broadcasts of the information campaign were less likely to vote for vote-buying parties than those who did not receive broadcasts, but were no more or less likely to turn out to vote. Overall, the results suggest that messages informing voters about the incentives of vote buyers and the negative consequences of voting for them can be effective in deflecting electoral support away from vote-buying parties. At a total cost of US$750 per radio station, the campaigns also represent a cost-effective complement to other law enforcement efforts.

Voter turnout: The campaign did not have a significant effect on voter turnout, suggesting that voters responded to the ad by shifting their votes rather than by abstaining. There is no evidence that the campaign raised anti-incumbent or anti-establishment sentiments, supporting the argument that the campaign led to changes in voter attitudes towards vote-buying parties.

Researchers estimated that 78 voters were persuaded to vote for non-vote-buying parties per US$1 spent, making the radio campaign cost effective compared to more expensive and potentially dangerous on-the-ground campaigns such as door-to-door canvassing.