Borrowers categorized as subprime, or financially risky, are generally seen as heavily reliant on debt and, consequently, as vulnerable to interest rate increases. Researchers studied the effects of a credit card interest rate increase among low-income subprime borrowers in the UK to assess its impact on credit card demand, overall indebtedness, and borrowers’ ability to pay. They found that following the rate hike, subprime borrowers who appeared to be more financially stable reduced their demand for new credit by 42 percent more than their counterparts who did not receive the rate increase. Overall, borrowers did not reduce their indebtedness and incurred higher interest charges, resulting in higher revenues for the lender and a larger debt burden for borrowers.

Subprime borrowers are individuals who, given their poor credit history, mainstream banks consider to have a higher risk of failing to repay their loans than the typical individual. These borrowers can depend heavily on debt due to a lack of other financial resources. Interest rate increases may deal a heavy blow to such individuals if they are indeed too financially constrained to be able to stop borrowing, trapping them in debt and further lowering their income.

In higher-income countries like the UK, where this study takes place, lenders have sufficient information about borrowers to determine their risk and charge interest rates accordingly, levying higher rates on more risky borrowers.

In the UK credit card debt is widespread, representing approximately 30 percent of consumer credit in 2007. Financially vulnerable people are not excluded from the credit market: lenders have enough information about their clients to offer credit, at high interest rates, to high-risk individuals. High-risk individuals tend to be on the lower end of the income distribution.

Most subprime borrowers do not pay their entire credit card balance each month, incurring interest rate charges on a regular basis: 81 percent of individuals in this study had outstanding credit card debt every month during a six-month period.

Consequently, interest rate increases targeted at such financially vulnerable clients can potentially have large impacts on their financial stability, making them less likely to be able to pay off debt. 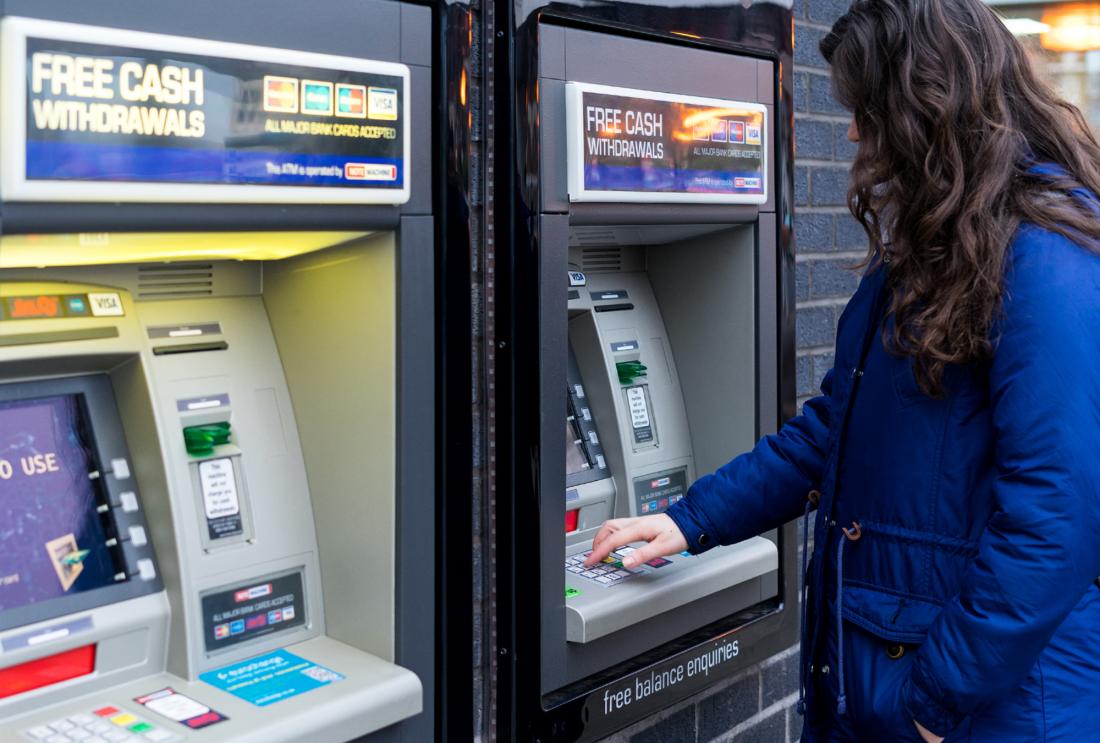 A young adult woman withdraws cash from an ATM machine in the UK. Photo: nrqemi | Shutterstock.com

Researchers had access to data from one such rate increase of 5 percentage points, which took place between February and May 2008 and incorporated 39,883 clients. Analyzing this data allowed the researchers to determine the causal short-term impact of the rate hike on subprime borrowers, and to study whether the rate hike impacted different types of subprime borrowers in different ways.

The interest rate hike of 5 percentage points led to a decrease in credit demand among subprime borrowers who appeared to be more financially stable, compared to similar borrowers who did not receive the rate increase. On the other hand, borrowers who appeared to be less financially stable did not reduce their demand for credit despite its increase in cost, and some of them became more indebted as a result. Borrowers’ overall ability to pay did not change in the short term, and the lender’s revenues increased throughout the course of the intervention.

When examining impacts on different types of subprime borrowers, researchers found that only individuals with characteristics reflective of more financial stability– that is, lower-risk users able to pay off larger amounts of their debts every month – reduced their demand for credit following the interest rate hike. While these borrowers lowered their monthly borrowing by £30.54 (US$60.21) following the rate hike, similar borrowers who did not receive the hike reduced their borrowing by £21.50 (US$42.39), a 42 percent difference. In contrast, other types of subprime borrowers – those less apparent financial stability– did not significantly decrease their credit card borrowing.

Indebtedness: There is some evidence of borrowers trying to limit their debt by reducing new transactions and paying off more credit card debt in response to the rate hike. However, in part because higher interest charges added to borrowers’ overall debt, those who received the rate hike did not significantly reduce their overall debt on average relative to those who did not receive the hike.

Some subprime borrowers who appeared to be less financially stable when the rate hike took place actually increased their debt by £71.1 on average (US$140.18) compared to similar borrowers who did not receive the rate hike, resulting in 8.5 percent more debt after three months.

Ability to pay: Over a period of three months, subprime borrowers who received the rate hike were no more likely to default on their debt than their counterparts. However, this may not be long enough to explore the effect of the rate hike on borrowers’ ability to pay their loans, as it takes six months for the lender to assess whether a debt is likely to be repaid.

Lender’s revenues: The lender’s revenues increased over the three-month study period. Overall, individuals who received the rate hike paid an additional £6 on average (US$11.83) on interest charges during this time compared to those who didn’t receive the rate hike, equivalent to an 8 percent increase.

These results suggest that subprime borrowers may not be able to reduce their demand for new credit when interest rates rise, and that rate increases can increase borrowers’ interest rate payments and overall indebtedness.

With this in mind, policies that seek to protect such financially vulnerable individuals should be of important consideration to policymakers. This is particularly true in low-income contexts in which high-risk individuals depend heavily on borrowing for financial stability.