Child marriage, when one or more spouses are below the age of 18, is correlated with negative outcomes around the world. Girls who marry early are more likely to be socially isolated, have early and high-risk pregnancies, and experience intimate partner violence. Child marriage has also been found to reduce schooling attainment. While many countries have instituted laws to prohibit marriage for individuals under the age of 18, child marriage remains the norm in many countries in South Asia and Sub-Saharan Africa. Between 2011 and 2020, 142 million girls are projected to become child brides in developing countries.1

Previous research has found that encouraging girls to stay in school can reduce child marriage, but this approach fails to reach girls out of school, who are often the most vulnerable. Improving girls’ abilities to negotiate through empowerment or skills training may be a more inclusive approach, but little evidence exists on the effectiveness of such interventions. In contexts where parents are heavily involved in marriage decisions, an alternative approach may be to provide incentives to parents that are conditional on delaying their daughters’ marriages. Can an adolescent empowerment program, a conditional incentive program, or a combination of the two reduce child marriage, reduce teenage childbearing, and increase educational attainment?

Bangladesh has the second-highest child marriage rate in the world. In 2014, 74 percent of women aged 20-49 had been married before age 18.2 In the same year, 31 percent of all 15-to-19-year-olds had already given birth or were pregnant.3 Parents are highly involved in the matchmaking process, and dowries, though illegal, are common.4

This study took place in communities in five rural sub-districts of southern Bangladesh where Save the Children was managing a food security program for pregnant and lactating mothers. The conditional incentive program in this study used Save the Children’s existing program infrastructure in these communities to deliver cooking oil to eligible girls. 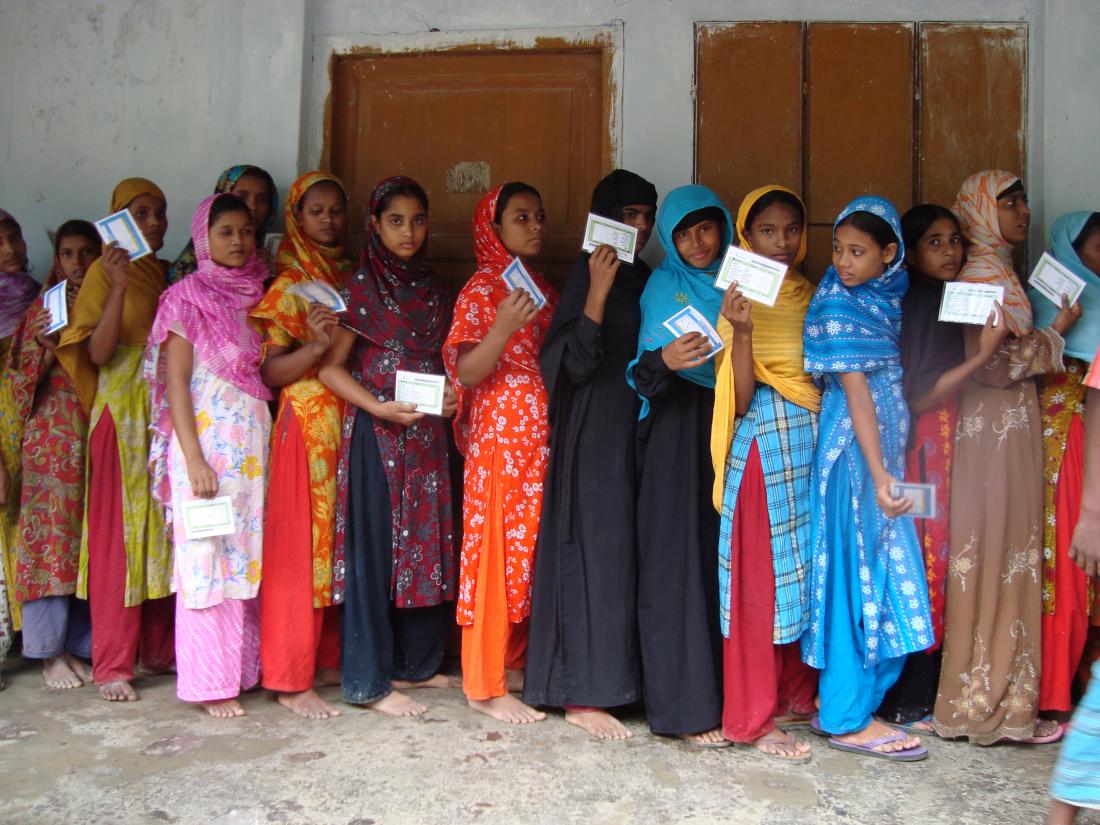 In partnership with the Bangladesh Development Society and Save the Children, researchers conducted a large-scale randomized evaluation to test the impact of an incentive program for delayed marriage and an adolescent girls’ empowerment program on child marriage, teenage childbearing, and education. The sample of 438 communities, which included a total of 15,739 girls aged fifteen through seventeen, were randomly assigned to four different groups: one group was assigned to the empowerment program, another to the incentive program, a third to both programs, and the fourth to a comparison group which received neither.

The adolescent empowerment program was called Kishoree Kontha, or “Adolescent Girl’s Voice,” and was one of the largest adolescent empowerment programs ever implemented in the developing world. Communities with Kishoree Kontha identified meeting places (called “Safe Spaces”) where girls could meet five to six days a week to socialize and receive educational support and social competency training. The social competency training included training on life skills and nutritional and reproductive health knowledge. In half of the empowerment communities, the program also included financial literacy training. Each Safe Space targeted twenty girls for a six-month cycle of the program, repeating again with a new group of girls each cycle until the entire community had been reached.

The conditional incentive program delivered cooking oil to families with unmarried girls aged fifteen through seventeen (eighteen is the legal age of consent). Community volunteers distributed ration cards to these girls at the start of the program. Every four months between April 2008 and August 2010, girls who remained unmarried could collect cooking oil by presenting their ration cards to community volunteers at a distribution point in the community, who would then confirm the girls’ marital status with other community members. The value of the oil was approximately US$16 per year, an amount chosen to offset the amount by which dowry is estimated to increase for every additional year a girl remains unmarried.

More than four years after the programs ended, researchers conducted a follow-up study of all girls who had been unmarried and between the ages of fifteen and seventeen at the outset. Parents were asked about daughters’ current marital status, childbearing history, and school enrollment.

Taken together, these results suggest that a conditional incentive for families of adolescent girls can lead to substantial reductions in child marriage and teenage childbearing in a setting with high rates of underage marriage. Unlike incentives conditional on schooling, which only focus on girls in schools, this incentive program conditional on marriage had positive effects on out-of-school girls as well. Moreover, this evaluation demonstrates that an incentive conditional on marriage (instead of education) can still have positive effects on educational attainment for girls in school. This program was highly cost-effective. Researchers estimate that every US$1,000 spent on the program by the implementer led to 6.6 years of delayed marriage, 1.5 averted child marriages, and 3.6 additional years of schooling. They also conducted a cost-benefit analysis and found that the program generated US$1,070 in net present value for every US$1,000 invested by the implementer and beneficiaries.

While the empowerment program did not lead to significant changes in child marriage or teenage childbearing during the time period evaluated in this study, it did increase schooling outcomes, with significantly more women from empowerment communities still in school in their early twenties. It is still early to know the full effects of the program, which may lead to improved reproductive health outcomes or marital bargaining power later in life. In addition, empowerment programs may be more effective in settings where girls have more control over their marriage choices.