Identifying the Effects of Working while in School in Uruguay

In 2017, the global youth unemployment rate was three times higher than that of adults. Working while studying has the potential to improve youth skills and employability, but might also deter students from reaping the full benefits of education if they have less time available for studying. Researchers partnered with the government of Uruguay to evaluate the impact of offering youth a first job experience while attending school. The program increased both participants’ earnings and school enrollment, and earnings were still higher four years after the program. The participants’ work experience accounted for the improved earnings.

As of 2017, the global youth unemployment rate was 13 percent, three times higher than the adult unemployment rate. Working while studying might help alleviate this problem for several reasons. For one, part-time work experience may help youth acquire new skills and demonstrate to employers that they are motivated. Furthermore, the income from this work experience could support youth to pursue their studies. However, working while in school could also take time away from studying, negatively impacting school learning and post-graduation career paths. While some governments have proactively tried to discourage youth from working while studying, others encouraged students to take job opportunities while they study.

The existing evidence on the effect of working while studying on earnings and education outcomes is limited and inconclusive. Should students work while they are enrolled in school?

Despite economic growth and improved labor market conditions in Uruguay since 2004, unemployment rates have remained significantly higher for youth than for the average population – respectively 18.52 percent against 6.45 percent in 2012.

In its efforts to curb youth unemployment, to reduce school dropout, and to tighten the link between education and the labor market, the Ministry of Labor and Social Security of Uruguay established in 2012 a work-study program, “Yo Estudio y Trabajo” (YET). The YET program provides youth aged 16 to 20 who are enrolled in school with a first clerical job experience in a state-owned enterprise that does not prevent them from attending school. More than a third of the total eligible population throughout the country applied to the program its first year, confirming youth’s willingness to work and study at the same time. Researchers found that the applicants’ socio-economic backgrounds are similar to those of the total eligible population. 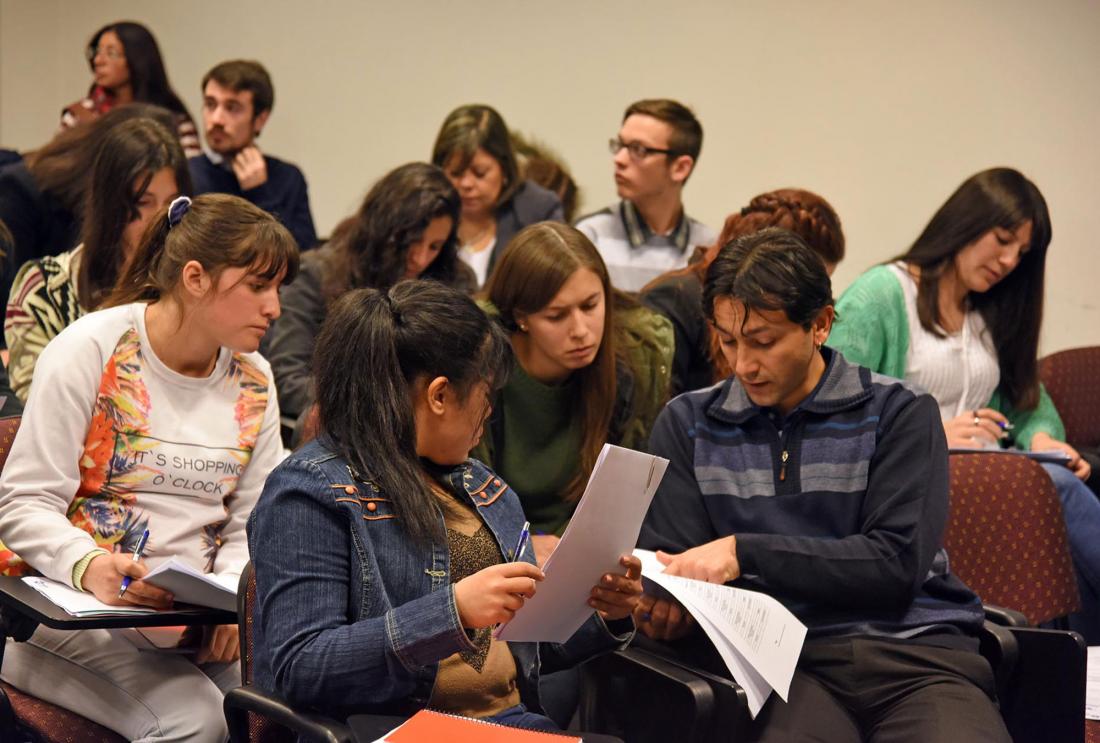 Researchers conducted a randomized evaluation to test the impact of a work-study program on participants’ earnings and education outcomes.

Once a year, participants to the YET program are selected through a lottery held in almost all the main cities in Uruguay. Of the 122,195 youth who applied to the first three years of the program, when the evaluation was conducted, 2,829 randomly-assigned youth were offered a position. Firms partner with localities to publicize the positions they would like to make available for the program. Firms are not able to choose their candidates; rather, program administrators match participants to the available job positions. Most firms choose to participate in the program for the flexibility of short-term contracts and to strengthen their relationships with the central administration. Program participants are offered a job that is compatible with school attendance. They attend a two-day orientation workshop and are assigned a supervisor who follows their progress in the program. Upon completion of the full contract over a period of nine to twelve months, participants receive a work certificate.

Researchers used social security and school enrollment administrative data to measure the applicants’ monthly earnings and school enrollment during the program and up to four years after program completion. In addition, they gathered survey data to measure participants’ program experience, their time use, the skills gained, and their school grades.

Impact on earnings: The yearly earnings of youth who completed the program were more than three times that of the comparison group during the program, by an additional US$2,001. This improvement in earnings lasted: their yearly earnings improved over time to an additional US$1,113 four years after program completion, representing a 22 percent increase over the comparison group. The program increased monthly wages by 5 percent (or US$26), on average over the four post-program years, suggesting that gaining work experience through the program increased young people's productivity.

Impact on education: Program youth comply with the program requirement of school enrollment and attendance. During the program year, youth who completed the program were 12 percentage points more likely to be enrolled in school than youth in the comparison group, who had a 76 percent school enrollment. The program effects persisted after the program year. After four years it increased school enrollment by 2 percentage points on average relative to the comparison group, thanks to stronger enrollment in secondary education. Researchers suggest that this might be partially motivated by a higher expected return to education. Working while studying did not have negative effects on school performance. Even though enrolled students reduced study time, this reduction was not large enough to affect grades. Youth took time away from leisure and household chores and spent more time working.

The Government of Uruguay has used evaluation results as evidence that the YET program is effective. In addition, the Ministry of Labor and Social Security is considering further evaluation of the program to understand its impact on the interactions between the youth and their parents.

Thomas Le Barbanchon, Diego Ubfal, and Federico Araya. “The Effects of Working while in School: Evidence from Uruguayan Lotteries.” Working Paper, May 2019.