Globally, 30 percent of women experience physical and/or sexual violence by an intimate partner (IPV) in their lifetime. Among other challenges, IPV is associated with various negative health consequences, including increased risk of HIV transmission, substance use, and depression. Researchers evaluated the effect of a gender-transformative skills-building program on IPV incidence, HIV risk behaviors, and other health outcomes in rural Ethiopia. Overall, the program led to reductions in IPV when delivered to groups of men, but not when delivered to couples or to women only. Further, across all groups, the program increased support for gender equitable norms, increased equity in intrahousehold decision-making, and reduced HIV risk behaviors.

Globally, 30 percent of women experience physical and/or sexual violence by an intimate partner (IPV) in their lifetime. 1 The well-documented health consequences of IPV include injuries, unintended pregnancies, sexually transmitted infections, long-lasting effects on mental health, and, in the most extreme cases, death. 2 IPV survivors are also subject to economic and social costs, such as reductions in income and social stigma. 3 Over the past decade, researchers and practitioners have been increasingly dedicated to designing and evaluating programs focused on preventing IPV and its impacts.

Social norms reinforcing gender inequalities are considered key drivers of both IPV and HIV transmission as they reduce women’s ability to seek protection from abuse and negotiate safe sexual relationships. Group-based participatory education interventions aimed at reducing IPV by addressing gender and social norms have shown promise when targeted to women, but there is limited evidence on how these interventions may work when targeted to men or couples. Can a community-based gender-transformative participatory intervention delivered to men, women, or couples effectively build more gender equitable attitudes and behaviors? If yes, will these changes lead to reductions in IPV and improve related health outcomes?

In 2005, Ethiopia reported the highest prevalence of IPV in any of the 10 countries surveyed by the World Health Organization  as part of their multi-country study on women’s health and domestic violence. In rural Ethiopia, where this study took place, 49 percent of ever-partnered women had experienced physical violence by a partner at some point in their lives, and about 60 percent had experienced sexual violence. 4 This put women in Ethiopia at greater risk of contracting HIV as evidence suggests there is a higher prevalence of risky sexual behavior among male perpetrators of IPV. The HIV prevalence among Ethiopian men is 0.6 percent and 1.2 percent among women, but HIV knowledge levels are low.

In Ethiopia, the  coffee ceremony is an integral part of social and cultural life, as well as a forum for discussions and conflict resolution. This culturally established forum provides an ideal setting for implementing an interactive gender training program in between rounds of serving coffee. Furthermore, since traditionally, women prepare coffee during a ceremony lasting several hours, there is also an opportunity to model and promote more gender-equitable behaviors by asking all participants, regardless of gender, to take turns preparing the coffee. 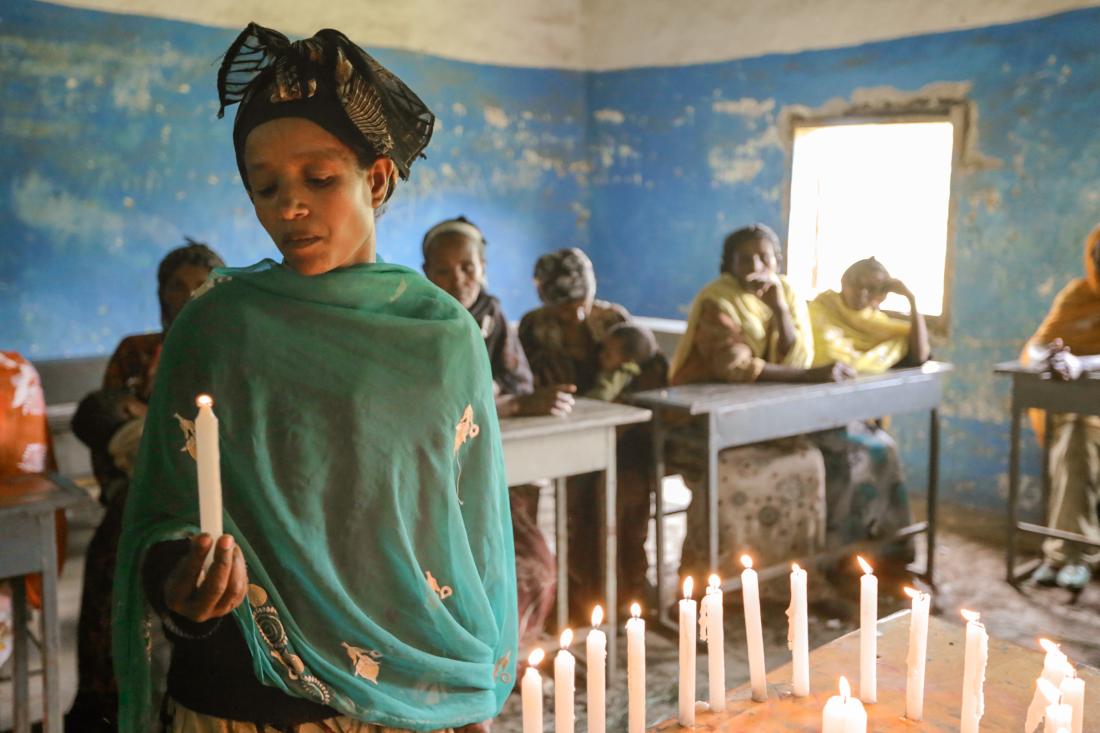 Researchers partnered with EngenderHealth, Addis Ababa University, and the Ethiopian Public Health Association to design and evaluate a gender-transformative training program aimed at preventing intimate partner violence and other health related issues, such as HIV transmission. Unite for a Better Life (UBL) is a participatory group program involving skills-building sessions that are delivered during Ethiopian coffee ceremonies.

The research team identified 64 villages in southern Ethiopia to receive the program. Villages were randomly assigned to four different groups of the same size:

This allowed researchers to compare the relative effectiveness of UBL when delivered to women only, to men only, or to couples. A total of 6,770 randomly selected households enrolled in the study.

The UBL sessions focused on identifying and transforming power imbalances and building skills for healthy, non-violent, and equitable relationships. Each session focused on a different topic, such as gender norms, power dynamics, consent, and HIV prevention using interactive activities, group discussions, and modeling behavior within the coffee ceremony. The twice-weekly sessions involved groups of about twenty people each, totaling 38 hours across fourteen meetings. Facilitators had gone through the UBL program themselves and received a 10-day facilitator training.

Researchers collected data on experience or perpetration of IPV in the past year, HIV knowledge and behaviors, gender norms, household decision-making and task-sharing, male use of substances (alcohol and khat), and women’s reported depressive symptoms. Baseline surveys took place between December 2014 and March 2015, before the start of the intervention, and the follow-up surveys occurred two years after the intervention, in 2017 and 2018. Researchers also surveyed households in treatment villages who were enrolled in the evaluation, but randomly selected as treatment non-participants, in order to assess potential spillover effects of UBL.

The UBL intervention reduced past-year IPV when delivered to groups of men only, but not when delivered to couples or to women only. At the same time, support for gender equitable norms and men’s involvement in household tasks increased across all groups, and both men and women showed improvements in a range of HIV-related behaviors.

The UBL program reduced IPV when delivered to groups of men: Sexual IPV declined as a result of the program, but only in communities where the men’s UBL program was implemented. In this group, the odds of women reporting experiences of sexual IPV in the past year declined by 20 percent while the odds of men reporting perpetrating sexual IPV declined by 27 percent, both relative to individuals in the comparison group. For participants who attended at least 12 of the 14 UBL sessions, the men’s UBL group reduced the odds of perpetrating sexual IPV in the past year by almost 50 percent.   Regarding physical IPV, there was no effect of the intervention on women’s experience or men’s perpetration of physical IPV in the past year across any of the UBL groups on average. However, participants who attended at least 12 of the 14 men’s UBL group sessions reported perpetrating less physical IPV.

The UBL program led to more equitable relationships: Support for gender equitable norms increased among participants in all three groups.   Participants also reported an increase in men’s involvement in childcare and household tasks. In the couples’ and men’s UBL group, the results suggest that household decision-making may have become more equitable as men (but not women) were less likely to report that men dominate decisions over large purchases, spending time with family or friends, or other matters. Both men and women in the men’s UBL group also reported improved knowledge of IPV laws.

The UBL program also improved HIV-related knowledge and behaviors: Overall, women reported increases in HIV knowledge and were more likely to report using a condom at their last sexual intercourse. Men’s comprehensive HIV knowledge did not increase in any group and neither did their condom usage. However, men across all groups were more likely to discuss HIV risks with their partner, while men in the couples’ and men’s UBL groups reported being more confident in their ability to use a condom. Men in the couples’ UBL group were also 48 percent more likely to have been tested for HIV than men in the comparison group.

The UBL program had limited impacts on substance use and symptoms of depression. When evaluating women’s reports of their spouses’ substance use habits, researchers found no impact of the program on alcohol or khat use, and related problems, in the past year.   However, men in the couples’ UBL group were less likely to report being frequently intoxicated by alcohol in the past year and more likely to report frequently using khat in the past year. Meanwhile, women did not report any change in symptoms of depression except in the women’s UBL group, among which symptoms of moderate depression were 54 percent higher than in the comparison group. This may reflect a change in reporting patterns rather than actual depressive symptoms: after completing the program, women may have become more comfortable reporting their depressive symptoms.

Taken together, these results suggest that male engagement is critical for the success of IPV interventions such as UBL, especially when programs are embedded in local traditions. Further research is needed to understand the mechanisms through which gender transformative norms can lead to reductions in IPV, as well as how these programs can influence mental health related outcomes.

Drawing on learnings from the two UBL adaptations above, researchers are compiling lessons on how to effectively adapt IPV interventions to new contexts. The researchers are planning to adapt UBL to new contexts in Southeast Asia and the Caribbean, and are exploring further randomized evaluations and long-term follow-ups to build on their existing work.

Further, UN Women and WHO recommended the UBL program to policymakers as an effective, evidence-backed program in their resource guide RESPECT Women: Preventing Violence Against Women – Implementation Package. This resource is intended to summarize the global evidence on effective ways to reduce violence against women and provide practical guidance on how these programs can be adopted. A comprehensive summary of the UBL program and its implementation was featured in the resource to encourage national and subnational policymakers to carry out the program.