Approximately 1.1 billion people worldwide practice open defecation. This leads to preventable fecal-borne diseases such as diarrhea and intestinal worms, which in turn can lead to malnutrition and impaired physical growth. Researchers conducted a randomized evaluation to study the impact of a large-scale Community-Led Total Sanitation (CLTS) program in Indonesia on sanitation practices, attitudes towards open defecation, and child health. When implemented by external resource agencies instead of local governments, CLTS increased toilet construction, reduced roundworm infestations among children under five, and decreased tolerance of open defecation. CLTS did not impact other measures of child health and was not effective among poorer households or in communities with lower levels of community participation.

Approximately 1.1 billion people worldwide practice open defecation due to a lack of sanitation facilities, leading to preventable fecal-borne diseases such as diarrhea and intestinal worms. By reducing food consumption, diarrhea and intestinal worms can also cause malnutrition, which can result in impaired physical growth and long-term gastrointestinal disorders. As a potential solution, governments and international actors have developed Community-Led Total Sanitation (CLTS) programs to address the issue of inadequate sanitation. CLTS programs aim to change community norms around sanitation, which can lead to higher demand for toilets and reduce open defecation. Does CLTS change attitudes around open defecation, increase demand for sanitation, and improve child health outcomes?

CLTS was initially developed in 1999 and is now widely implemented in more than sixty countries. CLTS aims to create sustainable demand for sanitation through facilitated community discussions on the health risks of open defecation and community-led development of subsequent sanitation action plans. CLTS facilitators aim to introduce a feeling of shame about open defecation during the discussions to strongly motivate behavior change and investment in sanitation facilities. This contrasts with the traditional approach of directly providing sanitation facilities to households to reduce open defecation.

CLTS facilitators initiate community-led discussions and activities related to the health risks of open defecation. Communities participate in the facilitated meetings and then create their own plans to improve village sanitation with little follow-up support or monitoring from facilitators. Discussions are held in public places and are open to all. They involve a “walk of shame” during which facilitators help the community analyze how fecal contamination spreads to their living environments, food, and drinking water. A map of the village is drawn on the ground and community members are asked where they live and defecate, to illustrate how members are ingesting small amounts of feces.

An estimated 110 million Indonesians lack access to proper sanitation and 63 million practice open defecation. Approximately 11 percent of Indonesian children have diarrhea during any two-week period, and an estimated 33,000 children die each year from diarrhea. To address the dangers of fecal-borne diseases linked to poor sanitation, Indonesia has made CLTS part of its national plan for improving environmental and health outcomes in rural areas. Starting in 2008, CLTS was rolled out in rural areas of East Java, one of Indonesia’s most populous provinces with roughly 38 million residents. 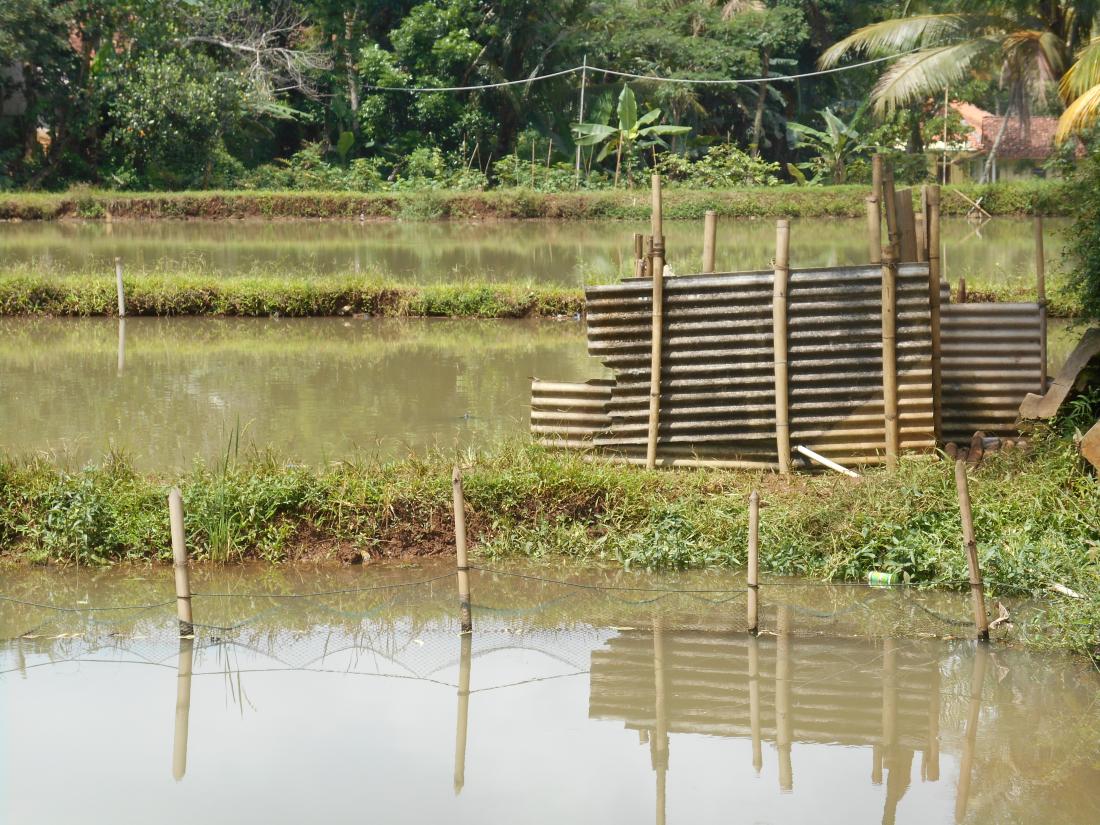 In partnership with the Water and Sanitation Program of the World Bank, researchers conducted a large-scale randomized evaluation to measure the impact of CLTS on toilet construction, attitudes towards open defecation, knowledge of the causes of diarrhea, and child health. Within rural areas of East Java, 160 villages in eight districts (roughly 2,000 households) were randomly assigned either to receive the CLTS program (80 villages) or to a comparison group that did not receive CLTS (80 villages).

Beginning in 2010, two years after implementation, researchers collected data on sanitation practices, attitudes towards open defecation, and health indicators among children under five, including roundworm prevalence, anemia, height, and weight. While the implementing organization was not randomly assigned across villages, researchers compared the impacts of the program in villages where the external resource agency implemented CLTS to villages with local government implementation.

Overall, CLTS modestly increased the rate of toilet construction, reduced community tolerance of open defecation, and reduced worm infestations.  CLTS did not, however, have an impact on other measures of child health, including anemia, height, or weight. The program was less effective among the poorest households who did not have the financial resources to construct toilets; in communities with lower levels of community participation; and when implemented by a local government, compared to a resource agency.

Sanitation knowledge and attitudes: CLTS slightly decreased tolerance of open defecation and did not increase knowledge on the causes of diarrhea—potentially due to knowledge already being high. Although CLTS did not trigger substantial attitude change in communities, it did create demand for sanitation: toilet construction increased by 2.4 percentage points (19 percent) in CLTS communities, compared to 12.5 percent of the comparison group.

CLTS increased toilet construction in villages with already high levels of community participation, particularly among wealthier households in communities where CLTS was implemented by a resource agency. A one standard deviation increase in community participation levels before the intervention was associated with an 11.3 percent point (188 percent) increase in the probability that a household built a toilet.

Child health: Among young children (aged 0-5 years) in CLTS villages, roundworm infestation decreased by 46 percent compared to the comparison group. Despite the decrease in roundworm prevalence, researchers did not find improvements in anemia, weight, or height for children under five.

Implementing organization: CLTS had a positive impact in communities where the intervention was implemented by resource agencies. While the implementing organization was not randomly assigned to communities, toilet construction mostly occurred in villages where resource agencies, rather than local government, implemented the program. Resource agencies were more likely to engage with village health officers, officials, and midwives, conducting 0.42 more visits to villages. Respondents in these communities were 13 percentage points more likely to have heard about the program.

Informed by the finding that the program was less effective among low-income households, the World Bank conducted another study to investigate whether the provision of financial incentives—subsidies for poorer households and community rewards—alongside CLTS increased toilet construction by poorer households. In collaboration with the World Bank, J-PAL affiliated professor Lisa Cameron led a research team that conducted a randomized evaluation of these incentives in Lao PDR.1

In a separate paper, researchers pooled data from various countries that were treated with CLTS (Indonesia, India, Mali, and Tanzania) and have learned that the amount of sanitation coverage matters in order to impact child height.2 They suggest that this might be one of the reasons that studies often find that sanitation interventions do not increase child height. They further suggest that a minimum level of sanitation coverage is needed for this to occur.

Cameron, Lisa, Susan Olivia, and Manisha Shah. 2019. "Scaling up Sanitation: Evidence from an RCT in Indonesia." Journal of Development Economics, 138: 1-16.