In rural Bangladesh, women living in extreme poverty face barriers to engaging in work that provides higher returns, such as livestock rearing. Researchers partnered with BRAC to evaluate their multi-faceted livelihood program known as the Graduation Approach, which aims to encourage occupational change among these women. The Graduation Approach enabled women living in extreme poverty to shift away from seasonal casual wage labor and into livestock rearing, leading to an increase in earnings and a reduction in extreme poverty. These results show that supporting households to enter higher return work can help them transition out of poverty.

People living in extreme poverty face barriers to accessing the capital or skills required to take on high-return work, restricting their occupational choices to low-skilled, low-paying wage labor activities that may be irregular and seasonal in nature. Providing people the materials and skills to engage in higher-income occupations may provide a path out of poverty. Can enabling “ultra-poor” women—those living on less than US$0.70 per day1—to take on the same work activities as higher-income women in their communities set them on a sustainable trajectory out of poverty?

While Bangladesh has seen significant progress in poverty reduction and human development in the last few decades, nearly 25 percent of the population in 2005 lived on less than US$1.90 per day.2 In an effort to meet the needs of this population, BRAC, an international development organization based in Bangladesh, launched the Graduation Approach in the country’s thirteen poorest districts in 2002. The program provides women from the poorest households with a productive asset transfer, technical skills training in their choice of business activities, home visits by program staff, consumption and health support, and encouragement to save. As of 2014, seven years after the start of the evaluation, the Graduation program had reached 1.2 million individuals in over 360,000 of the poorest households in the country and had been tested in several other countries.

Among the study participants for this evaluation, 93 percent of eligible women were illiterate, 41 percent were the sole earner in their household, and 53 percent lived in households below the US$1.25 per day poverty line. Less than 10 percent of study participants owned cows, goats, or land. Study participants also spent considerably more time working as daily agricultural laborers or domestic maids and less time on livestock rearing, which was more common among higher-income women. 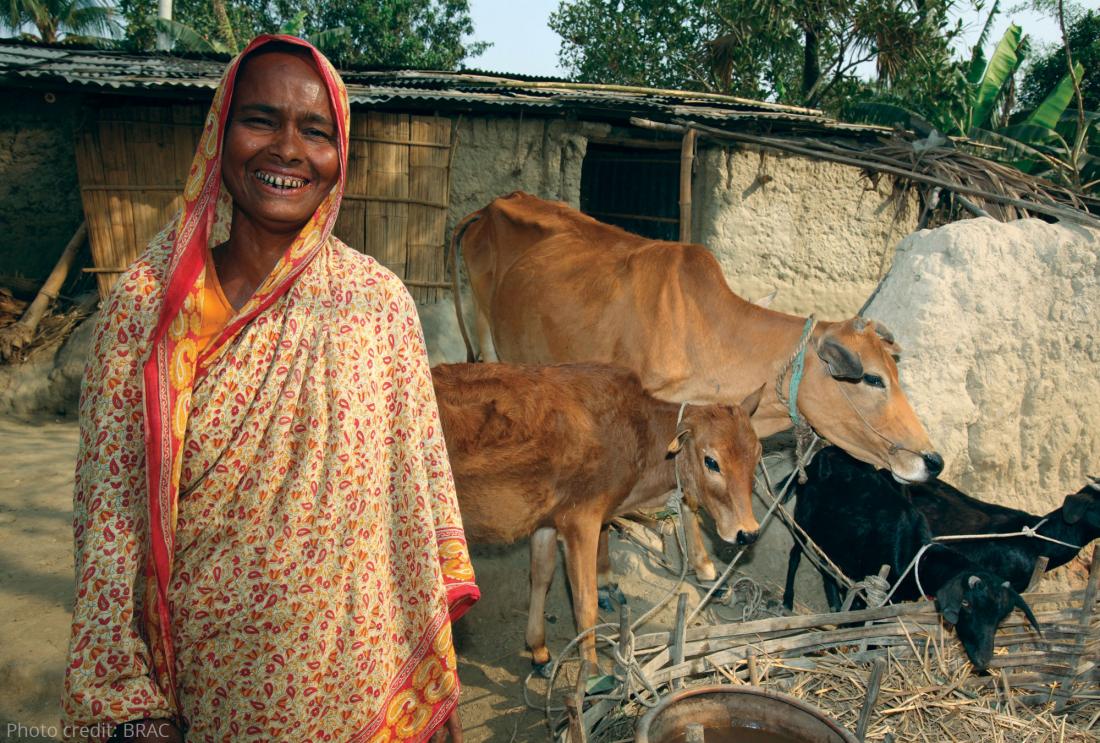 In collaboration with BRAC, researchers conducted a randomized evaluation to examine the impact of the Graduation Approach on women’s labor market activities and earnings. From forty BRAC branches serving 1,309 villages, researchers randomly assigned half of those branches to a treatment group that received the program in 2007 and half to a comparison group that received the program starting in 2011.

BRAC identified women eligible for the program through a participatory wealth ranking process where community members classified households into different wealth categories. Implementers further divided households in the lowest wealth category into two groups: 1) ultra-poor households that met additional Graduation eligibility criteria (e.g., the household had an able adult woman present and was not receiving transfers from government antipoverty programs) and received the program, and 2) near-poor households that did not meet these criteria.

The Graduation program offered women a choice of an asset bundle that could be used for an income-generating activity, such as livestock or those relevant for small-scale retail operations. Each bundle was worth about US$560 on average, nearly double eligible households' initial wealth. Second, the program also offered a package of training and support to ensure that women were successful in taking on the new work activities. All of the eligible women in the study chose some combination of livestock and most selected at least one cow. The training on livestock was specifically designed to help women maintain livestock health, maximize livestock productivity, learn strategies for breeding, and bring produce to market.

Third, the program provided consumption support to beneficiary women for the first 40 weeks after the asset transfer as women adjusted to the new work activities. Finally, the program included an offer of health support, training on participants’ social and political rights, and encouragement to join savings schemes offered through BRAC.

To understand the impact of enabling low-income women to take on the same work activities as higher-income women in their villages, researchers surveyed all “ultra-poor” and “near-poor” households, as well as a 10 percent random sample of households from higher-income groups. Researchers conducted the surveys before the start of the program and two, four, and seven years later to collect information on all labor activities for each household member during the previous year.

The bundled asset and skills transfer of the Graduation Approach enabled women to engage in livestock rearing and work more hours, leading to a reduction in poverty and an increase in household earnings, consumption, and assets.

The shift in work activities from casual labor to livestock rearing led to increased earnings, consumption, and assets. Among women assigned to receive the Graduation program, earnings from livestock rearing increased from US$80 to US$115 two to four years after the intervention, suggesting that women were becoming more productive in this activity over time. Additionally, wage rates for maid services and agricultural labor of eligible women in Graduation villages increased four years after the intervention due to the decline in labor supplied for these activities. Together, these changes yielded an increase of 21 percent in annual earnings among Graduation households four years after the program began, or an increase of US$88 from the comparison group average of US$411.

Spending on consumption also increased: eligible women in Graduation villages increased per capita consumption spending by 11 percent after four years or a US$63 increase from the comparison group average of US$576. Additionally, the share of households below the US$1.25 poverty line after four years decreased from 62 percent to 54 percent. The Graduation program also improved financial inclusion, as eligible women reported higher levels of savings, borrowing, and lending. Eligible women living in Graduation villages were also more likely to own land after four years, and the value of their landholdings was higher. Finally, survey results from seven years after the intervention suggest that the positive impacts of the Graduation program on consumption and assets were sustained over the long term.

Taken together, these results show that very low-income women were able and willing to take on the same labor activities as their wealthier counterparts, but faced barriers to do so. The Graduation program, a one-off transfer of assets and skills, removed these barriers and led to sustainable poverty reduction. A cost-benefit analysis conducted by researchers showed that the Graduation program was highly cost-effective; the average benefits were 3.21 times larger than the costs.

These results align with other evaluations of the Graduation program in six other countries, suggesting that reducing poverty through occupational change can be effective in different contexts.

Based on the results of this study, several implementing organizations across the world have replicated the Graduation program. The approach has been scaled up by BRAC to over 580,000 women in Bangladesh and by Bandhan Konnagar to 60,000 women in India. In total, the Graduation Approach has been adapted to support a transition to sustainable livelihoods for ultra-poor families in about twenty countries.3

6 result(s)
BRAC releases guidebook for organizations working to end extreme poverty
An end in sight for ultra poverty
The ultra-poor: a pioneering technique is helping the hardest to reach
Happiness Up, Poverty Down
Micro Credit Alone 'Can't change ultra poor's fate'
Not by Asset Alone