Leveraging Referrals to Improve Targeting for Agricultural Training in Bangladesh

To address low adoption rates of agricultural technologies, effective training programs need to target individuals who would benefit the most from them. Researchers tested whether referrals by past trainees—both with and without incentives—improved the effectiveness of an agricultural training. Overall, the training increased adoption rates and improved agricultural performance. Referred farmers were only slightly more likely to adopt than those randomly selected, while rewarding or incentivizing referrals did not improve the quality of the referred farmer and may have led those ill-suited to the technology to adopt it.

Organizations that provide training programs are often unable to identify who will benefit most from the training. Agricultural extension services are commonly used to increase the take-up of new and potentially beneficial agricultural technologies. These programs typically rely on a small number of model farmers who receive training to spread information on the new technology throughout their community. However, efforts to introduce new technologies to farmers are often mistargeted, leading to limited adoption, wasted resources, and a loss of credibility to organizations that provide the trainings. Can local farmers better identify those who will benefit the most from the training, especially when incentivized?

In addition to being a staple food in Bangladesh, rice also has economic, social, political, and cultural importance. In 2016, rice accounted for 70 percent of dietary calories, 56 percent of total protein intake, 50 percent of the agricultural gross domestic product, and 50 percent of rural employment in Bangladesh.1 Increasing the productivity and profitability of rice will help meet the needs of Bangladesh’s growing population and shrinking availability of land.


System of Rice Intensification (SRI) is one approach to rice cultivation to increase yields without requiring farmers to purchase additional inputs. SRI involves changing how farmer plants rice seedlings along with altering water and soil conditions to enhance how rice grows. Bangladesh is particularly suitable for this method given the prevalence of rice cultivation and abundance of labor. However, not all farmers are suited to this approach since SRI requires careful management, more time, increased labor, detailed knowledge, and strong organizational skills. Targeting SRI training to more suitable farmers may improve cost-effectiveness, but agencies that provide the training rarely have enough information to target effectively. In rural Bangladesh, farmers may be better at identifying well suited farmers in their own communities. If receiving compensation, farmers may also put more effort into identifying well suited farmers and ensuring they fully adopt SRI.

The households in this study owned on average over 1.6 acres of cultivable land, had 4 years of education, and included 5 members within the household, 3 of which were of working age. 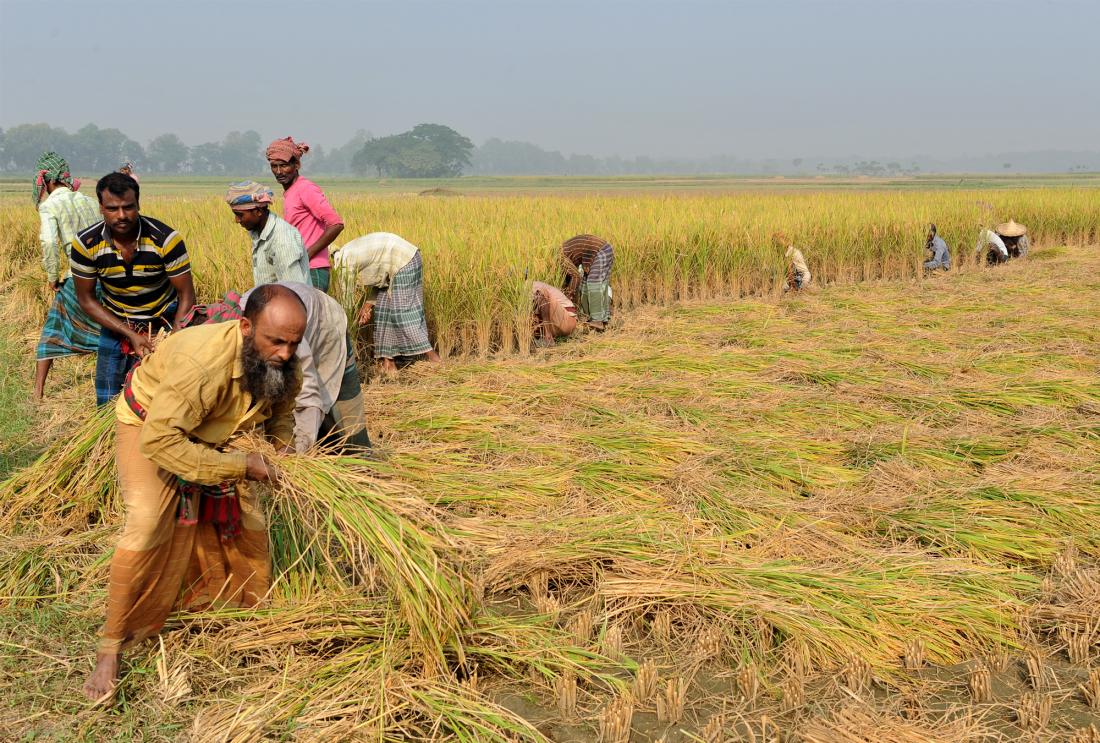 In collaboration with BRAC, a large non-profit organization based in Bangladesh, researchers evaluated the impact of referrals for an SRI training on how well farmers were able to identify other suitable farmers to adopt SRI practices, and if offering incentives for referrals increased adoption. BRAC identified 182 villages across five districts that were suitable for the SRI training based on feasibility of cultivation and whether farmers were already practicing SRI. Researchers randomly selected approximately 30-35 farmers in each village to receive the training from list of all farmers who could potentially adopt SRI based on current farming practices. The villages were then randomly assigned to four groups:

Before the harvest season, BRAC designed and administrated the day-long SRI training program that included multimedia presentations and tested farmers’ SRI knowledge at the end. Trainees also received BDT 300 (USD 3.57) for their participation, slightly more than the daily agricultural wage.

For the first round of training, researchers randomly invited half of the farmers from the list, after which the trained farmers referred another farmer from those remaining on the list. Once a farmer selected a name from the list, it was removed, so fewer choices remained for each subsequent farmer. Referred farmers received the training a week after the first round of training.

In addition to the training, researchers conducted household surveys of training participants, gathered information on agricultural production, and asked participants about social ties to other farmers in the village. After the harvesting season, researchers returned to the villages to assess if farmers adopted SRI via surveys and field visits.

While the training increased the likelihood of adoption along with agricultural performance, referrals only slightly improved targeting. Offering incentives for referrals did not improve referral quality and negatively affected crop performance on average.

Referrals only slightly improved the targeting of farmers likely to adopt SRI: Referred farmers were only 4 percentage points more likely to adopt SRI than randomly selected farmers, whose likelihood of adoption was between 38 and 49 percent. While farmers tended to refer people within their social network, they were less likely to do so when they were choosing from a larger pool of potential referees. They also resorted to referring friends and family when more appropriate trainees were no longer in the pool of potential farmers to refer.

Incentivizing referrals did not impact the quality of referrals: SRI adoption rates were similar across villages where farmers referred another farmer, both with and without incentives. This suggests that rewarding or incentivizing referrals did not improve targeting or the quality of referred trainees on average. However, with more limited choices of potential referrals, farmers that received compensation appeared to select better quality farmers than those who did not receive compensation.

Farmers who were compensated for their referrals had higher SRI adoption rates themselves, but also experienced worse crop performance: Villages where farmers received compensation for their referrals were up to 12 percentage points (32 percent) more likely to adopt SRI above the 37 percent of villages where farmers were not compensated. Financial incentives may have made adoption more convincing or heightened interest in the training. In the case in which compensation was conditional on the referred farmer adopting, the referring farmers may have also coordinated adoption with their referred farmer in order to receive the compensation. Yet, incentivizing referrals also encouraged adoption by farmers ill-suited for SRI, who had lower performance, often adopted incomplete techniques, and reverted back to original practices over time.

Taken together, these results suggest that incentives for referrals can be useful to increase adoption. However, if the ultimate goal is to improve performance, policymakers should exercise caution when incentivizing trainee referrals for targeting.