In Chile, formally employed workers are required to contribute 10 percent of their taxable income to a pension account (referred to as mandatory contributions). Individuals can also make voluntary contributions into tax-advantaged accounts, in addition to their mandatory contributions. However, take-up of such accounts is low. Only 22 percent of individuals with mandatory pension accounts also held accounts for voluntary contributions. Furthermore, levels of financial literacy are lower in Chile than in other high-income countries. A 2009 survey indicated that most members of the Chilean national pension system could not correctly answer simple questions about compound interest, risk and, inflation. Eighty-two percent of Chileans that were surveyed did not know how their pension would be calculated, and many who claimed to know were unable to answer questions about the topic when asked. Correct response rates were lower for women and respondents with lower levels income and education.

In Chile, the Superintendencia de Pensiones (SdP) created an online pension simulator that provides workers with a personalized forecast of the payouts they would receive at retirement, based on their age, gender, retirement contribution amount, retirement age, income, and more. However, use of the simulator is low due to its complexity, especially among individuals with lower wages and savings. The participants of this evaluation were more knowledgeable than average Chileans but still had low financial literacy. Overall, the gender balance, wage distribution, and savings behavior of the participants were nearly identical to those of the actual makeup of the pension system, of which around 67 percent are women, 33 percent have completed secondary education, and 19 percent have at least some tertiary education. 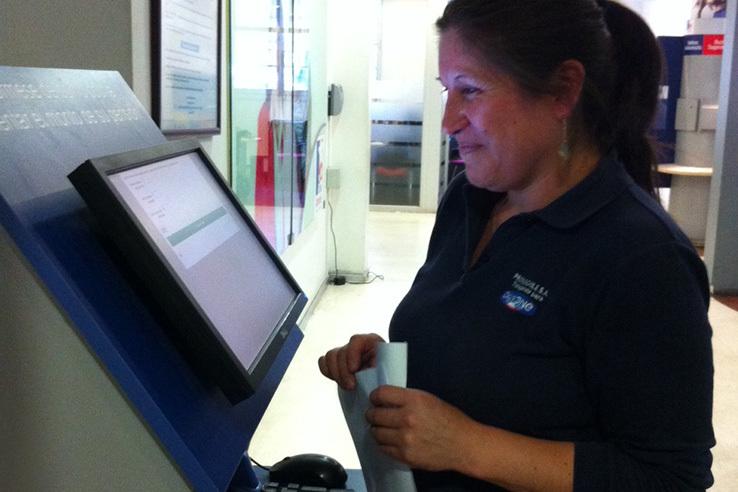 A participant uses a pension simulation kiosk installed in one of the Chile Atiende offices
Fuentes et al., 2022

Researchers partnered with the SdP in Chile to evaluate the impact of providing personalized retirement savings information on long-term savings by simplifying and facilitating access to the existing pension simulator.

The modified simulator showed users a personalized projection of their post-retirement finances, and users could then change parameters to see how their eventual pension payout would be impacted by three suggestions:

In contrast to the previous online version, the simplified version assumes that users will follow a default investment strategy as determined by their age. It also reports online a single average value for the user’s annual payout amount, as opposed to a range of values.

The research team installed self-service kiosks equipped with this simplified pension simulation software in eight locations with high populations of low- to middle-income working individuals. The kiosks were specifically placed in eight Chile Atiende offices which deliver social payments and services on behalf of the government. At the kiosk, participants completed a baseline survey that collected information about their current earnings, education, and beliefs about the importance of retirement savings, which was used to personalize the pension simulation. Researchers also collected information about the kiosk users’ financial knowledge. Then, each participant was randomly assigned into one of two groups:

By collecting participants’ expected pension payouts prior to the simulation, the researchers were able to personalize the simulation and investigate whether participants updated their prior beliefs about their pension savings adequacy. For example, participants who discovered from the projection that their expectations were overly optimistic might have responded by increasing their savings. Researchers used government-provided administrative data and a phone survey to measure impacts on labor force participation and savings behavior ten months later.

The research team noted that it may be the case that not everybody wants to save for retirement, which would be a relevant consideration in the design of strategies to increase savings.

Additionally, the research team designed a way for individuals to be able to access their own pension estimate in a regular computer without them having to open an account with SdP. This required the use of the Chilean ID card and a fingerprint, which became a severe barrier to participation because individuals did not know how to position these elements correctly. As a result, the research team enlisted the assistance of monitors to ensure that individuals could fully participate.

People who received personalized information increased their voluntary contributions by 1.5 percentage points from a base of 4.7 percentage points (a 30 percent increase) over the first year. Individuals saved more in the first month after using the kiosks, but by nine to eleven months after the intervention, there was no significant increase in savings for the average participant. Additionally, personalized information did not significantly impact the average number of mandatory contributions, which implies that workers did not change their labor supply, formal employment, or taxable income in response to the intervention. When summing the voluntary and mandatory contributions, there were also no significant increases in total savings for the average participant. These results suggest that personalized information may be an effective tool in the short term to increase savings for retirement.

However, the impacts varied across different groups. For example, users who had previously overestimated their pension payout (i.e., those who were told by the simulator that their payout would be less than they had expected) increased their voluntary contributions. Likewise, those who underestimated their payouts decreased their mandatory contributions by lowering their labor supply, formal employment, or taxable income. This difference suggests that the impact of providing personalized information appears to have been mostly because it allowed participants to update their beliefs about the annuity payoffs they would receive and that, even after thirty years of existence, a system of defined contribution still shows signs of knowledge gaps that can be filled.