As climate change threatens to make natural resources like water increasingly scarce, using natural resources efficiently and sustainably is an important policy issue. Researchers conducted two randomized evaluations in Bangladesh to study the impact of a new irrigation method and different pricing schemes on water use and conservation. The new irrigation method reduced water consumption and costs for farmers who were already paying for water by the hour, or by volume. Encouraging farmers to shift to paying hourly pumping charges increased their demand for the new technology, but did not conserve water.

As climate change progresses, one important policy priority is how to use natural resources more efficiently and sustainably. Experts anticipate that water will become increasingly scarce as populations grow and temperatures rise. Agriculture is a key place to look for more efficient ways to use water, as it accounts for almost 70 percent of all the water consumed globally.

In many countries, farmers pay fixed charges to access water for an entire growing season, and the price they pay is unrelated to how much water they use. Farmers may want to reduce water use when higher water consumption comes with a higher price tag, while farmers paying a fixed price irrespective of their water consumption may lean towards water overuse. However, there is little evidence on how the price of irrigation affects conservation practices and water use. Can charging farmers based on the amount of water they use encourage them to practice more efficient irrigation methods and conserve water?

This study took place among farmers in three different districts of Bangladesh: Mymensingh, Rangpur, and Rajshahi. Farmers participating in the study predominantly plant two rice crops — one in the rainy season and another in the dry season. Rain is rare during the dry season, so farmers water their crops to cultivate rice. Farmers irrigate their land about twenty times during the dry season. Farmers participating in the study have about six years of education on average, and hold around two acres of land.

There is considerable variation in the way water is priced in the three districts. In Rajshahi and Rangpur, groundwater is deeper and more costly to reach, and water infrastructure is usually government-owned. In Rajshahi, farmers pay for water either for each hour of pumping or by volume, and can pay for water used using a prepaid card. In Rangpur, farmers pay a per-acre fee for the right to irrigate their field for the entire season. In Mymensingh, water infrastructure is privately owned as groundwater is easier to reach. Farmers in Mymensingh usually pay for water per acre irrigated. Most farmers do not possess their own prepaid card and pay a fixed per acre fee instead.

This evaluation involves measuring use of a technology designed to save water in rice farming. The technology is a perforated plastic pipe, open at both ends, that is planted in a rice field to help the farmer irrigate only when the crop needs water. Using this pipe to schedule irrigations is referred to as Alternate Wetting and Drying (AWD). AWD has been around for several decades but it is not widely adopted, despite its simplicity and potential to reduce water use by about 30 percent. Prior to the study, only about 17 percent of participating farmers had heard of AWD and nobody was using the technology at the beginning of this evaluation. 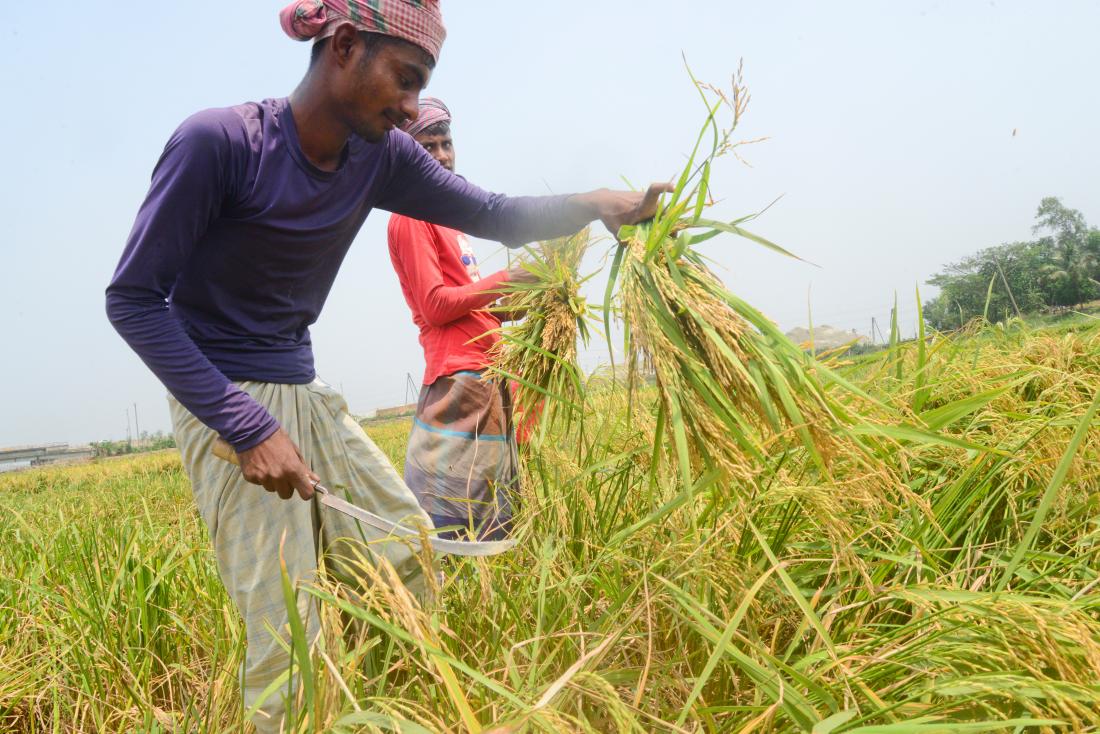 Across the three districts, Mymensingh, Rangpur, and Rajshahi, researchers randomly assigned a total of 400 villages to one of two groups prior to the start of the dry season:

1. Alternate Wetting and Drying (AWD): In half of the villages, ten farmers per village were identified who owned plots of land suitable for AWD. Implementing staff visited these villages within 10 days after farmers had planted their rice, between January and March 2017. The ten farmers received training on the purpose of AWD and how to use it. Farmers also received instructions on the precise timing of when to practice AWD during the season. After the training, each farmer received an AWD pipe and help with installing it.

2. Comparison Group: Half of the villages stayed with the status quo and did not receive additional information or support to set up AWD.

Researchers carried out a second evaluation to test whether demand for AWD changes when farmers are encouraged to adopt hourly irrigation pricing. Farmers at baseline were paying a tube well operator a fixed amount per season for irrigation water, despite each village having a metered tube well where water could be purchased by the hour with prepaid debit cards. Researchers carried out an encouragement design where a local NGO intervened to make it easier for farmers to adopt prepaid debit cards. Researchers tested whether this encouragement changes demand for AWD and results in decreased water usage.

A total of 144 villages were randomly divided into two groups:

1. Hourly pricing: Farmers in a total of 96 villages were encouraged to use individual prepaid cards to purchase water by the hour, rather than by paying fixed seasonal charges. A local NGO helped each farmer fill out the application form for the prepaid card, paid the application fee of BDT 150 (around US$1.80 at the time of study), and delivered the farmer’s irrigation card after it had been printed by the local government authority.

2. Comparison group: A total of 48 villages served as the comparison group that retained the status quo of seasonal charges. Each of the 1,200 farmers in this group received BDT 150 of mobile phone credit — an amount equal to the application fee for the prepaid card.

To understand whether hourly pricing changes demand for AWD, sales representatives visited all 144 villages to give farmers the opportunity to purchase AWD equipment at a randomly determined, discounted price between BDT 20-90 (US$ 0.24 – 1.08). This corresponded to between 5 and 25 percent of the daily wage for agricultural work in the area.

Water Conservation: Farmers were more likely to use AWD when they lived in an area where they paid depending on how much water they used. When there was volumetric pricing, offering farmers the new AWD technology led to a 17.3 percentage point increase in the occurrence of dry fields (a sign of water conservation) – a 54 percent increase relative to the comparison group. In contrast, when farmers were already paying a fixed price regardless of how much water they used, offering them AWD had no impact on the occurrence of dry fields.

Prepaid Card Use: In the second randomized evaluation, many farmers chose not to use the prepaid card and preferred fixed seasonal charges. While the majority of farmers (95 percent) who were offered help getting an hourly debit card indeed went through the process to get a card, only about 40 percent ever used the card at least once. The research team suggests that there may have been other obstacles that made offering a switch to paying by volume of water used ineffective at conserving water – for example, inefficiencies in local water distribution networks.

Farmers’ Willingness to Pay: Farmers encouraged to adopt the hourly cards were willing to purchase AWD technology at higher prices: farmers with prepaid cards were more willing to purchase AWD pipes priced at BDT 60 (US$0.72 at the time of study) or higher: Hourly pricing increased farmers’ pipe purchases by 35 percent relative to the comparison group. There were no differences in AWD uptake at the four lowest prices offered by researchers (BDT 50 and below).

Water Use: The prepaid card encouragement did not lower water usage. Researchers found that many farmers did not follow through and use the AWD pipes that were purchased in the second experiment. In this case, an encouragement to adopt hourly pricing had modest effects on demand for AWD, but was not enough to generate water savings.

While AWD can be an effective technological solution to conserve water, it only worked when farmers paid for water either by the hour or by volume. But more research is needed to understand obstacles to adopting hourly or volumetric water pricing in places where they do not exist.

Based on the evaluation results, researcher are now working on with the Barind Multipurpose Development Authority (BMDA) to use administrative data to support the targeting of AWD. This way, researchers will use the data to identify villages with high usage rates of prepaid irrigation cards and target AWD trainings to areas where the technology is likely to have the greatest impact on water conservation.