As of 2022, over 100 million people worldwide were forcibly displaced due to conflict, violence, human right violations, and persecution.1  Among the forcibly displaced were refugees whose mental health was declining due to adverse life experiences. Poor mental health among caregivers, such as mothers, can lead to neglect of childcare, adversely affecting child development. In addition to poor mental health, resource and healthcare shortages in refugee camps in low- and middle-income countries can negatively impact physical health. Low-cost and scalable programs that can simultaneously address the concerns of mental health and early childhood development of refugees are critical, but there is a dearth of evidence on the impacts of these types of programs in post-conflict settings. Can an intervention bundling education, support, and play-based learning for mothers and children address this need and improve the psychological well-being of mothers and the development of their children?

The Rohingya people, an ethnic, linguistic, and religious minority, from Myanmar (previously Burma) have been persecuted and forcibly displaced since 1948. In 2017, the Burmese military forced about 750,000 Rohingya from Myanmar into neighboring Bangladesh. Among the one million refugees in Cox’s Bazar at the time of the study, 55 percent were children and 52 percent were female. Many of the children in the refugee camps were malnourished and suffered from severe mental distress, while over 80 percent of Rohingya women reported depressive and emotional distress symptoms, and 60 percent had post-traumatic stress disorders. Additionally, the legal status of Rohingya refugees in Bangladesh impeded their social inclusion, employment, or mobility out of camps, causing further mental toll. 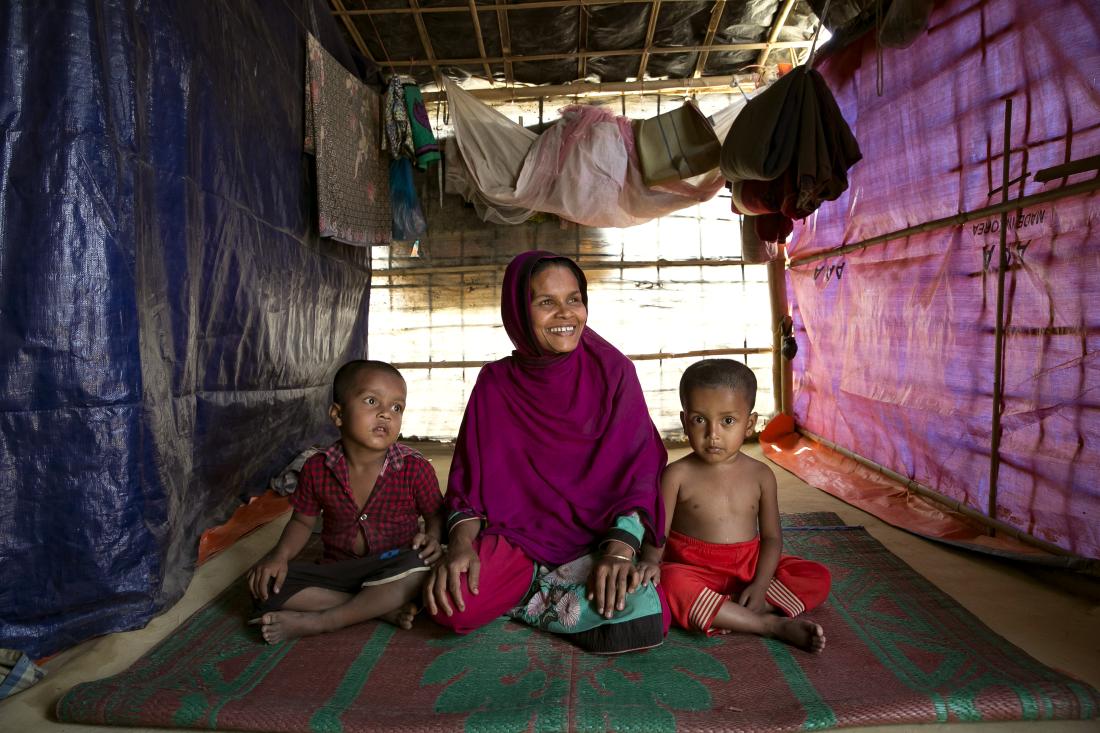 Researchers worked with BRAC Bangladesh to implement a home-based program called the Humanitarian Play Lab (HPL) that comprised 44 weekly sessions delivered by female Rohingya volunteers. These 60-minute weekly sessions consisted of psychoeducation, parenting support to mothers, and play activities for mothers and children. The researchers conducted a randomized evaluation to test the impact of this support program on the mental well-being of refugee mothers and the growth and development of their children under the age of two.

Researchers randomly selected 251 blocks or neighborhoods within refugee camps in Cox’s Bazar. Project assistants and volunteers randomly visited households that met selection criteria – mothers with at least one child between the age of 46 days and 24 months – and invited them to participate, resulting in a total of 3,499 mother-child dyads in either the intervention group or the comparison group. Participants in the comparison group did not receive the program but still attended unstructured weekly social gatherings.

The evaluation began in September 2019, prior to the start of the program, by collecting socioeconomic background, mothers’ characteristics, adverse life experiences of children, and children’s anthropometric data. Weekly HPL sessions commenced in October 2019 and ran through September 2020 with a pause due to Covid-19 from late March to mid-May 2020. A follow-up survey was conducted in October 2020 to collect data on outcome and mechanism variables.

Five mother and ten child outcomes were measured including mental health outcomes, subjective well-being of mothers, children’s socioemotional, cognitive, and physical development, and child anthropometrics. Mental health was measured based on self-report of psychological trauma and depression while subjective well-being was measured based on self-report of happiness, aspirations, and sense of belonging. All outcomes, other than anthropometrics, were measured as indices aggregating different indicators.

In addition to receiving ethical review and approvals from an institutional review board, researchers made an effort to address and account for the privacy and confidentiality of participants by ensuring enumerators received specific training on cultural respectfulness and on interacting with participants that might have experienced trauma in the process of forced displacement.

Impact on Children
Mental Health: Children experienced improvements in both trauma and depression severity with 0.10 SD and 0.12 SD reductions respectively relative to the comparison.
Socioemotional, Physical, and Cognitive Development: Researchers observed improvement in skills development with increases in communication skills by 0.23 SD, gross-motor skills by 0.18 SD, problem-solving skills by 0.18 SD, and social skills by 0.13 SD. There was no effect on fine-motor skills.
Anthropometrics: To determine the impact on child malnutrition researchers estimated the intervention’s effects on children’s stunting.2  The program reduced the prevalence of stunting by seven percentage points from 69 percent in the comparison group to 62 percent in the program group. It also increased child height by 1.58 centimeters (a 19 percent improvement) from an average of 80.5 centimeters in the comparison group to 82.08 centimeters in the program group.  Impacts were greater for those with more intense malnutrition, as the reduction in being severely stunted was 22 percent.

Additionally, given HPL’s peer delivery model and low cost –US$45 per dyad per year – this intervention may provide a scalable option for low- and middle-income countries hosting refugees where resources may be limited and costly child development approaches may not be available or prioritized.

The intervention is being gradually scaled up in refugee camps in Bangladesh by BRAC with over 17,000 mother-child dyads currently benefiting from it. Given the humanitarian situation, the mother-child dyads in the comparison group are also receiving psychosocial support as part of scale up.

2.
Undernutrition, a form of malnutrition, encompasses wasting, stunting, and underweight. (“Malnutrition,” World Health Organization, 2021, https://www.who.int/news-room/fact-sheets/detail/malnutrition.) Z-scores are often used to compare children’s undernutrition with a refence population. They describe how far, in standard deviations, a child’s height is from the median value of a child in the reference population. (World Health Organization, WHO Global Database on Child Growth and Malnutrition, Geneva: WHO, 1997) https://www.who.int/teams/nutrition-and-food-safety/databases/nutgrowthdb.) Due to Covid-19 pandemic restrictions, the researchers could only collect and validate the heights of children at the endline, and the remaining two pre-registered outcomes, underweight and wasting, had to be dropped from the analysis. Therefore, the researchers only looked at the height-for age z-scores, where a low score corresponds to stunted growth.