Reducing Anemia Through Iron Fortification of Grain in Udaipur, India

Iron deficiency anemia is prevalent in the low- and middle-income countries, and has been linked to low productivity in adults, slower cognitive and physical growth among children, and susceptibility to infection. Researchers in Udaipur, India, evaluated the impact of a village-level iron fortification program on the physical health of local families in 134 villages. Despite high take-up rates at the beginning of the study, overall take-up rates fell by the end of the evaluation. Results showed a significant difference in anemia rate and physical health between the treatment and comparison group when program take-up was high, but no difference when it was low.

Iron deficiency anemia (IDA) is prevalent in low- and middle-income countries, and has been linked to low productivity in adults and slower cognitive and physical growth among children. It also increases susceptibility to infection, and the likelihood of experiencing weakness or fatigue symptoms. Among pregnant women, severe anemia can result in low birth weight and child mortality. Medical literature has established a relationship between iron supplementation and productivity, but few people are willing to take iron pills on a regular basis. In addition, only a few randomized evaluations have looked at the impact of IDA on actual health and economic outcomes.

Over 40 percent of households in the tribal villages in Udaipur district, Rajasthan, live below the poverty line and disease is widespread. An extensive health survey conducted in 100 villages in 2003 found that anemia was a significant problem in Udaipur. Men were almost as likely (51 percent) to be anemic as women (56 percent) and older women were not less anemic than younger women. This suggests diet was a key factor.1 Anemia status is correlated with other measures of health such as the ability to walk long distances, draw water from a well or work in the fields. There is also a correlation between anemia and economic well-being: higher instances of anemia are associated with lower household income.

In resource-poor settings, systematic distribution of iron supplemented pills is an impractical policy, and even when distribution is not a problem, it is hard to get people to take iron pills regularly. Iron supplementation of food is an attractive alternative: it requires no additional effort on the part of the consumer, and can be done relatively cheaply in centralized locations. For isolated populations, such as the population in rural Udaipur, wheat would have to be fortified locally as most households only consume their own grain. 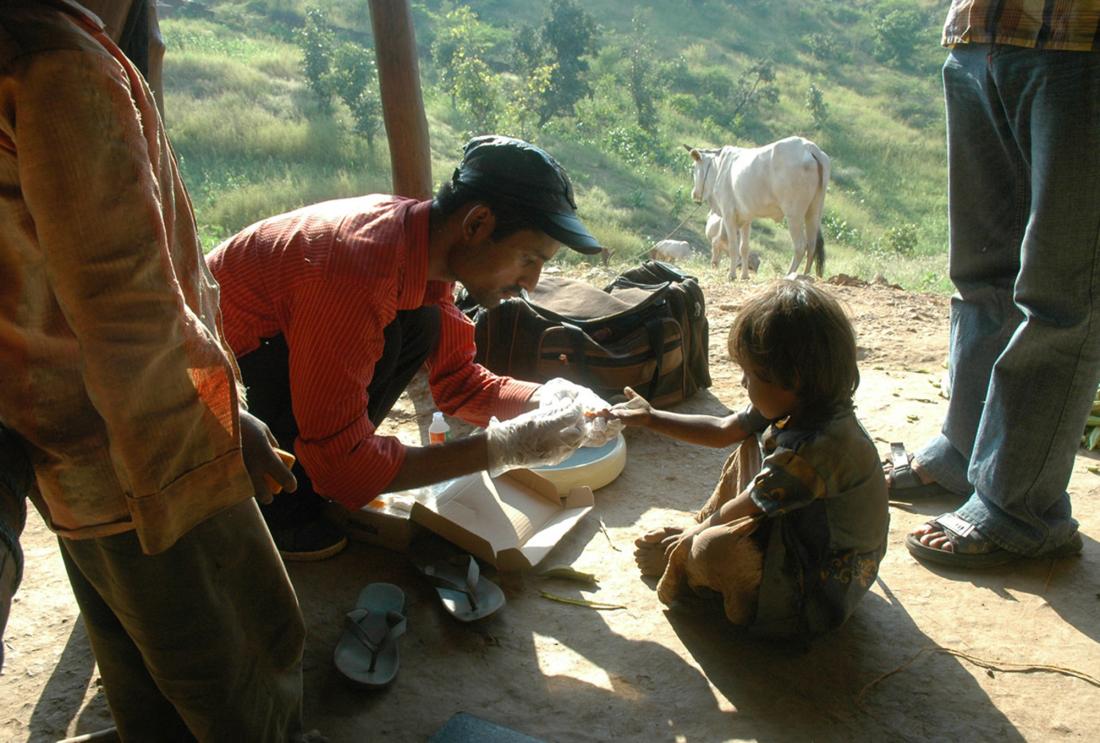 A young boy gets his hemoglobin measured in Udaipur, India

The community-level iron fortification program was designed by an NGO, Seva Mandir, to provide an option for iron supplementation for families who do not buy commercially processed grain. The program was implemented in 68 of 134 villages, with the remainder serving as comparison. On average, each village had four chakkis (local millers), of which up to two were offered a flat monthly payment to participate. The technology used for fortification begins with a micronutrient premix, which is initially diluted with flour at Seva Mandir to avoid health risks associated with over-ingestion of iron. This produces a pre-blend, which is supplied to the chakkis. Customers brought their grain to the chakkis where it was milled and supplemented with the pre-blend at no additional cost. The final concentration of iron supplies 20-40 percent of the recommended daily intake of iron for males and 10-20 percent for females, based on average daily flour consumption. Detailed data was collected monthly on local health, and individuals gave information on symptoms, self-reported health, and their work schedule during the last week. This survey, in addition to monitoring the compliance of the chakkis, allowed researchers to assess the logistical feasibility of this intervention, as well as its effects on anemia and other health and economic outcomes.

Fortification Uptake: Program uptake by households increased steeply over the first six months, but subsequently declined in all regions. In the two regions which took up the program most intensively, over 60 percent of households were milling their flour at fortifying chakkis at the peak, but this fell to about 40 percent one year into the program. In the other three areas, take up fell to about 20 percent at the end of the study period. Ultimately, endline take up was quite low: only 30 percent of flour was fortified. Some of the drop in take up may be explained by a misunderstanding on the part of the millers: once a household had agreed to participate, millers often failed to fortify their flour at every subsequent visit.

Impact on Anemia: The program was effective in reducing anemia as long as take up was high enough, but ineffective when take up was low. A midline survey shows a significant difference in anemia rate between treatment and comparison villages, of about 7 percentage points, but by endline, when the uptake had fallen, there was no difference in anemia between treatment and comparison groups.

Impact on Health and Work Outcomes: Monthly health monitoring reveals a similar pattern for weakness and fatigue: symptoms were reduced when take up was sufficiently high, but by endline the program had no effect on health. At the endline the program had no impact on participants’ ability to work or the number of days worked. Even though self-reported health was higher when uptake was high, willingness to pay for the program is low: the drop in take up was faster among people whose nearest miller was not fortifying flour, as well as for those who had to walk more than 1.5 kilometers to find a fortifying miller.

Banerjee, Abhijit, Esther Duflo, and Rachel Glennerster. 2011. "Is Decentralized Iron Fortification a Feasible Option to Fight Anemia Among the Poorest?" in Explorations in the Economics of Aging: 317-344.

2 result(s)
Is Decentralized Iron Fortification a Feasible Option to Fight Anemia among the poorest?
Half of India’s Kids will Grow Up Stunted, Says Top Economist