Climate change poses a critical challenge to farmers, as extreme weather patterns increase both the likelihood of crop destruction due to drought or flooding, and variability in output levels. Researchers partnered with CGIAR’s International Rice Research Institute (IRRI) to evaluate the impact of a flood-resistant rice variety on fertilizer use and crop yield in India. During floods, the flood tolerant seeds had a clear advantage over the traditional seeds. In non-flooded areas, there was no significant difference in yields between flood-resistant and traditional seeds, suggesting that there was no yield penalty in non-flood years to farmers who switched to the new seed technology.

River floods affect approximately 21 million people each year, primarily in developing countries, according to the World Resources Institute. India is the country with the most people affected, with an average of 4.8 million people exposed to river flood risk each year. Climate change is projected to exacerbate the likelihood of floods, heat waves, and other extreme weather events. These weather events are particularly challenging for smallholder farmers who have few resources to cope with them. For farming households, these events can substantially reduce income, and they may also make farmers less willing to invest in their farms.

In the face of extreme weather, farmers often self-insure against losses by cultivating crops that have stable but low yields. They may also forgo profitable investments, such as fertilizer or improved seeds, for fear that these purchases will not pay off in the event of a flood or drought. These risk-reducing choices lead to lower productivity, yields, and profits during years with typical weather. Indeed, lower investment in agricultural inputs contributes substantially to the large gap in agricultural productivity between developing and developed countries. Scientists have developed several stress-tolerant crops to help farmers better manage weather risk. These are breeder-selected varieties of common seeds that maintain high yields if a drought or flood occurs. These seeds have been developed relatively recently, so there is limited evidence on whether they can help insure against agricultural risk. Working in partnership with the International Rice Research Institute (IRRI), researchers conducted a randomized evaluation to study the effects of a flood-tolerant rice variety, Swarna-Sub1, on rice yields and farmer behavior in Odisha, India.

One innovation designed to mitigate increased risk imposed by climate change is flood-resistant crop varieties. Researchers from the Consultative Group on International Agricultural Research (CGIAR) have experimented with crossbreeding rice varieties. In their tests, a flood-resistant gene called Sub1 is inserted into the popular Swarna rice variety to create the Swarna-Sub1 variety. Swarna-Sub1 rice is resilient to flood submergence for up to two to three weeks, thereby reducing risk and providing a higher yield potential for farmers. This variety presents a milestone as the first instance of the use of gene crossing to create a stress-tolerant staple grain in a developing country. The Sub1 gene has also been inserted into other popular rice varieties grown by farmers. The success of this new technology has important implications for rice cultivation across South Asia and Africa.

This project evaluates the impact of introducing the Swarna-Sub1 rice variety in the Indian state of Odisha. In this region, rice is a staple food and risk of flooding is high. Low levels of fertilizer use are characteristic of flood-prone areas of India. 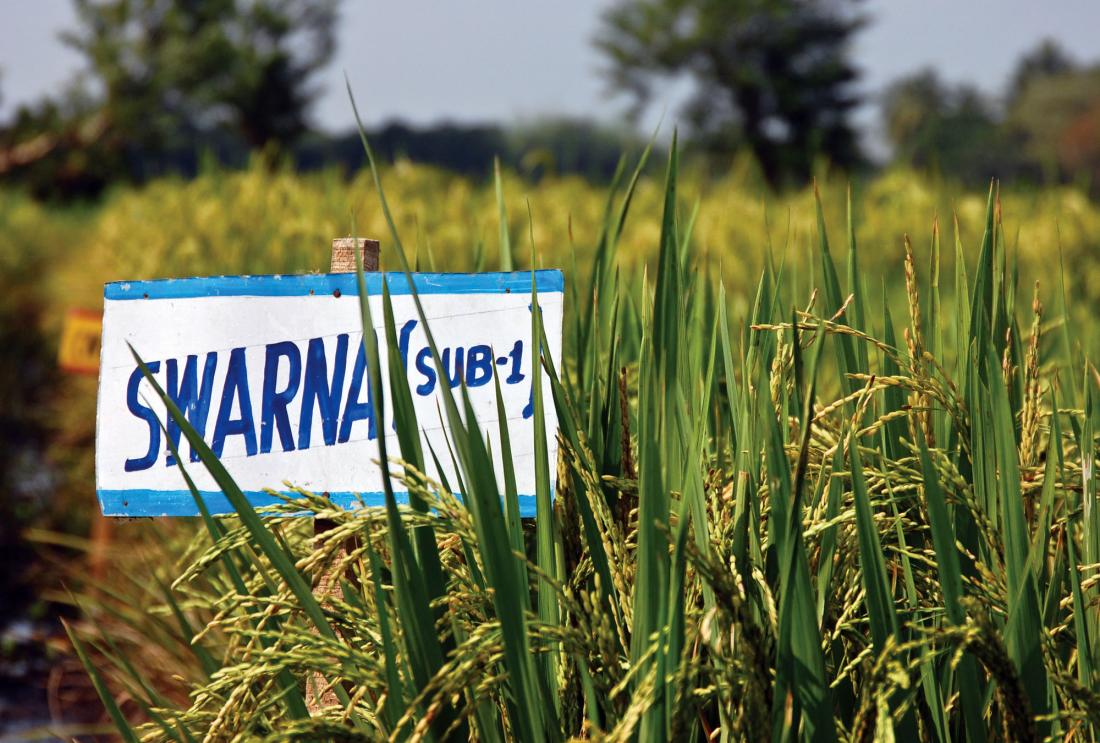 Researchers examined the effects of Swarna-Sub1, a floodtolerant variety of Swarna rice, on yields and farmer behavior in a two-year randomized evaluation. The evaluation took place in two districts of northern Odisha, India—Bhadrak and Balasore—where there are frequent floods and where the Swarna variety is already widely cultivated. Swarna-Sub1 rice is genetically identical to Swarna except for the presence of a gene increasing flood tolerance.

One hundred and twenty-eight villages in the most floodprone areas of the two districts were selected for the study and randomly assigned to either a treatment or comparison group. Within treatment villages, researchers surveyed two sets of randomly selected farmers: those who received Swarna-Sub1 seeds and those who did not.

Approximately 56 percent of households in the study lived below the poverty line, and 18 percent belonged to a Scheduled Caste or Tribe. Surveyed farmers had, on average, slightly less than seven years of education and owned 0.84 hectares of land. Researchers followed the farmers for two growing seasons, 2011–2012 and 2012–2013. There was significant flooding in 2011, but there was no flooding the following year. As a result, researchers were able to observe all three groups of farmers in both flood and non-flood conditions and test whether learning in the first year affected farmer behavior in the second year.

When researchers measured yields in March 2012, following the 2011 floods, Swarna-Sub1 had a clear yield advantage over Swarna when fields were submerged for seven to fourteen days. For each additional day of flooding, planting Swarna-Sub1 increased yields by approximately 64 kilograms per hectare, and led to a 10.5 percent increase in total rice yield overall relative to plots where Swarna-Sub1 was not planted. For floods lasting ten days, the averted yield loss was 628 kg per hectare, representing a 45 percent yield advantage over Swarna. In areas without flooding, there was no significant difference in yield between the two varieties, indicating that there was no disadvantage to planting Swarna-Sub1 in non-flood years.

Access to Swarna-Sub1 led farmers to invest more in their farms.

Receiving Swarna-Sub1 seeds helped protect farmers from the risks of unpredictable flooding, so they had less need to self-insure by making conservative choices. As a result, Swarna-Sub1 farmers made riskier production decisions:

These investments led to higher rice yields and profits even when no flooding occurred.

Access to Swarna-Sub1 seeds increased rice yields by 283 kg per hectare on average—an increase of about 10 percent—over the course of both years of the study even though 2012 was not a flood year. This suggests that risk-reducing seeds have additional benefits beyond those that accrue during weather shocks because they can lead farmers to invest more in their farms. Researchers estimate that the productive behavior changes among farmers who planted Swarna-Sub1 accounted for 41 percent of the long-term increase in rice yields. The higher yields also increased farmers’ revenue by INR 2,969 (approximately US$47) per hectare relative to farmers in comparison villages, although 36 percent of this additional revenue was spent on productive investments.

Scaling up Swarna-Sub1 to flood-prone areas would likely benefit marginalized farmers the most.

Farmers belonging to Scheduled Castes or Scheduled Tribes, which are historically marginalized groups, disproportionately cultivate land in flood-prone areas in Odisha. On average they experienced 1.83 more days of flooding in 2011 than higher-caste farmers. Using a simulation, researchers estimated that if all farmers in the flooded sample area had used Swarna-Sub1, yields would have increased by 25 percent among the higher-caste farmers and by 40 percent among farmers in Scheduled Castes or Tribes. This suggests that although widespread adoption of Swarna-Sub1 could increase yields for all farmers cultivating in flood-prone areas, the poorest and most marginalized farmers would likely benefit most.

Stress-tolerant crops can reduce risks to farmers and make them more resilient in the face of climate shocks.

Swarna-Sub1 and other stress-tolerant varieties can help farmers who rely on rain-fed agriculture to cope with unpredictable weather events. Swarna-Sub1 significantly increased yields in flood conditions without any yield loss in non-flood years. In addition, Swarna-Sub1 is very similar to Swarna, which is already popular among rice farmers in India, so switching to Swarna-Sub1 does not require significant changes in behavior or an extensive information campaign—a sharp contrast with more complex innovations designed to address risk, such as microinsurance. IRRI and other agricultural research centers are developing and testing other stress-tolerant crops, such as drought- and saline-tolerant varieties, to see if they can similarly protect farmers. Stress-tolerant varieties could be critical technologies for improving smallholder farmers’ resilience to climate change.

Mitigating agricultural risk through stress-tolerant crops could be an important step in getting farmers to invest more in productive agricultural inputs and practices.

Swarna-Sub1 protected against the risk of unpredictable flooding, so farmers had less need to self-insure by making conservative planting and investment decisions. This resulted in a number of changes to farmer behavior including cultivating additional land, increasing investment in inputs, adopting improved planting techniques, and changing savings and credit decisions. These are many of the changes that governments, NGOs, and international organizations have been trying to induce smallholder farmers to make in order to enhance their farms’ productivity. The adoption of stress-tolerant crops, such as Swarna-Sub1, appears to be a promising way to address weather risks, allowing farmers to make investments that can increase productivity, yields, and ultimately profits.

In Odisha, Swarna-Sub1 could disproportionately benefit farmers belonging to Scheduled Castes or Scheduled Tribes, who have often been relegated to low-lying, flood-prone lands. Flooding is more likely to affect them than higher-caste farmers, so their potential gains from cultivating Swarna-Sub1 are greater. To the extent that marginalized groups around the world tend to farm less desirable pieces of land—and to the extent that climate change will make this land increasingly more difficult to farm—the development and adoption of crops that better tolerate a number of different environmental and weather conditions could help mitigate the effects of these entrenched inequalities.