Workers and employers in rural villages in low- to middle-income countries often lack a centralized place to look for or post jobs, which leads to high job search costs, incomplete information, and consequently, a wide pay-range for similar work. The researcher conducted a randomized evaluation in rural Tanzania to determine the impact of an SMS-based messaging application that connects agricultural workers and employers on wages. He found that the SMS-based messaging app reduced wage spread within villages–meaning employers paid a wage closer to the average wage, suggesting that a simple digital technology has the potential to help improve the functioning of rural labor markets.

Workers and employers in rural villages in low- to middle-income countries often lack a centralized place to look for or post jobs, which makes the job search process time-consuming and costly. As a result, employers typically struggle to find new and qualified workers and often rehire the same workers from previous seasons. These non-centralized hiring practices result in imperfect labor market outcomes, with workers being paid different wages for relatively similar farm work. One way to overcome this problem is to introduce an SMS-based messaging app that can make it easier for workers and employers to find each other. Through the app, workers can access new job opportunities and employers can consider new workers outside their existing network, thereby increasing job competition. The increase in competition could reduce fluctuations in wages paid for the same work and improve the functioning of the local labor market.  Can a SMS-based messaging app for feature phones reduce the cost of connecting employers and agricultural workers and improve rural labor market outcomes?

Farming in Tanzania is small-scale and labor intensive, and most production is for subsistence. Families take on much of the agricultural labor responsibility in this context, but farmers still hire daily laborers to take on some of the workload of harvesting maize and beans. For example, during the longer, more productive agricultural season from March to August in Tanzania, called the “long rains”, around fifty percent of farmers in 2017 hired daily laborers to work on their farms for a short two to three-day stints. These workers’ wages varied from US$1.20 to US$6.50 a day with an average of US$3.10. Employer farmers rarely hire workers from outside their own village.

While smartphone ownership remains relatively low in the study regions, 93 percent of the population owns feature phones. Furthermore, high literacy in the region of 84 percent makes an SMS-based messaging app accessible to most employers and agricultural workers. 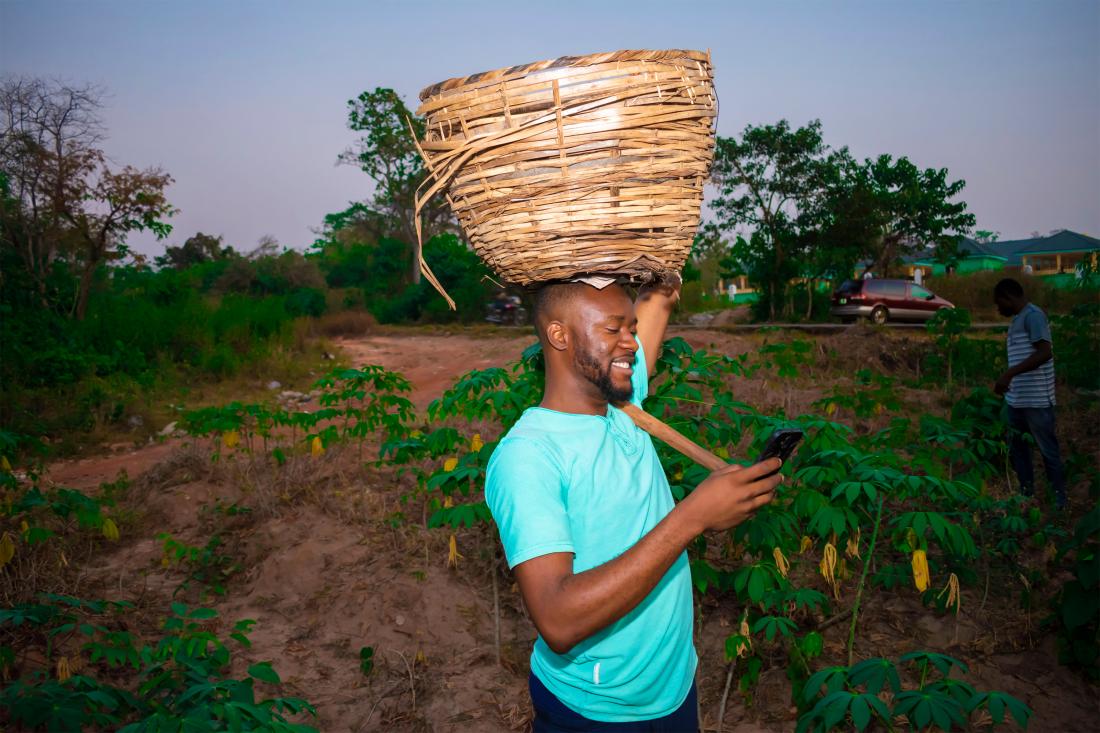 The researcher conducted a randomized evaluation in two northern regions of Tanzania - Kilimanjaro and Manyara - to determine the impact of an SMS-based messaging app designed to connect agricultural workers and employers on wages. The researcher identified 147 villages in these regions and excluded those that were located in Moshi town, the major hub in Kilimanjaro Region, and those that had phone ownership under 80 percent. Of the remaining villages, 70 villages were randomly sampled and assigned into two groups, 40 villages were provided with access to the SMS app and 30 villages served as the comparison group. The evaluation was conducted right before the 2019 “long rains” agricultural season.

In villages that were provided access to the SMS app, the researcher conducted hands-on training sessions at village meetings to demonstrate how the messaging app worked. Employer farmers can post job descriptions that are sent via SMS to all registered workers in the surrounding area, which allows employers to reach a large number of workers instantly. If a worker replies to the job ad, the app instantly forwards the worker’s application to the employer who initiated the request. During this process, the researcher also randomized the disclosure of wages in the job ads and job applications to examine how users respond differently to explicit wage information.  Both employers and workers were encouraged to use the app via text messages and raffles throughout the agricultural season.

The researcher conducted phone and in-person surveys to evaluate the impact of the app on wages within each village, including the average wage and spread of wages among different workers, labor market outcomes such as labor allocation between hired and family labor, labor input, job creation, as well as harvest outcomes.

Results found that take-up of the SMS-based messaging app in villages where it was introduced was high and it reduced wage spread – meaning employers paid a wage closer to the average wage for similar work. This suggests that the app was successful in helping employers and workers connect. However, the app did not increase the average wage or the number of jobs available.

SMS-based messaging app: The researcher found that introduction of the app led to a 16-40 percent decrease in wage spread. Evidence suggests that an increase in job competition as a result of the app for high-paying employees contributed to the reduction in wage spread. Initially high-paying employers reduced the amount they paid workers and lower- and medium paying employers increased the amount they paid. As a result, the average wage among SMS villages did not change relative to comparison villages. The evidence suggests that the app was successful in helping employers and workers connect and improving the efficiency of the village labor markets.

The large and persistent usage of the app suggests that this technology was simple to use, and it was useful for farmers because it connected employers and workers at near-zero user cost. Many have reported that the app made it possible to ﬁnd workers and jobs faster with less eﬀort. Furthermore, there were positive signs that the app could continue to be useful since 50 percent of treatment farmers indicated that they plan to use the app in the next season, and 74 percent of those who plan to use the app are willing to contribute an average of US$1.5 per season. Additionally, employers needed less workers than usual due to low rainfall in the 2019 season, so the effects of the app may be understated. Thus, simple digital technology, such as an app that broadcasts available jobs and collects basic job applications through SMS, has the potential to make it easier for employers and workers to interact with one another, both increasing the size and helping to improve the functioning of rural labor markets.