Stereotypes are over-generalized representations of characteristics of a certain group that may cause biased judgment or discrimination. Discrimination, in turn, may influence the behavior of discriminated groups to fit that stereotype, potentially reducing effort, self-confidence, and/or productivity. One particular problem is potential discrimination that young students may face. If students feel discriminated against, they may be discouraged and work less, which may have long-term impacts on their future careers and well-being. Do teachers in Italy grade native students and immigrants differently based on their stereotypes? Can informing teachers of their stereotypes against immigrants impact how they grade immigrants and native students?

In the Italian schooling system, the share of immigrant children—defined as children without Italian citizenship—has increased substantially in the last two decades, increasing from less than 1 percent in 1998 to 10 percent in 2018. Immigrant students come from diverse backgrounds; the most represented nationalities are: Romanian, Albanian, Moroccan, Chinese, Filipino, and Indian.

During the three years of middle school in Italy, students remain in the same class for all subjects and the same teachers typically instruct students. Each week students spend at least six hours with their math teacher and five hours with their literature teacher. At the end of grade 8, students choose whether to go to academic, technical, or vocational high-school, where academic and technical schools offer better educational and employment prospects.

Over 67 percent of teachers in the study exhibited moderate to severe bias against immigrant students, as measured by an Implicit Association Test (IAT). IAT, widely used in social psychology, exposes participants to two concepts and detects how strongly individuals connect these concepts. One application of this test is in understanding how strongly people associate certain groups with certain stereotypes. The average bias of Italian teachers against immigrants is substantially higher than the average bias of people in most European countries who take the IAT online.

In addition to teachers assigning grades, the National Institute for the Evaluation of the Italian Education System (INVALSI) assesses student’s academic performance through blindly-graded, standardized tests. If teachers grade immigrant students of the same ability (i.e. with similar INVALSI test scores) more harshly than native students, it may reveal discrimination. Researchers found that that this was the case: immigrant students who received the same blindly-graded standardized test score as native students received lower grades from their teachers. When broken down by subject, math teachers with stronger implicit stereotypes gave lower grades on average to immigrant students with the same INVALSI scores as native students, while literature teachers did not. Researchers suggest this might be because multiple choice standardized tests in literature might be ill-suited to measure relevant skills like language proficiency. Additionally, literature teachers may grade immigrants on different standards since there are additional language difficulties for non-native speakers in their subject. 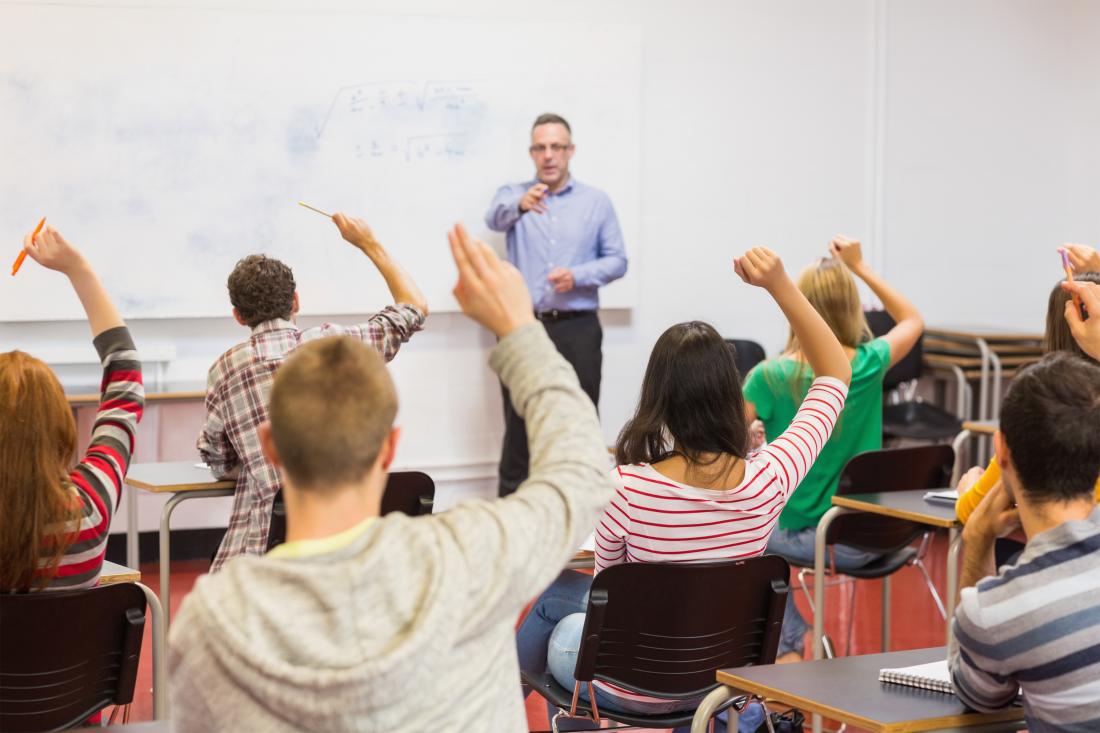 A teacher points to one of many students raising their hands in a classroom.
Photo: Shutterstock.com

They study involved math and literature teachers across 65 middle schools in five cities in Northern Italy. To gain a baseline understanding of teacher beliefs about immigrants, researchers surveyed teachers about the role of teachers advising students on high school choice. The survey included an IAT aimed at measuring teacher’s implicit stereotypes toward immigrants. The IAT captured how teachers associated Italians and immigrants with positive and negative concepts.1 In addition, the survey included a series of questions on teachers’ demographic characteristics, teaching experience, and explicit beliefs about immigrants.

After conducting the surveys, teachers had the opportunity to receive feedback on their IAT score. More than 80 percent of teachers chose to receive feedback. Researchers randomized the timing of feedback across schools. Teachers in half of the schools (the treatment group) received the feedback before the end-of-semester grading. Teachers in the other half of schools (the comparison group) received the feedback after they submitted end-of-semester grades, or about two weeks later. Researchers provided feedback via e-mail. Each teacher received their IAT score, a brief description of the test, and the common thresholds of bias (“slight,” “moderate,” or “strong”). The email also reassured teachers that their results would not be shared with anyone.

Results indicated that informing teachers of their implicit stereotypes improved the grades teachers gave to immigrant students.  Results were driven by teachers without explicit negative views towards immigrants, suggesting that they may not have been aware of their own stereotypes but updated their grading once they became aware. Revealing stereotypes may be a powerful intervention to decrease discrimination, but it may also cause individuals who were not previously acting in a biased way to react, inducing positive discrimination toward immigrant students by some.

These results were driven by teachers without explicit bias, i.e. those who agreed that “immigrants and natives should have equal opportunities of accessing available jobs.” These teachers were more responsive to the early feedback. This result suggests that teachers who did not express explicit anti-immigrant views may not have been aware of their own stereotypes; otherwise, providing information on their implicit bias should not have changed their grading behavior.

Impact on failing rates: Early IAT feedback may be particularly impactful for math teachers who are close to failing students (i.e. giving a grade of 5 versus 6). Offering the option for early feedback decreased the probability of math teachers failing immigrant students by 9.4 percentage points from an average fail rate of 33 percent for immigrant students (a 28 percent decrease). There was no effect on the failing rates for native students. Similarly, offering IAT feedback before end-of-semester grading did not impact literature teachers giving failing grades.

1.
The IAT required teachers to quickly categorize typical Italian names and common names among immigrant children in Italy with positive or negative adjectives in the schooling context. To the extent that teachers are biased against immigrant students, they should react more slowly when the immigrant-sounding names are associated with positive adjectives, because those associations are more difficult for their minds to process.