Numerous governments in low- and middle-income countries, such as Brazil and Mexico, have adopted conditional cash transfer (CCT) programs as a social safety net, but most recipients of these transfers have little or no experience with formal financial products. Researchers collaborated with Fundación Capital and the Government of Colombia to conduct a randomized evaluation of LISTA, a tablet-based financial education program designed for participants in Colombia's government CCT program, to study its impact on financial knowledge and behavior. LISTA had significant positive impacts on participants’ financial knowledge, attitudes, practices, and performance. Many of these impacts persisted after two years, while some waned over time. The long-term impact on participation in the formal financial system was limited, suggesting that financial education alone may not be sufficient to increase formal financial inclusion.

Global access to formal financial services is increasing; while only 51 percent of adults had an account in 2011, 69 percent had an account in 2017.1 However, as many as three-fourths of the newly-banked global poor have never received any form of financial training and are left to make decisions that affect their financial futures with little help or formal instruction.2 As new services such as cash transfers and mobile banking expand, this population is expected to grow. Traditional financial education programs may not be the answer, as randomized evaluations have found mixed results for these types of interventions in developing countries.3 And even when financial training does lead to improvements in financial knowledge and behavior, it can be difficult for financial education providers to customize the curriculum to the specific needs and interests of each participant in a cost-effective and scalable way. Integrating technology into financial education programs may help providers address some of these challenges.

In Colombia, the Más Familias en Acción (MFA) conditional cash transfer program reaches 2.6 million poor and extremely poor families.4 Eligible households include those that rank lower than established thresholds on the national poverty index (SISBEN), families in extreme poverty, and victims of displacement caused by Colombia’s internal armed conflict. The cash transfers are provided through channels including ATMs, local agents, and mobile phone-based wallets. In Colombia, as in other contexts with CCT programs, beneficiaries in each community elect a representative to serve as a local leader for the program; these representatives are called “mother leaders.” Since the vast majority of MFA recipients are female, this intervention was tailored for women participating in the MFA program. Ninety-one percent of the participants in this study were female. The study was implemented and evaluated in medium-sized municipalities (populations ranging from 30,000 to 50,000) on the Atlantic and Pacific coasts, two of the poorest regions in Colombia. At the time of the study, there were no other financial education interventions in those areas.

Fundación Capital, an international social enterprise dedicated to reducing poverty at scale through public and private sector partnerships, designed the LISTA para Ahorrar (“Ready to Save”) program between 2012 and 2014, supported by the Citi Foundation and in cooperation with the Government of Colombia’s Prosperidad Social. Through LISTA, community leaders circulate access to shared tablet computers allowing participants to spend time with the training application on the devices. Participants are able to learn from the comfort of their own homes, study at their own pace, and customize their learning by focusing on topics most relevant to them. LISTA integrates audio, video, and gaming elements in an attempt to overcome literacy barriers and make the experience more entertaining.

In 2015, Prosperidad Social incorporated LISTA into their social policy and launched the LISTA program, with the goal of reaching 100,000 MFA recipients in 30 municipalities. This evaluation tested the impact of LISTA’s tablet-based application on financial knowledge and attitudes, informal and formal financial practices, and use of financial products by CCT beneficiaries. 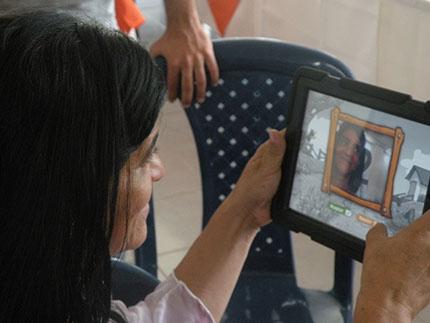 Researchers and IPA partnered with Fundación Capital and the Government of Colombia to evaluate the impact of the LISTA Initiative on financial attitudes, knowledge, practices, and performance of the beneficiaries. The application let users organize and visualize savings, expenses, and debt, and included educational content and testimonial videos on topics such as budgeting and the MFA program. It also contained information and simulations about ATM use and mobile wallets, as well as games about financial rules of thumb that could be played individually or in groups.

Stage 1—Tablet-based financial education: Researchers randomly assigned each of 60 municipalities to the treatment or comparison group. In treatment municipalities, tablets were distributed among local mother leaders to share with other intervention participants in their communities. Fundación Capital held an introductory session where mother leaders were introduced to LISTA, volunteered to participate in the program, and set goals for the number of women they would help train with the tablet application during the tablet-rotation period. Each leader had about two months to reach their goals, after which they had to pass the tablet along to a different leader in the community, allowing more households to be reached with a small number of tablets. A kit of printed materials, including calendars with stickers to create a savings plan and simplified accounting books, was also distributed to LISTA users. The materials were designed to reinforce LISTA user motivation, put in practice what they learned in the application, and permit them to retain physical and personalized training material as reference for when the tablet left their home. Participants in the control municipalities did not receive any intervention.

Stage 2—SMS reminders: After the tablet-based intervention ended, researchers randomly assigned a subset of mother leader groups from the tablet treatment group to receive follow-up SMS messages. Beneficiaries in these groups each received 14 “reinforcement” messages offering reminders and rules of thumb. These text messages were sent for four months after the tablet-based intervention to reinforce the lessons from the tablet and remind users to save. Participants in the groups that were not assigned to receive SMS reminders did not receive any messages and were left only with the LISTA kit materials.

In order to evaluate the impact of LISTA over time, researchers conducted three surveys: a phone survey immediately after the tablet program ended, an in-person survey seven months later, and a final survey conducted over the phone 25 months after the program ended. Researchers also analyzed administrative data provided by Prosperidad Social, transaction data from MFA partner banks, and credit data from the Colombian financial superintendency.

Overall, LISTA had significant positive impacts on participants’ financial knowledge, attitudes, practices, and performance, though the SMS intervention did not. Many of these impacts persisted after two years (25 months), while some waned over time. The long-term impact on participation in the formal financial system was limited, suggesting that financial education alone may not be sufficient to increase formal financial inclusion.

Effects on financial knowledge, attitudes, and preferences: Participants demonstrated higher levels of financial knowledge: MFA beneficiaries assigned to LISTA had a better understanding of savings and budgeting concepts than those in the comparison group, measured by performance on “true or false” tests delivered as part of the follow-up surveys. Improved financial knowledge persisted for at least two years after the program ended. Participants’ preferences changed, as well: those assigned to LISTA were more likely to report preferring money in the bank to cash. They were also less likely to choose one amount of money today over a larger amount in the future.

While participants’ reported trust and comfort with banks increased immediately and seven months after LISTA, these impacts largely dissipated after two years.

Other forms of engagement with formal financial institutions, such as leaving money in an MFA account after the transfers were disbursed, also increased at first but dissipated in the long term. This result is consistent with the short-, but not long-run, increase in trust and comfort with banks.

Impact of SMS reminders: The SMS reminders led to medium-term improvements in financial knowledge, but did not change financial attitudes or practices.

Potential mechanisms of impact: In general, impacts were larger for populations who were poorer, less educated, younger, and more rural, suggesting that the information provided by LISTA was particularly important for households facing relatively greater financial challenges.

Researchers hypothesize that four mutually-reinforcing factors may have contributed to these impacts: simple, focused, and memorable content; “social learning” involving multiple members of the household made possible by using tablets inside the home; the close relationship between local MFA leaders and the ultimate users of LISTA with whom they directly shared the program; and “social learning” within communities as well as within households. More limited impacts on engagement with the formal financial system may indicate that geographic access, product design, or other barriers to participating in the formal financial system were at play in this context.

Informed by these results, Fundación Capital has expanded the LISTA initiative to reach approximately 520,000 individuals in Brazil, Colombia, the Dominican Republic, Honduras, and Mexico.Over half of this expansion was supported by the USAID-Skoll Innovation Investment Alliance, which made evidence of impact one of the conditions for funding.