Simple, low-cost behavioral nudges may help reduce the likelihood of a person with a court summons failing to appear in court, and by extension reduce pre-trial detention. Researchers partnered with policymakers in New York City to evaluate the impacts of a redesigned court summons form and text message reminders on failure to appear (FTA) in court. A randomized evaluation found that text message reminders were able to reduce FTA by up to 26 percent, translating to 3,700 fewer arrest warrants per year. The results indicate that criminal justice policies that focus on behavioral barriers can reduce negative consequences for both citizens and the criminal justice system, without resorting to the traditional lever of increasing enforcement.

Governments issue court summonses for low-level offenses ranging from littering on the street to drinking in public, which require offenders to appear in court on a certain date at a certain time. The criminal justice system places great weight on ensuring that people attend required hearings and enforces prescribed responses if they fail to do so. Regardless of the offense severity, failure to appear (FTA) in court automatically results in the issuance of an arrest warrant in many jurisdictions. Yet, 21 to 24 percent of people with felony cases fail to appear in court,1 and FTA rates for misdemeanor and low-level offenses are even higher, leading to thousands of arrest warrants. These arrest warrants are costly and burdensome for both the criminal justice system and recipients.

To reduce FTA and resulting warrants, one traditional policy approach has been to more strictly enforce arrest warrants to deter individuals from skipping their court date. However, a behavioral economics perspective suggests many behavioral factors could lead people to inadvertently fail to appear in court, such as not knowing they need to attend court, forgetting their court date, or failing to plan ahead to make it to the court at the prescribed time.

In 2014, people in around 40 percent of the approximately 320,000 cases for low-level offenses in New York City (NYC) did not either appear in court or resolve their summonses by mail. This represents approximately 130,000 missed court dates. Hundreds of thousands of arrest warrants in NYC were open due to FTA as of January 2018.

Behaviorally informed alterations to the summons form and pre/post court date text messages were rolled out to individuals who received summonses in NYC starting in March 2016. Anyone in New York City receiving a summons is given the option to provide their cell phone number to police, and approximately 13 percent do. Roughly 20,000 summons recipients who provided a cell phone number between March 2016 and June 2016 were included in a randomized evaluation to test the effect of text messages on FTA. 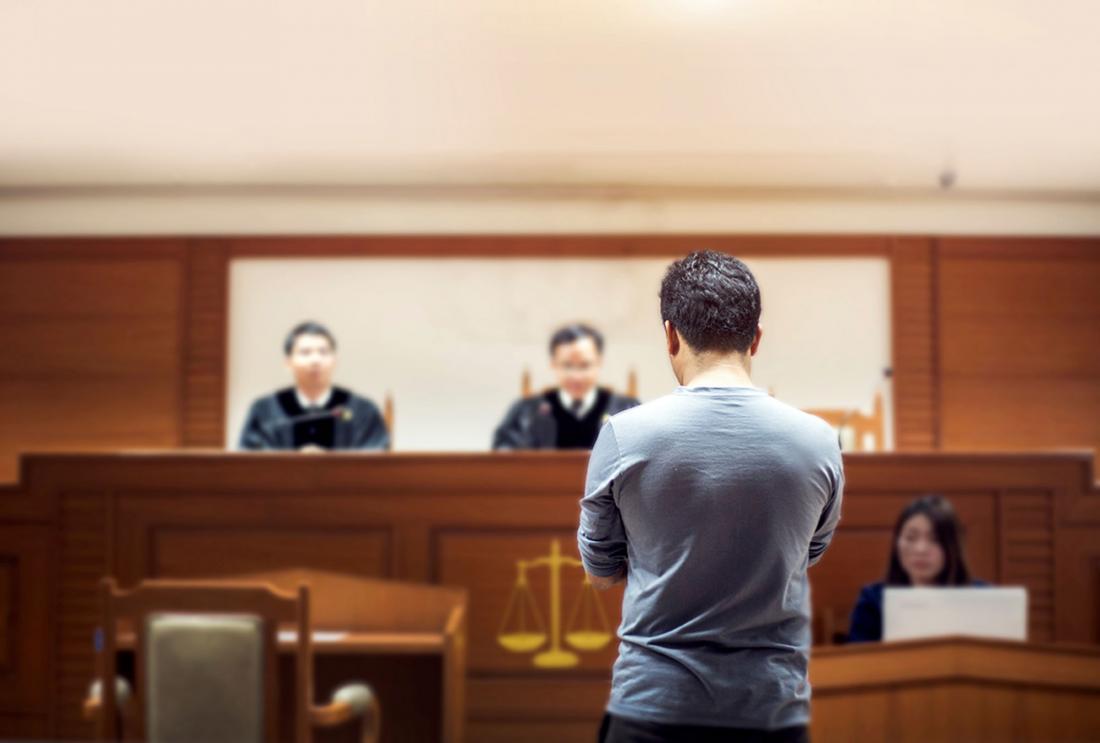 Photo: Shutterstock. Man stands before judge in a courtroom.

Researchers partnered with the New York City Mayor’s Office of Criminal Justice, New York City Office of Court Administration, and New York City Police Department to conduct a randomized evaluation testing behavioral approaches intended to reduce FTA. In preparation for the randomized evaluation, the research team worked with the police to redesign the summons form using insights from behavioral science. The new form incorporated a clear title describing required action, the date, time and location of the court appearance at the top of the ticket, and the clearly articulated consequence of FTA.

Researchers then randomly assigned people who received summonses on the new forms and who provided their phone number to police to receive various text messages, with the goal of learning which messages may be effective at reducing FTA.

The different text message treatment groups are detailed below. Some messages were reminders sent before court dates, and some were follow-up messages for people who had failed to appear in court. The seven treatment groups each received a different combination of pre-court and post-FTA messages. The comparison group received no messages at all. 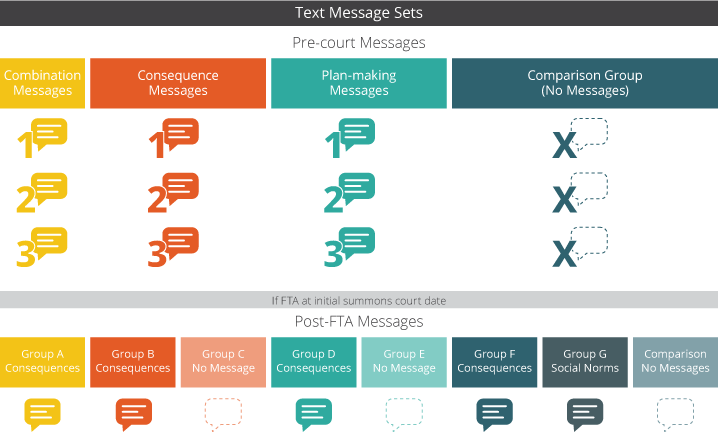 Pre-court consequence messages highlighted the ramifications of failing to attend court (e.g. “Go to court on Mon Jun 03 9:30AM. We’ll text you to help remember. Show up to avoid an arrest warrant.”)

Pre-court plan-making messages prompted recipients to prepare to attend court (e.g. “Go to court on Mon Jun 03 9:30AM. Mark the date on your calendar and set an alarm on your phone.”)

Redesigned forms
The redesigned court summons form reduced failure to appear in court by 6.4 percentage points (compared to a baseline of 41 percent among the quasi-experimental control group receiving the old form), or roughly 17,000 fewer arrest warrants per year in New York City.

The most effective set of messages was the series that combined elements of plan-making and consequences (represented as Group A in the above graphic). These messages explained what to expect at court, encouraged the recipient to make a plan to show up, and highlighted the consequences for not showing up. If the recipient failed to appear, a follow-up message stated that an arrest warrant had been issued as a consequence and encouraged action to resolve the open warrant (“You won’t be arrested for it if you clear it at 346 Broadway, Manhattan.”).

Policy Lessons
Overall, the combination of the redesigned summons form and most effective text messages avoided an estimated 20,800 arrest warrants in one year. This represents a significant impact at very low cost: each message cost less than 1 cent, and sending a three-message set of reminders to all summons recipients in 2014 would have cost the city less than $7,500. Additionally, the messages could have a larger impact on the overall FTA rate if police were able to collect phone numbers for more people when issuing summonses.

As a result of this evaluation, the redesigned summons forms are now used for all court summonses and the most effective set of text message reminders is sent to all summons recipients who provide a cell phone number.2 The researchers suggest both interventions could be scalable and cost-effective in other jurisdictions due to their inexpensive nature, especially when compared to the high financial and human costs of pre-trial detention.

1 result(s)
How the economics Nobel laureates’ methods could help fight poverty in the U.S.