The slow adoption of new agricultural technologies is an important factor in explaining persistent productivity deficits among smallholders in Sub-Saharan Africa. Farmers often postpone the adoption of packages of technologies that work best when applied together, oftentimes because they lack information about why and how to use them. Researchers randomly evaluated the effects of a decentralized extension program and an additional video-based information campaign on farmers’ adoption of a package of integrated soil fertility management (ISFM) technologies as well as individual practices in Ethiopia. They found that both in-person extension services and extension services combined with a video campaign increased the adoption of the package and some practices of ISFM. This increase was driven by improvements in awareness and knowledge of practices.

The slow adoption of new agricultural technologies is an important factor in explaining persistent productivity deficits among smallholders in Sub-Saharan Africa. In particular, farmers often postpone the adoption of packages of technologies that work best when applied together. Information is often cited as an important barrier to technology adoption, making effective agricultural extension key to the dissemination and subsequent adoption of new, improved technologies. However, extension systems often have shortcomings, such as high bureaucratic burden, excessive costs of direct trainings, limited geographic coverage, and exclusion of marginalized or resource-poor farmers. In recent years, extension systems in many Sub-Saharan African countries have moved towards decentralized, or “bottom-up,” models in which model farmers play an active role in information sharing by training their peers in extension methods they were first taught by professional extension agents. Until now, there has been little rigorous research on decentralized extension systems or the effect of different types of extension models on the take-up of new technologies more broadly. Can a decentralized, participatory extension program with an added video-based module effectively transfer information to farmers and increase the adoption of agricultural technologies?

Agriculture forms the backbone of Ethiopia’s economy, accounting for more than 35 percent of the country’s GDP as well as the major income source for around 75 percent of the population. Despite this, agricultural yields remain comparatively low. In 2010, the Ethiopian government responded to this challenge with considerable investments in the extension system, announcing a transition from a centralized top-down approach to a participatory extension system which emphasizes grassroots farmer groups and peer-to-peer learning.

Integrated soil fertility management (ISFM) is a widely-promoted concept that aims to improve general agronomic techniques, including the five technologies evaluated in this study: compost, blended fertilizer, improved seeds, line seeding, and lime application to soil. It is viewed as a strategy to sustainably intensify agricultural productivity and combat land degradation caused by excessive deforestation and inappropriate land-use practices by agriculture. The project evaluated here was launched in 2015 as part of the broader Ethiopian Sustainable Land Management Program and operated in three highland regions of Ethiopia—Amhara, Oromia, and Tigray. Farmers targeted to participate in this program managed about 1.3 hectares of land, cultivated at least one staple crop, and were only using 1.4 out of five of the ISFM technologies before the intervention began. These households consisted of about five members, were mainly headed by men, and mostly depended on farm activities for income. 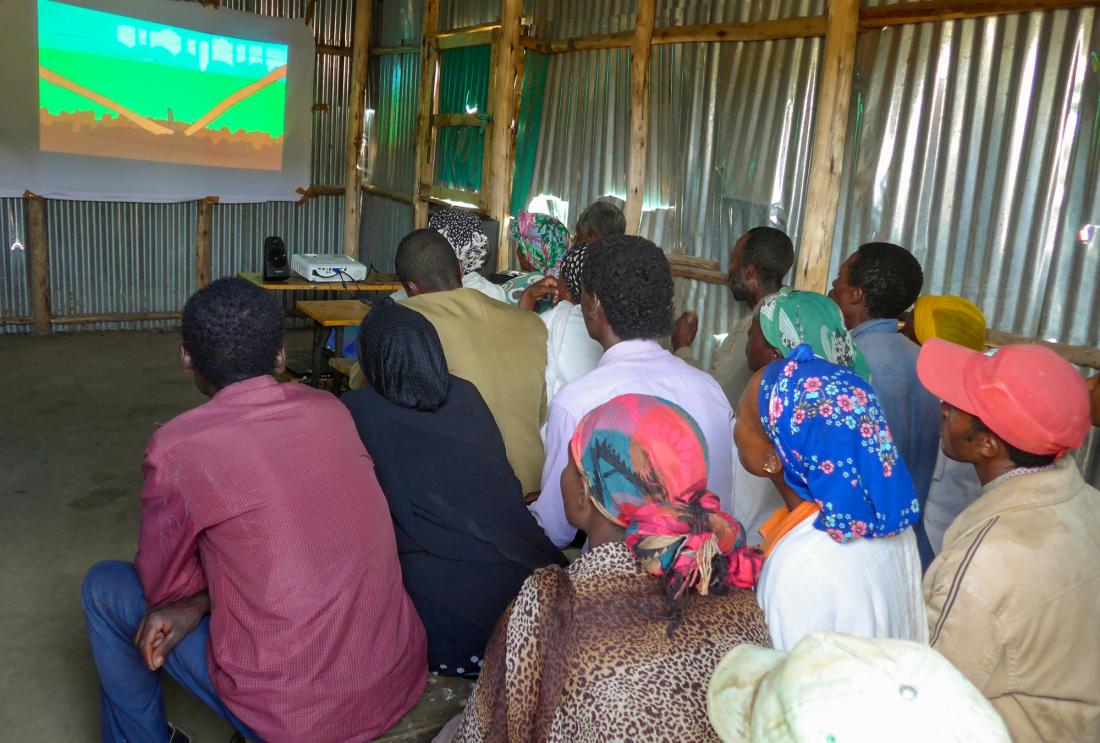 Working with the German Agency for International Cooperation’s Integrated Soil Fertility Management Project, researchers evaluated the effects of a decentralized extension program and an additional video-based information campaign on farmers’ adoption of the ISFM package of technologies. Researchers randomized so-called microwatersheds (mws) (agglomerations of rural communities sharing a water outlet) and farm households residing in these mws into one of three groups:

The ISFM program began in 2015, but the implementation of extension services started at the beginning of the 2016 planting season and the video campaign was conducted six weeks prior to the 2017 growing season. Researchers conducted surveys both before the rollout of extension services in 2016 and at the end of the study in early 2018 using face-to-face interviews and tablets. They collected data on sociodemographic characteristics, income, food security, farming practices, production levels, and exposure to extension services. For some practices, researchers were able to crosscheck farmers’ self-reports of practice adoption with on-farm observations.

Researchers found that both the extension activities and extension combined with a video campaign increased the adoption of the package of ISFM practices. They suggest that this was driven by improvements in awareness and knowledge of practices.

Practice Adoption: Researchers measured how many ISFM practices farmers adopted in the 2017 harvest cycle, ranging from 0 to 5. In an mws where only extension was provided, farmers on average adopted an additional 0.683 practices, while farmers in an mws where extension services and the video campaign were both offered adopted, on average, 0.840 more practices than those in the comparison group, who adopted around 2.2 technologies. Both versions of the program increased farmers’ decisions to adopt compost, improved seeds, line seeding, and lime, but neither version affected adoption of blended fertilizers. Further, researchers found that receiving only extension was associated with an 8.4 percentage point increase (55.3 percent) in the likelihood of adopting the full set of practices on the same plot relative to the comparison group, while the likelihood to adopt the full set of practices of farmers who received extension and the video was 10.9 percentage points (71.7 percent) higher than the comparison group. Yet, on average, researchers were unable to detect an important difference in adoption between FREG farmers who received extension only and FREG farmers who received extension plus the video.

Using matching techniques, researchers also found that farmers who did not directly participate in a FREG but who were in an mws selected to receive extension services adopted 0.278 more practices, but were not more likely to adopt the full set of practices on a plot than their matched comparison farmers. Similarly, non-FREG farmers who lived in an mws that received both extension services and the video campaign adopted 0.483 more practices and were 8.4 percentage points more likely to adopt all practices in combination than their matched comparison farmers.

In sum, the decentralized, participatory extension approach led to an increase in the adoption of ISFM, for both the integrated system and some of its individual practices. The addition of the video improved knowledge of why the practices were important for farm productivity, although on average it had no additional effect on the actual adoption of ISFM. The knowledge and adoption gains of farmers who were not FREG members and therefore did not receive formal extension services suggest that the success of decentralized approaches depends on information sharing between farmers, since only a relatively small fraction of farmers actively takes part in extension activities. Additional interventions, such as information provision via video, have the potential to counteract incomplete information diffusion between farmers and foster adoption among those who are excluded from group-based extension activities.

Informed by the results of this study, the German Agency for International Cooperation has scaled the ISFM+ project into fourteen additional districts in one new region as well as 28 new districts in the original three regions of Ethiopia. Specifically, the project is now active in a total of sixty districts across four regions. The video-based component of the extension system has been scaled to reach all participating FREGs due to the ease of implementation for farmers who may otherwise be excluded from information diffusion is now more intensively used.