Individuals often fail to invest in preventive healthcare, even when such investments cost little and individuals are aware of their benefits. Researchers evaluated the impact of light-touch psychological interventions on health and economic outcomes, with a particular focus on the chlorination of drinking water. One intervention encouraged participants to visualize alternative realizations of the future based on current behavior; a second one built participants' ability to make concrete plans. After twelve weeks, visualization increased objectively measured chlorination; it also reduced diarrhea episodes among children and increased savings. After almost three years, visualization increased chlorination, savings, and labor supply, while effects of the planning intervention were weaker.

Diarrhea is the second leading cause of death worldwide among children aged one to five, contributing to nearly half a million deaths in 2015. Often caused by consumption of unclean water, it is a leading cause of morbidity and stunts healthy growth in children. Chlorine can be used to purify water. In many settings, it is readily and cheaply available, but infrequently used by individuals without access to clean water. Interventions that provide chlorine for free, often in combination with information or marketing campaigns, can increase usage of chlorination somewhat, but take-up often remains low.  A growing body of evidence suggests that behavioral or psychological constraints may explain some of the low demand for preventive health products like chlorine. For example, low demand for commitment products suggests a role for present bias in health decisions. People may not be sufficiently future-oriented to consider the health benefits to their children, and weigh these against small costs in the present. It is, however, not yet explored how low-cost, scalable psychological interventions can address these behavioral constraints across multiple target behaviors.

In Bungoma and Kakamega counties in rural western Kenya where the study took place, child diarrhea is relatively high. At baseline in 2017, the diarrhea prevalence of children under the age of three was 16 percent. Most of the population relied on communal water sources, usually wells with pumps or springs. Women and children collect drinking water in plastic jerry cans and store it in jerry cans or pottery jars. Water can be (re)contaminated easily if storage containers are left open, or when water is removed from storage pots.

Stakeholders in Kenya have carried out efforts to reduce diarrhea prevalence through chlorination, but take-up of chlorination remains low. Since 2003, an NGO had been heavily promoting and distributing chlorine dilute in the area, leading to widespread awareness of the product and knowledge that chlorination reduces diarrhea. Despite a previous campaign in which villages in the study areas received chlorine dispensers, use of chlorine remained low. At baseline, based on water samples collected in unannounced home visits in 2018, 22 percent of households had detectable total chlorine in their water, despite the fact that 66 percent of households reported chlorination as one of their main methods of treating water. 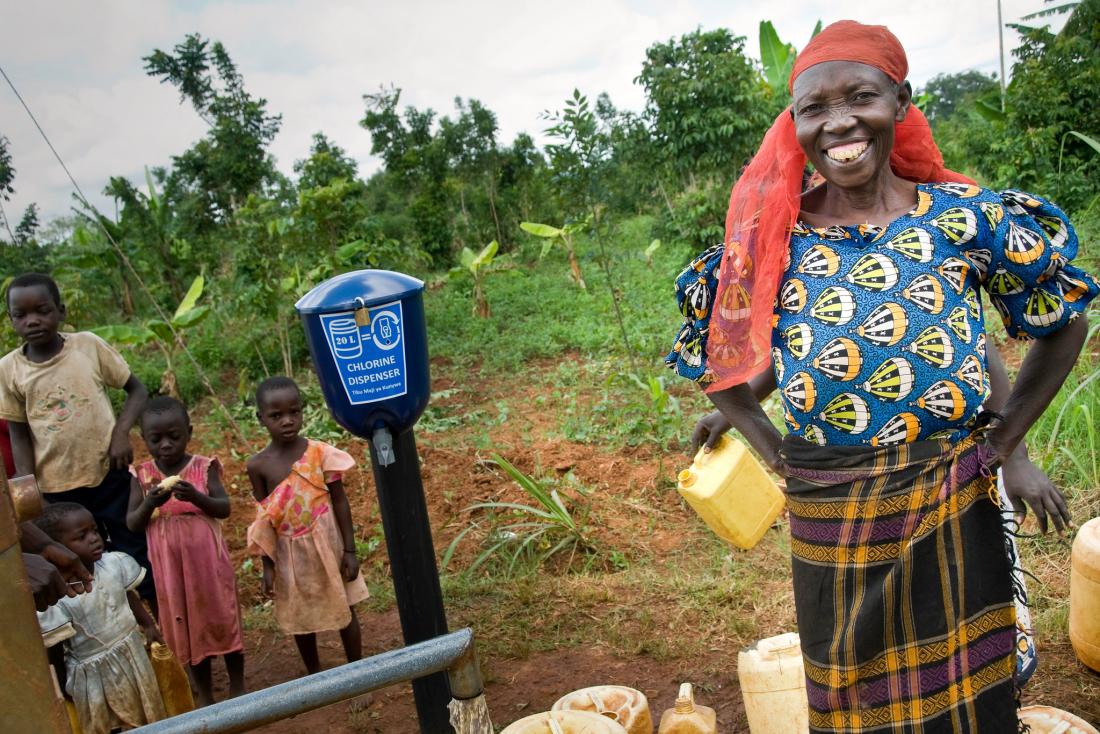 A woman and children are standing next to a chlorine dispenser installed at a water source in a village in Kenya.
Photo: Jonathan Kalan | DIV at USAID | CC BY-NC-ND 2.0

Researchers evaluated the impact of psychological interventions on the take-up of chlorination, as well as on a number of other health and economic behaviors. 3,750 women aged between 18 and 35 years in 205 villages in Bungoma and Kakamega counties participated in the program. The target population was chosen because women are primarily responsible for collecting water, and women within this age range were most likely to have small children, who are most vulnerable to water-borne illness. The researchers randomly assigned participants into three “active” program groups and one comparison group.

The visualization intervention increased chlorination of water, decreased child diarrhea episodes, and was cost-effective. Effects extended to non-health outcomes, including savings and labor supply, and were visible almost three years after the initial intervention. By contrast, the planning intervention had minimal impacts.

The number of diarrhea episodes per child under the age of five in the Visualization group decreased by 0.16 episodes, from a base of 0.34 episodes (a 47 percent decrease) after 10 weeks. This effect did not persist over time, although this may have been due to seasonal effects, as the long-run data collection occurred during the dry season, when diarrhea is more likely to be caused by airborne viruses.

By comparison, the Planning intervention had positive but insignificant effects on objective chlorination measures and no impact on diarrhea outcomes for children under five years of age after 10-12 weeks.

The Visualization intervention was also cost-effective: Delivery of the intervention costs approximately $4 per household. The estimated cost per Disability-Adjusted Life Year (DALY) saved ranges between $62 and $248, depending on assumptions about the duration of the effect on diarrhea, and on whether benefits to children under five or fifteen years old are considered. The estimates are well within the WHO’s highly cost-effective category (up to $1508).

Visualization and planning both led to greater beliefs in ability to achieve desired outcomes: After ten weeks, both the Visualization and the Planning groups showed increases in the belief that they are able to achieve desirable outcomes and overcome obstacles—a concept that psychologists call "self-efficacy." It was measured by asking participants' agreement to statements like “I always manage to solve difficult problems if I try hard enough.” This result showed that both Visualization and Planning interventions strengthened the connections that participants make between their behavior in the present and desired outcomes in the future. While both groups were affected, the observed effects were stronger and more long-lasting in the Visualization group. After 30 to 36 months, participants in the Visualization group maintained higher levels of self-efficacy than those in the Planning group (0.14 SD difference), consistent with the differential long-term effects on chlorination. Furthermore, participants in the Visualization group were better at vividly imagining themselves and their family in the future. There were no detectable differences between the groups in time preferences over effort or money, planning skills, or attitudes toward risk.

Visualization also had impacts on non-health outcomes: The Visualization and Planning treatments were not specific to chlorination, but considered many examples of daily behavior, inspired by the participants'; own ideas. Visualization led to a higher amount of money saved regularly per week. This effect persisted after almost three years, by which point the Visualization group had accumulated 41 percent higher savings. Visualization participants also joined more rotating savings and credit associations, and saved more for productive investments (education, business, agriculture). Beyond savings outcomes, Visualization participants worked 2.3 hours more in the last seven days than comparison participants, on a base of thirteen hours (an 18 percent increase), 30-36 months after the intervention. A likely explanation is that some participants used the Visualization sessions to develop longer-term career visions, including applying for salaried jobs. This increased their labor supply in the long-run.