Understanding Each Other: Improving Inter-Ethnic Cohesion in Schools in Turkey

The program encouraged students to be more inclusive and reduced ethnic segregation: Refugee children who attended the program were 7 percentage points more likely to form a friendship with a Turkish host classmate than comparison students. They were also 12 and 10 percentage points more likely, respectively, to receive emotional and academic support from host classmates than their counterparts who did not participate in the program.

Students from the program demonstrated more socially positive behaviors, such as trust, reciprocity, and altruism. 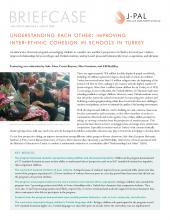