What Can We Learn from Charter School Lotteries in the United States? 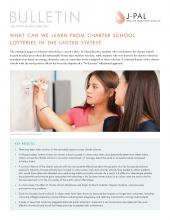