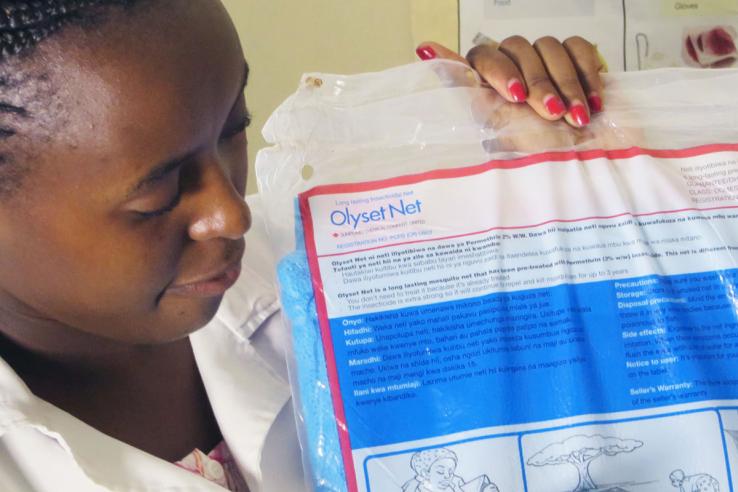 A series of randomized evaluations by J-PAL-affiliated researchers on the best pricing strategies for preventive health products has helped shift the global debate in favor of providing life-saving products, such as insecticide-treated bednets, for free. By demonstrating that providing preventive health products for free increases takeup, this research has helped organizations rethink their approach to user fees in order to increase their reach.

Despite a large reduction in the global malaria burden over the past two decades, malaria still claims hundreds of thousands of lives each year.

In 2016, there were an estimated 216 million cases and an estimated 445,000 malaria deaths globally. Approximately 91 percent of these deaths occurred in sub-Saharan Africa, affecting primarily children under five years of age.1 Public health experts and officials have long agreed that prevention through widespread use of insecticide-treated nets (ITNs or bednets) is a highly effective method of preventing malaria transmission. Yet, for many years, ITN coverage has been low among the most vulnerable groups, such as pregnant women and children under five.

Bednets and many other preventive health products, such as deworming medication and water purification treatment, have positive effects that can extend beyond the individuals using them; for example, sleeping under an ITN can reduce not only one’s likelihood of contracting malaria, but also the rate at which malaria spreads within the community.

Standard economic analysis implies that to maximize take-up, these goods should be provided at zero cost to the user. However, there is a long-running debate on whether beneficiaries of these public health programs should bear some of the cost. Many have argued that charging a nominal price for health products will save resources by screening out people who would not use the product and increase the likelihood that those who have bought it will actually use it. Charging fees may also raise revenue to make programs more sustainable. Conversely, others have argued that cost-sharing may decrease program coverage by reducing demand. In addition, if those most vulnerable to malaria are also less likely to be able to afford even a small price, then charging fees could significantly reduce the health benefits of the partial subsidy.

J-PAL affiliated researchers conducted more than a dozen randomized evaluations in eight countries to empirically test the arguments underlying this debate, and evaluate how pricing affected take-up and use of various preventive health products.

To test whether it is preferable to freely distribute bednets or to require a co-payment by recipients, J-PAL affiliates Jessica Cohen (Harvard University) and Pascaline Dupas (Stanford University) set up a randomized evaluation to evaluate the impacts of different subsidies on take-up and use of ITNs when delivered to pregnant women in Kenya. In sixteen randomly selected health clinics, ITNs were offered at a subsidized rate, with the discount varying between 90 and 100 percent of market price.2

Researchers found that ITN take-up was 60 percentage points lower when the price was US$0.60 than when it was US$0 (i.e., at a 90 percent instead of a 100 percent subsidy). Furthermore, the majority of women who received ITNs for free put them to proper use, and there was no statistical difference in usage rates between women receiving the ITN for free and those who paid for the product. Altogether, the share of pregnant women covered by an ITN at clinics with free distribution was 65 percent, compared with 15 percent at clinics charging US$0.60 for the ITN. Given the large benefit to the community associated with widespread usage of insecticide-treated nets, the considerably higher coverage rate under free distribution, and the fixed costs of the program, these results suggest that free distribution of ITNs is both more efficient and more cost-effective at reducing malaria than charging fees.

A similar study focused on the general population, rather than only pregnant women, found similar results held over time: after a year, coverage rates remained considerably higher when ITNs were given for free rather than sold. J-PAL affiliates have also conducted evaluations on other preventive health products such as deworming medication, water disinfectant, and handwashing soap. These evaluations, taking place in contexts where participants had very low ability to pay, all pointed to the efficacy of subsidizing user fees for key preventive health products by eliminating cost-sharing when possible.

For more details, see the evaluation summary and the related policy insight.

The clear direction of findings across contexts and products helped shift policy in favor of reducing user fees for key preventive health products.

This research played a part in shifting global opinion to support free distribution of key preventive health products. Many organizations reconsidered their policies to charge for health services and opted instead to distribute ITNs and other health products free of charge.

A number of influential organizations now recognize that the elimination of user fees is the most effective way of quickly increasing take-up of key preventive health products. These groups include the United Kingdom Foreign, Commonwealth and Development Office (FCDO), the United Nations Millennium Project, and the World Health Organization.3 In 2009, the British government cited the study by Cohen and Dupas in calling for the abolition of user fees for health products and service in poor countries.4

For some groups, supporting the abolition of user fees marks a shift from their traditional models. Population Services International (PSI), a leader in malaria prevention that provides malaria control support to national Ministries of Health in over thirty countries worldwide, has historically supported the practice of cost-sharing for ITNs. Today, PSI’s bednet delivery strategies include routine facility-based delivery, mass free distribution for rapid scale up, and continued engagement of the private sector in some locations.

GiveWell cites J-PAL research in their endorsement of the Against Malaria Foundation (AMF)—an NGO that provides funding and supports free distribution of long-lasting insecticide-treated nets in developing countries—as one of its top charities.5 In 2021 alone, GiveWell gave more than US$15 million in funding to AMF, enough to procure 3.1 million bednets (at an average cost of US$5.14 per bednet).6

This shift in strategy has helped contribute to reductions in the global malaria burden. Malaria bednet ownership rates amongst at-risk households increased by 30 percentage points between 2010 and 2016.7 Health officials hope this increased ownership can contribute to achieving the WHO target of reducing malaria incidence by at least 40 percent by 2020 relative to 2015 levels.

12 result(s)
Give cash to the poor, and they’ll squander it? This Nobel laureate has a different opinion
Tricking people into being healthy
To Solve a Social Problem, You Need More than a Theory—You Need a Randomized Controlled Trial
Evaluating The Best Ways to Give to the Poor
Name Your Price - It's Your Life
To Use or Not to Use: Getting People to Adopt New Health Technologies
Fighting Malaria: Will U.S. Cuts Hurt Global Effort?
Anti-malaria Bed Nets v F-35s
Sachs Not Vindicated
Gordon Brown's Article on Universal Healthcare
Charity vs. Capitalism in Africa
A Handout, Not a Hand Up