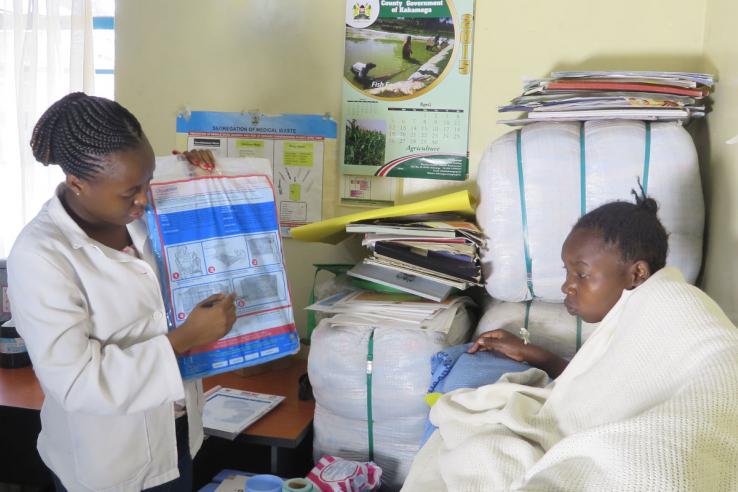 A woman receives an insecticide-treated bednet at a health clinic in Kenya.
Photo: Thomas Chupein | J-PAL

There are many highly cost-effective, medically proven preventive health products for which unsubsidized take-up has been low. Examples include insecticide-treated bednets, water purification products, and latrine slabs for safe sanitation. Take-up of these products is critical to reducing disease burden not only because they improve an individual’s health, but also because they contribute to public health by helping to break the cycle of transmission for infectious diseases. These spillover benefits can be very large, providing an important policy rationale for subsidizing preventive health products. For example, at high levels of bednet coverage, the benefit to those without a net can be substantial[1][2]. There has been a long-running debate among policymakers about whether to charge fees to consumers in low-income countries for key preventive health products, amid concern that free distribution could lead to wasteful spending of resources on households that are not willing to expend the effort to use the product.

To address this question, economists have conducted more than a dozen randomized evaluations in eight countries over the past fifteen years to rigorously evaluate the impact of pricing on take-up and use of various preventive health products. These pricing studies have generated a compelling body of evidence that yields a clear policy insight: subsidize user fees for key preventive health products and eliminate cost-sharing when possible.

Purchase rates drop off quickly as prices increase. Across time, countries, and type of product, increases in fees for preventive health products are associated with substantial drop-offs in purchase (see the graph below). When a program in Kenya moved from free provision of deworming tablets to charging an average price of US$0.30 per child, take-up fell from 75 percent to 18 percent [3].Another study in Zambia found that purchase of chlorine disinfectant fell from 76 percent to 43 percent when prices increased from US$0.09 to US$0.25 [4]. This decline in the purchase rate as price increased held even when the user fee represented a small fraction of the true market cost of the product. For example, take-up of insecticide-treated bednets among pregnant women at antenatal care clinics in Kenya dropped by 60 percentage points (from 99 percent to 39 percent) when the price increased from zero to US$0.60 [5]—an amount that still represented a 92 percent subsidy of the US$7 market price [6].

Note: this graph was calculated based on publicly available data from each study. Offered price indicates the price at which households were offered the health product. The dollar price in the legend indicates the retail price of the product, and the information in parentheses indicate the place and year in which the take-up rate was measured.

The drop-off in purchase rate occurs even among households that could highly benefit from the product. This means that user fees can exclude populations in need of the product. Many policymakers have argued that user fees help allocate scarce resources to people who need them the most, and that those willing to pay for a product are more likely to expend the effort required to use it. There is little evidence to support either claim. One study in Kenya testing the effect of prices on bednet take-up and use among pregnant women found no evidence that cost-sharing increases the likelihood that bednets end up in the hands of women who need them the most. Those who paid higher prices were no sicker than those in the comparison group, as measured by anemia status, an important indicator of malaria [5].* The study also found that those who take the bednets for free are just as likely to use them as those who pay more (see the graph below). Another study from Kenya showed that parents of primary school students with a higher level of worm infection were no more likely to pay for deworming drugs than those with healthy children [3]. A study in Zambia found no evidence that households with greater potential for health gains (as measured by number of children under age five, and whether the female head of household is pregnant) were willing to pay more for a water purification product [4].

Due to drop-offs in take-up among most-at-need populations, charging fees may make an intervention less cost-effective. Policymakers have argued that revenue earned from cost-sharing is critical to programs’ financial sustainability. However, because higher prices discourage take-up, fees often raise little revenue, and the fixed costs of managing programs remain high. For example, in the Kenya deworming study described above, fewer families chose to deworm their children when fees were charged, resulting in much higher net costs per child. Overall, the researchers found that the program cost per child dewormed under cost-sharing was more than twice as high under free distribution (US$4.26 versus US$1.48), and far fewer children received treatment [3]. In the Kenya bednet study described above, researchers estimate the cost per child life saved is at best marginally lower under cost-sharing, but free distribution leads to many more lives saved [5].

Information campaigns are not enough to mitigate the drop-off in demand with price. Many products have been on the market for a long time and are well known to consumers. Others may be less well known but providing information about them does not increase take-up at high prices. In one set of studies conducted across four countries that provided information about the benefits of different types of preventive health products such as rubber slippers to prevent against worm infection, soap, and multivitamins, information alone had no effect on consumers’ willingness to pay for the products [7]. In the Kenya deworming study, researchers found that providing information about worm prevention had no effect on adoption of worm-prevention behaviors [3].

Increasing access to cash, credit, and savings can mitigate the drop-off in purchase rates. Households in lower-income countries not only have low incomes, they often do not have access to credit or savings that could help them fund these purchases. In Uganda, when households were given a two-week notice about an opportunity to buy a bednet at a group meeting, they were willing to pay on average US$2.34 of their own money for a bednet. When the research team provided people with enough cash to buy a bednet, they were willing to pay more than twice that amount [8]. In a study in Kenya, giving people three months to raise the money to purchase bednets led to a less dramatic decline in take-up as price increased, suggesting that allowing people time to save up for a purchase could reduce their price sensitivity [9]. Also in Kenya, a study found that investment in preventive health increases significantly when households gain access to new saving products [10]. Researchers in India found that, among households offered a loan to purchase a full-priced bednet, 52 percent purchased at least one. In contrast, a follow-up study by the same researchers five years later found that when provided the opportunity to purchase a subsidized bednet with cash on the spot, only 11 percent of households bought at least one [11]. This study suggests that credit can alleviate important cash constraints that individuals who wish to invest in preventive health products face.

Demand is also sensitive to non-monetary costs; improving convenience to access preventive health products can increase take-up. Consumers not only face monetary costs when deciding whether to buy a product, but also non-monetary costs like the time it takes to visit the shop. Recent evidence suggests that reducing such time costs can increase take-up of subsidized products. Several studies demonstrate that improving reliability and convenience can improve adoption of free health care products and services such as iron-fortified flour [12]; HIV test results [13]; and child immunization [14].

Recipients of subsidized health products are as likely to use them as those who pay full price. A review of five randomized evaluations examining the relationship between the price of preventive health products and usage found that for most products, usage is as high among beneficiaries of free distribution as among households who pay for the product. The graphs below demonstrate that measured usage of various health products is often high and generally uncorrelated with actual price paid in the short and longer run.

Note: these graphs were calculated based on publicly available data from each study. Usage rates were calculated based on observed measures of use verified by independent observers or by self-reported usage if observed measures were unavailable. The transaction price is the price at which households purchased or received the product. The dollar price in the legend indicates the retail price of the product, and the information in parentheses indicate the place, year, and length of follow-up from the original intervention at which the usage rate was measured.

For some products, many people have no interest in a product even when provided for free. In cases like this, imposing small non-monetary costs for obtaining the subsidized product rather than charging user fees can ensure that low-income households can still access the product, without wastage on those who are not interested. In Kenya, requiring households to redeem vouchers for free chlorine screened out 88 percent of households who would have accepted the product under free provision, but would not have used the chlorine to treat their water. Importantly, this voucher system did not decrease the number of households that actually used the chlorine [15]. In China, requiring parents to redeem vouchers for free eyeglasses for their children screened out 12 percent of children who would not have used the free eyeglasses if they were directly distributed at school. The voucher system did not decrease the number of children that actually used the eyeglasses [16]. Another study in Kenya found that community dispensers, through which households can obtain the needed amount of chlorine at the point of water collection, are a good way to increase usage without wasting subsidies on non-users [17].

*Note: Anemia is a WHO-recommended indicator of malaria prevalence. However, it is not always a perfect indicator, as anemia can be influenced by many other health factors, such as malnutrition. Tarozzi et al. 2014 found that households’ anemia levels were not correlated with likelihood of purchasing a bednet in India, but did find that other indicators of sickness, including self-reported malaria cases and malaria prevalence measured by blood tests, increased the likelihood of purchasing a bednet [11].