Books or Laptops? The Cost-Effectiveness of Shifting from Printed to Digital Delivery of Educational Content in Honduras

The impact of technology use in education is an increasingly salient topic around the world. Researchers partnered with the Honduran government, who introduced a school laptop program, to evaluate the impact of replacing textbooks with laptops on student learning. Using laptops resulted in no change in learning outcomes, suggesting that laptops could be a cost-effective substitute to textbooks if they can replace enough textbooks.

Over the past 20 years, the use of technology for education has increased in many regions of the world.1  This is especially true in Latin America and the Caribbean, where 31 countries had implemented information and communication technology policies in schools by 2012,2  and governments and private providers have distributed around 10 million laptops to public schools.3

Despite these increases in computer use, its relative impact on student learning compared to traditional methods remains unclear. On one hand, laptops may support traditional instruction by providing additional learning opportunities and computational tools, information storage, and communication opportunities. However, other studies suggest that using computers might decrease learning by distracting students4 or reducing student-teacher interactions.5

Honduras is a low middle-income country.6  As of 2013, Hondurans received, on average, twelve years of schooling.7

The study took place among 271 Honduran public schools, with 9,600 students in third and fifth grade. Around 80 percent of schools were in rural communities, and all schools were in communities with a poverty rate of 58 percent or higher at the time of the study. On average, teachers had fifteen years of work experience, schools had 181 students, and classrooms had one teacher for every thirty students. 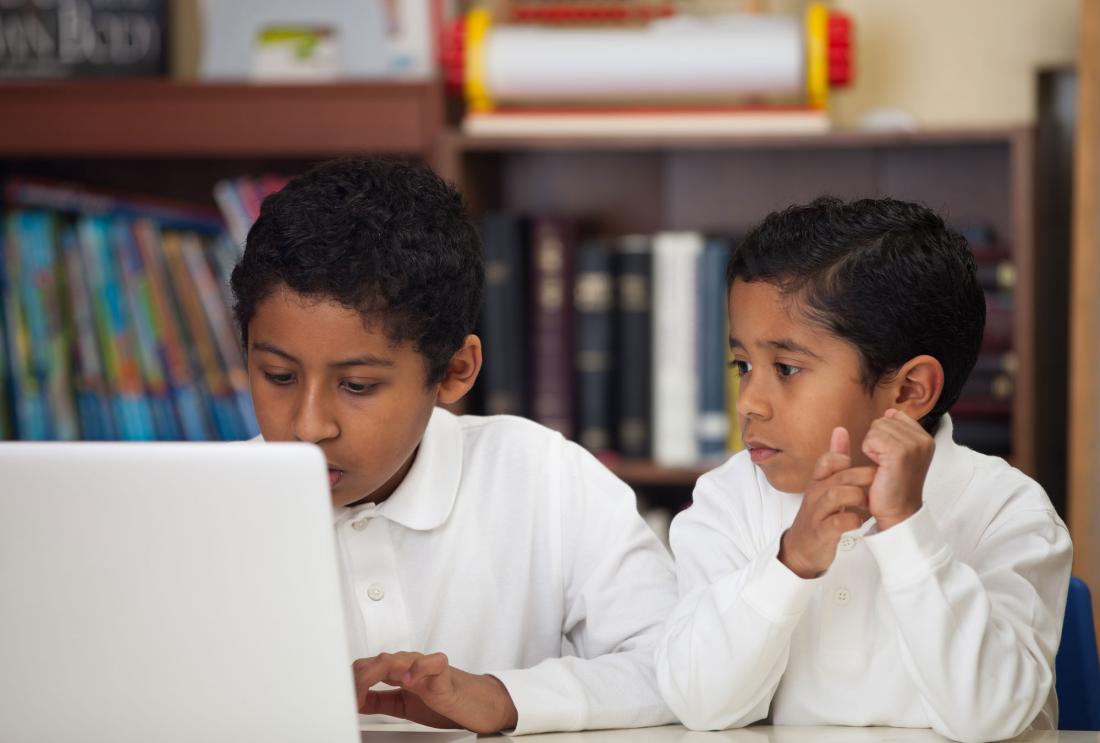 Students use a laptop for in-class learning.

Researchers partnered with the Honduran Ministry of Education to conduct a randomized evaluation that tested the impact of laptops on student learning.

In 2013, the Honduran Government introduced the Educatracho program to improve the quality of education in elementary schools in low-income areas. The program provided an XO 1.75 laptop, developed by the non-profit group One Laptop per Child, with free software programs and mathematics and Spanish textbooks adapted for on-screen use. The laptops also contained basic interactive exercises that did not adapt to users' learning patterns.

Toward the beginning of the 2013 school year, which ran from February to November, the Ministry of Education delivered laptops to treatment schools and mathematics and Spanish textbooks to comparison schools. Researchers collected follow-up data that October.

Laptops appeared to cause no change in student learning outcomes compared to textbooks. Furthermore, these findings suggest that laptops could be a cost-effective tool if they replace more textbooks.

Take-Up: The program more than doubled the share of students who used computers at school, from 43 percent in the comparison group to 98 percent in the treatment group.

Student Learning: Both laptops and books resulted in similar learning gains. At the end of the school year, both groups improved test scores by 0.46 standard deviations.

Digital Skills: The laptop program seemed to have an effect on digital-related skills. Researchers estimated the future wage gains provided by digital literacy to be worth US$35 per student in 2013.

Cost-Effectiveness: Researchers estimated the cost of laptops per child for one year  (including technical assistance, Internet, and school training) at US$95 in 2013. They calculated the benefit per child to be US$63, which included money saved from replacing two textbooks, as well as students’ future wage gains from computer skills. Thus, the net cost per student of the laptop program was US$32. However, if each laptop replaced three additional print books (five total) it would become cost-effective. Since student learning outcomes were comparable when using printed textbooks and laptops, and computers continue to become cheaper, laptops could serve as a cost-efficient learning tool.